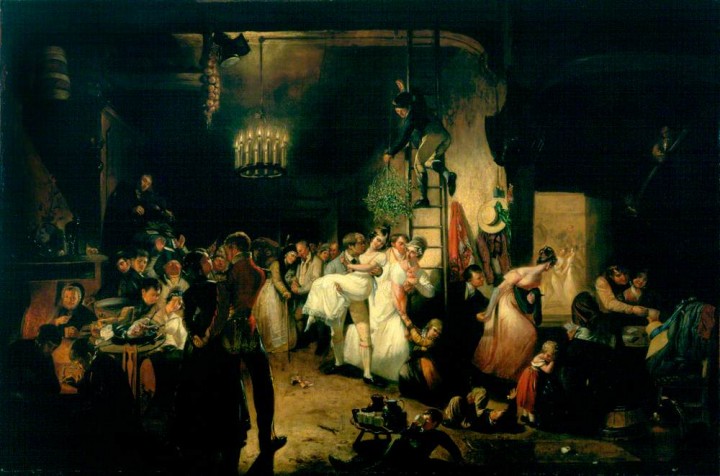 For our first favourite on a Christmas theme, we've selected a painting by Sir William Allan, himself one of the Great and the Good, elected President of the Royal Scottish Academy, appointed the Queen’s Limner and knighted in 1842. However, his bewitching Christmas Eve reveals Allan at his most bohemian and pleasure loving, worthy of one who relished the theatricality of life, not to mention the theatre itself, as his portraits of actors reveal. The focus in Christmas Eve is on the young couple flirting outrageously under a generous bunch of mistletoe. Such indecency would have scandalised presbyterian society of the day, which is why the scene is set in a candlelit hideaway radiating warmth and geniality.

Indeed, such a public display of Christmas spirit would have brought down on Allan’s head the fire and brimstone from one of his favourite historical  subjects, John Knox, whose Calvinism inspired the banning of Christmas in Scotland in 1640. This Calvinistic legacy lived on until 1958 when Christmas was finally declared a public holiday in Scotland, paving the way for uninhibited carolling, feasting and canoodling as displayed so beautifully and joyously in Allan’s subversive painting. 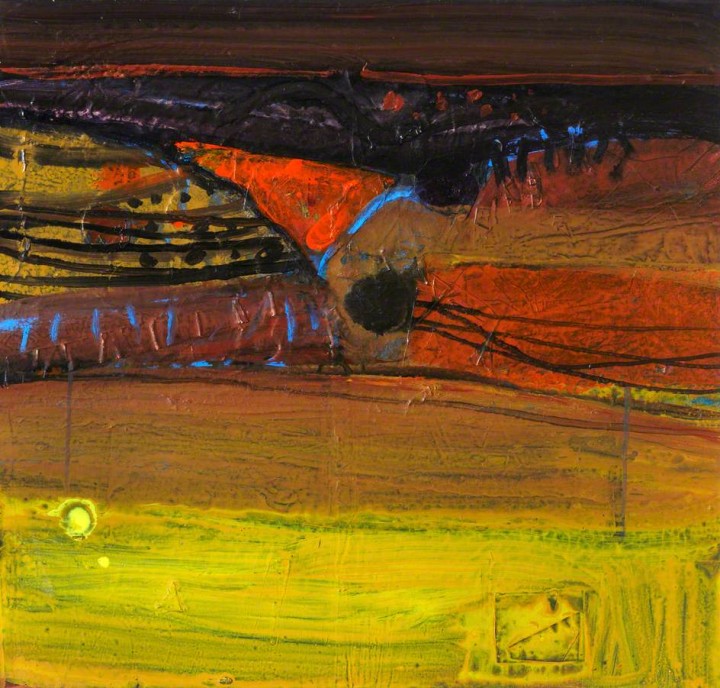 In contrast, our second choice looks at a painting by the contemporary artist Barbara Rae, that is, typically of her style, full of abstracted colour. Using oil and mixed media on paper collage, Rae's painting Christmas - Ronda is suggestive of a hot landscape, far from the chill of Scottish winters. The reds and oranges form horizantal bands as if they depict differing levels of the horizon or instead layers of rock.

Ronda is the name of an Andalucian town set high up on the El Tajo canyon, where the terracotta roofs sit atop sandy strips of earth and mountain. This shows the influence of the artist's travels (across the world but in particular in Spain) on her practice. Much like the light of the southern French coast that infused the paintings of the Fauves a century ago, here Rae imbues her painting with the heat of the southern Spain.

Within this earthy terrain, an ambiguous red, conical form stands out. It could just be an element of the landscape, a jagged outcrop of rock or a slanting roof, but it is also reminiscent of Father Christmas' hat (perhaps a coincidental connection jogged by the artwork's title or a trigger for it), an object so often thought of as woollen and warm that it seems out of place, yet paradoxically part of the scene. There's something quite sinister to the form as well, so that it becomes an image of a Christmas subject depicted in an entirely unexpected way. 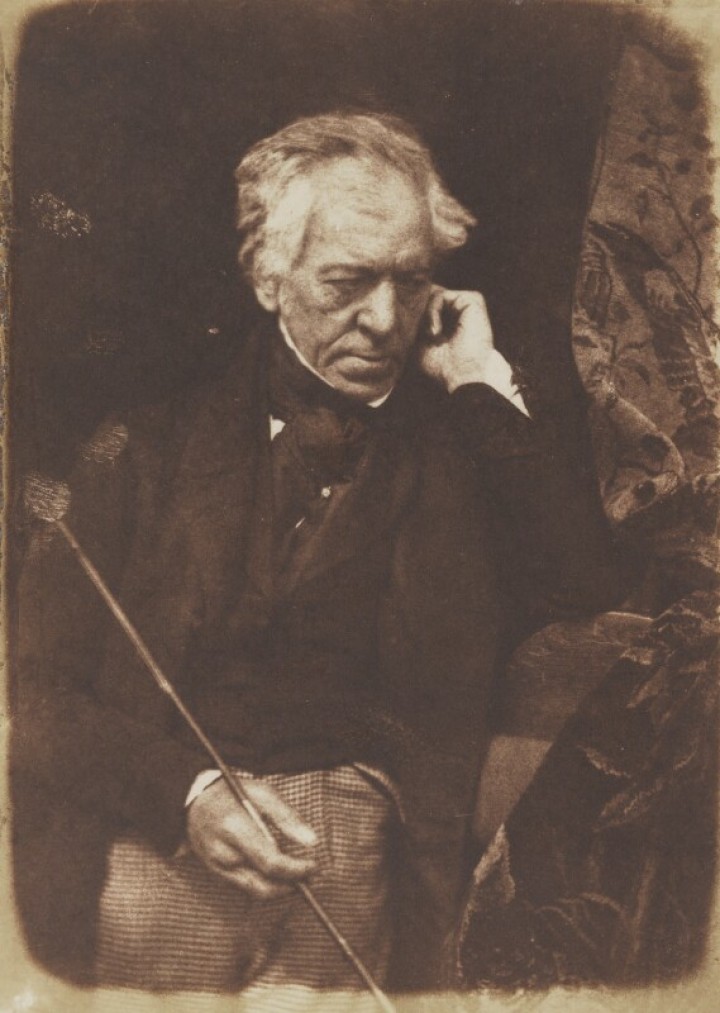 Sir William Allan RA (1782 – 1850) was born in Edinburgh and studied at the Royal High School. He showed an aptitude for art at a young age and was apprenticed to a coach-painter before studying at the Trustee’s Academy alongside Sir David Wilkie RA, who became a lifelong friend. Allan went on to study at the Royal Academy in London but found little success so embarked on travels to Russia in 1805, surviving a shipwreck en route. Over the next seven years he explored much of the country and elsewhere in Eastern Europe and Central Asia.

He returned to Scotland in 1814 with a group of paintings recording the exoticism of his travels which led one contemporary to describe as ‘a feast of perfect novelty’. Allan settled in Edinburgh, where through his becoming Master of the Trustees Academy and through his close association with both Wilkie and Sir Walter Scott, he became one of the most influential painters in Scotland shaping the course of future generations of narrative painters. 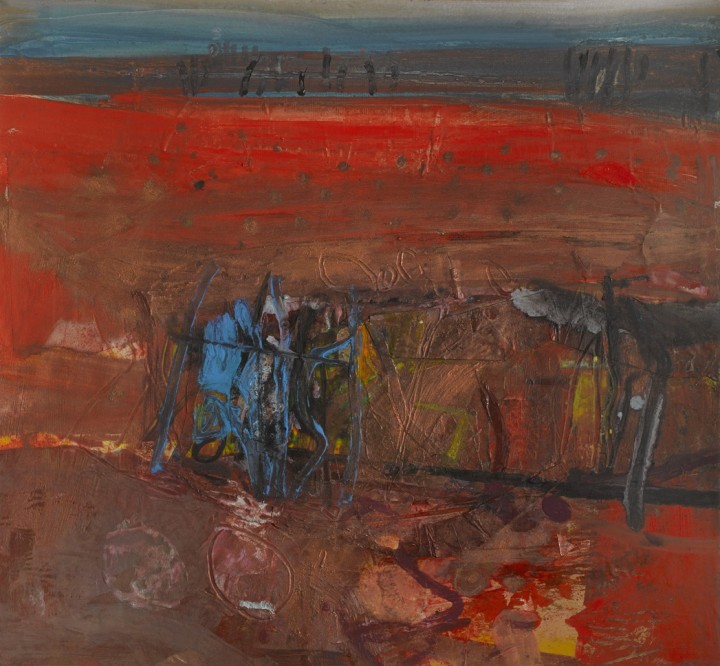 Barbara Rae CBE RA FRSA (b. 1943) was born in Falkirk and studied at Edinburgh College of Art, graduating in 1965 with an award of a travel scholarship, taking her to France and Spain. This began a life long passion for travels, the influence of which forms a blend of landscape and painterly abstraction. Although she does not agree generally with the term landscape painter, but the importance of place is apparent in her works, particularly in how human or historical traces are left on the landscape.

Rae's first solo exhibition was in 1967 at the New 57 Gallery in Edinburgh. Rae then went on to teach and lecture art in Edinburgh, Aberdeen and Glasgow. Rae was elected President of the Society of Scottish Artists in 1983, a member of the RSA in 1992 and a Royal Academician in 1995. In 1999 she was awarded a CBE and received an Honorary Doctorate from Napier University, Edinburgh. Rae lives and works in Edinburgh. Other work by Barbara Rae in the Fleming Collection can be found here.