This small medal created by Finlay in 1983, powerfully conveys the qualities which make his work so inexhaustibly fascinating and trite, irritating and profound, and which make him one of the greatest Scottish artists of the 20th Century. Simply made, almost childish, it perfectly encapsulates Finlay's unique ability to make the pastoral and the classical edgy and unsettling. Here the calm certainty of the classical orders is visually rhymned with the terminal menace of the guillotine. In Finlay's own words 'the guillotine represents (of course) Terror, the classical columns (a visual 'rhyme' borrowed from Puvis) not only terror's reverse - here obverse - Jacobin Virtue, but the true revolutionary mode'.

Among the quotations which he selected to illuminate the work are 'A republican government has virtue as its principle, or else terror. What do they want who want neither virtue nor terror?' (Saint-Just, after whom Finlay named his 'Saint-Just vigilantes') and lastly one of his own 'Terror is the piety of Revolution'. We should not make the mistake of imagining that this was said in jest and yet at Little Sparta Finlay created one of the world's most beautiful and contemplative gardens. Contradiction was his essence. 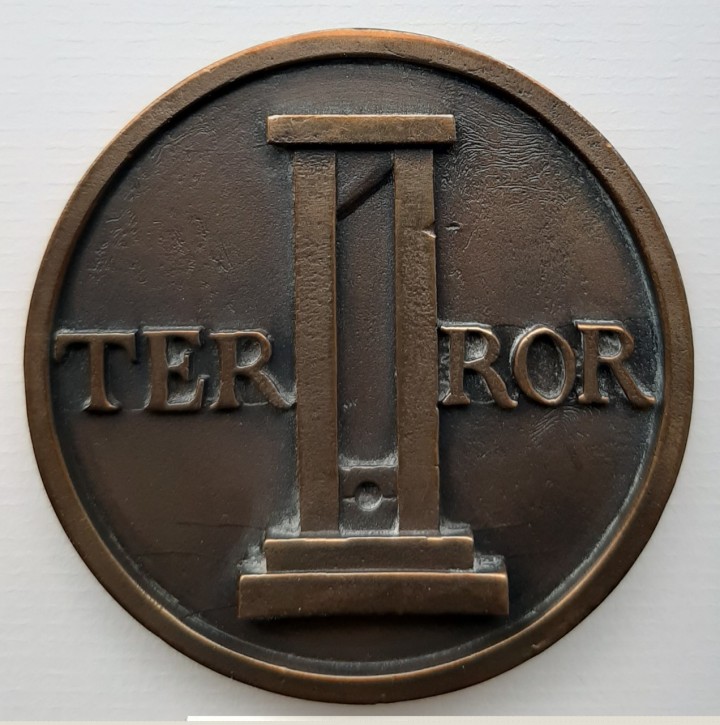 Ian Hamilton Finlay, Terror / Virtue, 1983. Cast bronze, 52.5mm. In an edition of 43, plus a number sold by the artist. Ⓒ The Estate of Ian Hamilton Finlay.
Sir Mark Jones (b. 1951) is a British art historian, numismatist and museum director. After studies at Oxford and the Courtauld Institute of Art, Jones spent 18 years in the Department of Coins and Medals at the British Museum, and indeed has written extensively on the history of the medal, fakes and forgeries, as well as topics of  collecting, museums and restitution. Jones became Director of the National Museums of Scotland from 1992 to 2001, overseeing the project to create and open the ‘Museum of Scotland’, which went on to won numerous awards.
Having since held the position of Director of the Victoria & Albert Museum, London, and Master of St Cross College, Oxford, Jones is based in Scotland once more, as a trustee of Tullie House, Chair of Hospitalfield, and most recently, as Chairman of the National Trust for Scotland. He holds numerous other positions in cultural and charitable organisations, as well as owning the book shop, Golden Hare Books in Edinburgh. 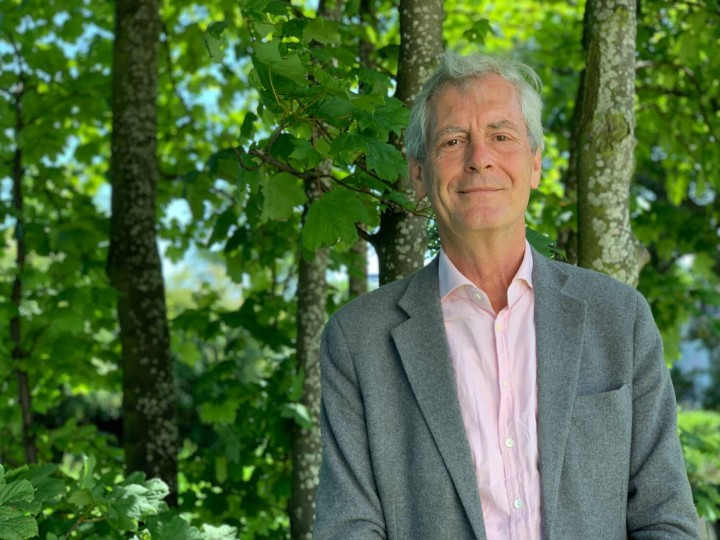 Sir Mark Jones.
Ian Hamilton Finlay (1925-2006) was born in the Bahamas to parents of Scots descent, but brought up in Clackmannanshire until he was evacuated at the start of WWII to Orkney. He later attended Glasgow School of Art but did not complete his degree. From 1944-47 he served as a non-combatant in the Service Corps, partly in Germany. Back in Scotland, he worked as a shepherd while making his name as a poet, writer and artist. By the 1960s, he had developed a poetic language expressed through graphics, visual imagery and stone letter cutting, establishing himself as a ‘concrete poet’ later marrying these techniques with formal sculptural concerns to pioneer a new kind of conceptual art.
Over the next four decades, he won international renown through the transformation of a small farm in Lanarkshire into ‘Little Sparta’ where he revived the ‘Neoclassical tradition of the garden as a place provocative of poetic, philosophic and even political thought.’ There and elsewhere, Finlay's art investigated the power of images and symbols, particularly those associated with militarism, politics, revolution, classicism and man’s relationship with nature. Creating an analogy between war and the forces of Nature, he highlighted the thin line that exists between creation and destruction, order and disorder, culture and chaos. Two years prior to Finlay’s death in 2006, a poll conducted with artists, gallery directors and arts professionals in Scotland voted ‘Little Sparta’ the most important work of art ever produced in the history of Scottish art.
Explore works by Ian Hamilton Finlay in the Fleming Collection here.