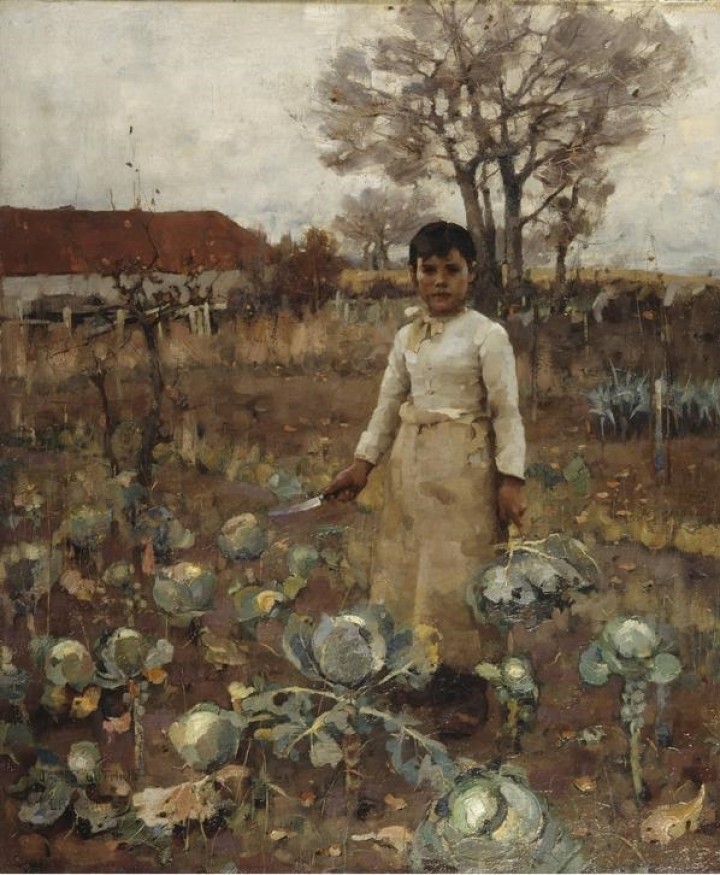 A Hind’s Daughter (1883) by Sir James Guthrie has long been one of my favourite paintings. From an early age I can remember trips to the Scottish National Gallery in Edinburgh, where I would look forward to entering the section where The Glasgow Boys paintings hung, and I could spend time with the little girl in the cabbage patch. There remains a deep and long standing appeal for me in the naturalism and keen observation of this everyday scene. From the attention paid to describing the form, volume and subtle colour shifts across the cabbage leaves, to the somewhat dreich day with it’s flat light, it feels like an extremely Scottish painting both in subject and execution.

The modelling of paint to describe cabbages and other green vegetables is something I also enjoy in The Vegetable Stall by fellow Glasgow Boy, William York MacGregor, which used to hang near A Hind’s Daughter in the gallery. Guthrie’s painting, however, has always had much more to enjoy for me than simply an appreciation of paint handling. Like all my favourite works of art, there’s an element of mystery or unease in it. In this case, the sense of disquiet is created by the inscrutable gaze of the girl who looks back, and the slight menace this stare adds to the knife she holds in her hand, emphasised by the flash of blue/violet paint on the end of the blade. I’ve always wondered what she’s thinking, in the same way that I wonder what the internal monologue of Manet’s barmaid in A Bar at The Folies-Bergere (1882) would be. 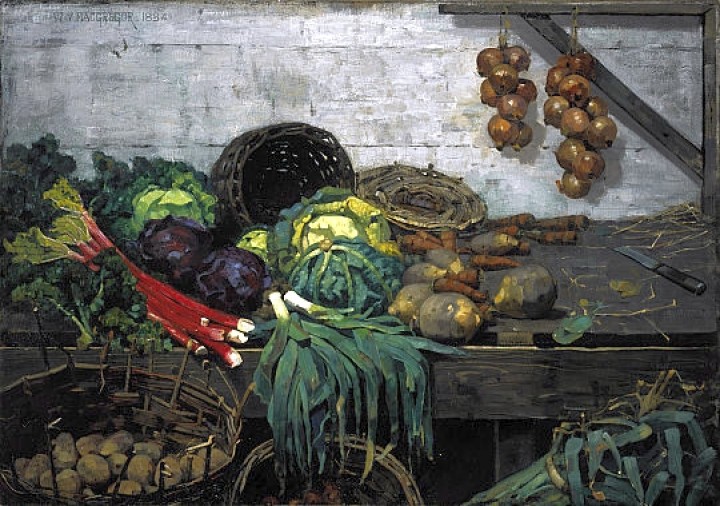 My love of A Hind’s Daughter led me to undertaking a copy of it when I was 18 years old, after making a copy of another Guthrie painting from the 1880’s (Old Willie: The Village Worthy) as part of a 1st year project at Glasgow School of Art. I spent my summer back at home in Dunfermline, working at a hotel and painting my homage to Guthrie in my bedroom. I learned a lot from observing in detail A Hind’s Daughter, but trying to emulate the brushwork and colour modulation of this painterly realism taught me so much more. I think this was a key lesson at a time when I was still developing my own language in paint. My work focuses on portraying the lives of women, and most recently, the work they do. In A Hind’s Daughter Guthrie depicts a scene from the working life of a young girl. As I learn more about my practice and the lives of the people I depict I find myself as drawn to this painting now as I was 30 years ago. Maybe it also demonstrates to me that my interests haven’t strayed far since I was a girl myself. 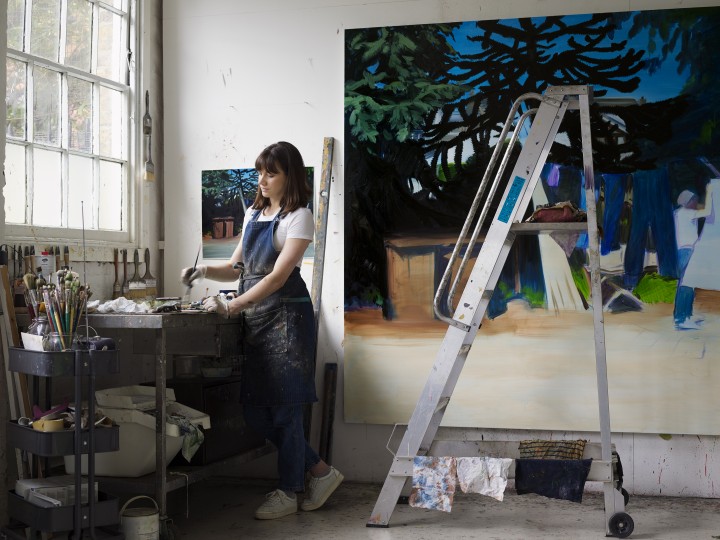 Caroline Walker in the studio, 2020. Photograph by Peter Mallet. Courtesy of the Artist and Grimm, Amsterdam | New York.

Caroline Walker (b. 1982) was born and raised in Dunfermline, Scotland and studied painting at the Glasgow School of Art (2000-200) before continuing with a masters at the Royal College of Art, London (2007-2009). In a 2019 interview for 'It's Nice That', Walker described how it was the Scottish colourist paintings of the Kirkcaldy Museum, as well as Raeburn, Gainsborough and the Glasgow Boys shown in the Scottish National Gallery that drew her to art.

Walker is known for her paintings of intimate scenes depicting mostly anonymous women, often at work, unaware of the viewer. Her most recent series of work ‘Janet’ focuses on her mother absorbed in her own domestic work in Walker’s childhood home. The scenes hint at the uncertain boundary between the public and the private. The artist works from photography, either through constructed scenarios or a documentary approach. From then her process involves building up from preparatory sketches to large-scale oil paintings, a grand and traditional format. For her, it is the evocative tactility of oil that draws her to the medium.

On graduating from RCA, she was awarded with numerous prizes, including the Valerie Beston Young Artist Award, leading to her first solo exhibition at Marlborough Fine Art, London. Since then she has had solo exhibitions internationally, including in New York, Milan, Seoul, Amsterdam, Cambridge and now Edinburgh. Her work is held in international collections, including the Kunstmuseum den Haag, Netherlands, the National Museum Wales, the UK Government Art Collection, Shetland Islands Council, Lerwick and The Franks-Suss Collection, London, and the oil study Study for Table Laying, Late Morning, has recently been acquired by the Fleming Collection. Currently, her work is on display at her solo exhibition ‘Janet’ at the Ingleby Gallery, Edinburgh, and as part of the Southbank Centre’s 'Everyday Heroes’, in an outdoor exhibition that celebrates key workers through art and poetry. 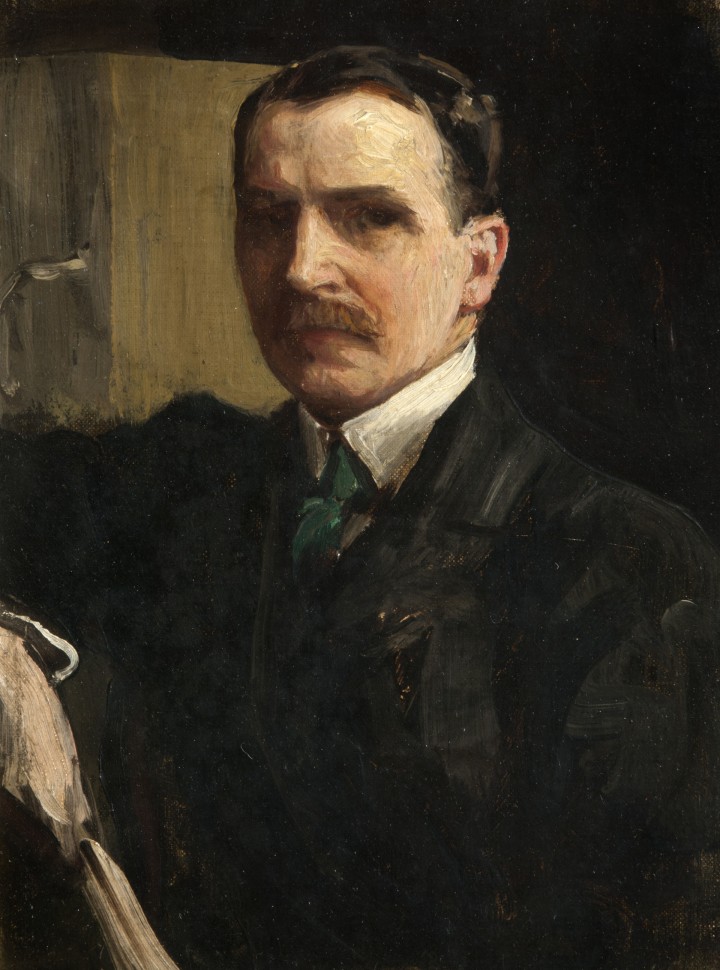 Sir James Guthrie (1859 – 1930) was born in Greenock, a son of the manse. Guthrie was educated at Glasgow’s Academy and University, until dropping out to pursue his calling as an artist. He worked briefly in London with the narrative painter, John Pettie, one of the hugely successful ex-patriate Scots working in the capital, although he learnt more from another of the circle, John Roberston Reid, a painter of rural subjects, which presaged the stark realism of the group known as the Glasgow Boys. Guthrie learnt as much if not more on painting retreats in the country with his close friends, Edward Walton and Joseph Crawhall, which culminated in their arrival in 1883 at the Berwickshire village of Cockburnspath.

Guthrie’s drive and talent established him as the leader of the group of like-minded artists who descended upon Cockburnspath over the next two years transforming it into Scotland’s equivalent of a French artists’ colony. ‘It was here’ wrote James Caw, ‘that for a few summers in the early 80s nearly every cottage had an artist lodger and easels were to be seen pitched in the gardens or in the square, in the fields close by, or near the little harbour in the rocks below the cluster of white cottages at the cove.’

Every aspect of the daily routine of life in Cockburnspath became the subject of scrutiny from the fieldworkers and herders to the children going to school or in the case of Guthrie’s Hind’s Daughter, tending the kailyards. The girl in the painting is the daughter of a skilled farm worker, known as a hind. Her direct stare was inspired by the work of the French Naturalist painter, Jules Bastien-Lepage, who believed that contemporary reality could only be revealed by depicting a dispassionate record of rural life. This was the hallmark of the Glasgow School painters working at Cockburnspath whose singular talents, filtered through the lens of French innovations produced a rich harvest of work which has defined the 19th century Naturalist movement in Scotland  - of which Guthrie’s The Hind’s Daughter is one of the most iconic.