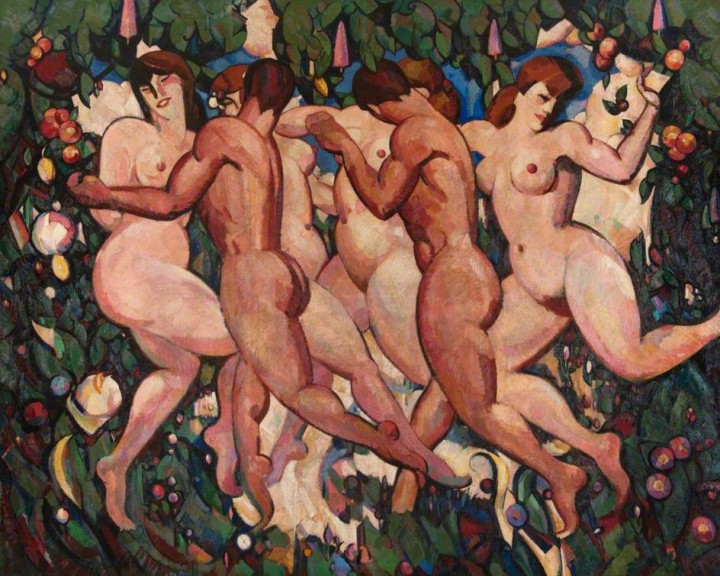 For the first favourite of 2021, the artist and remarkable teacher Sam Ainsley has selected two artworks, one of the past and one of the present, as it was impossible for her to choose just one. This week we take a look at her first choice, by a much-loved Scottish Colourist: Les Eus, 1910, by J D Fergusson. On explaining this choice, Ainsley reminisced to a time some years ago when a popular magazine had asked herself, along with fellow artist and teacher Sandy Moffat, the same question: both replied (unknown to each other) with Les Eus!

"I love Les Eus by J.D. Fergusson, which I first encountered at the National Galleries of Scotland. I was amazed at the sheer eroticism of a painting by a male artist in 1910. He became a beacon for me as I negotiated my new life in Scotland from the north-east of England in 1976. My early works were so influenced by him; Reaping the Whirlwind [now in the Fleming Collection] and Passion, Imagination, Conscience were two screen prints so obviously influenced by him. Then there was the banner I made for ‘The Vigorous Imagination’ exhibition at the Scottish National Gallery of Modern Art." 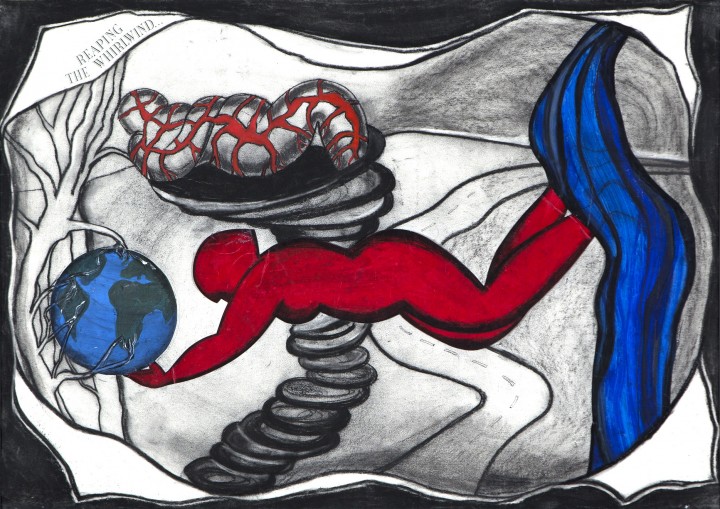 "I adore the beautiful and joyful painting from 1910 because it truly resonated with my own, perhaps wishful, thinking about how things might be between a man and a woman; how much more difficult that could be in 1910 compared to today. I know there are many translations of Les Eus ranging from to have; to possess; to own and Fergusson's own reading as ‘the Healthy.’ I suspect he knew fine well the other readings of Les Eus. His relationship with several women, and especially his relationship with Margaret Morris, meant that dance was a recurring theme in his work, but from my point of view more than a century later I am most entranced that this artist believed women's independence and style was worthy of support long before his male contemporaries were even aware of it. He is one of my heroes." 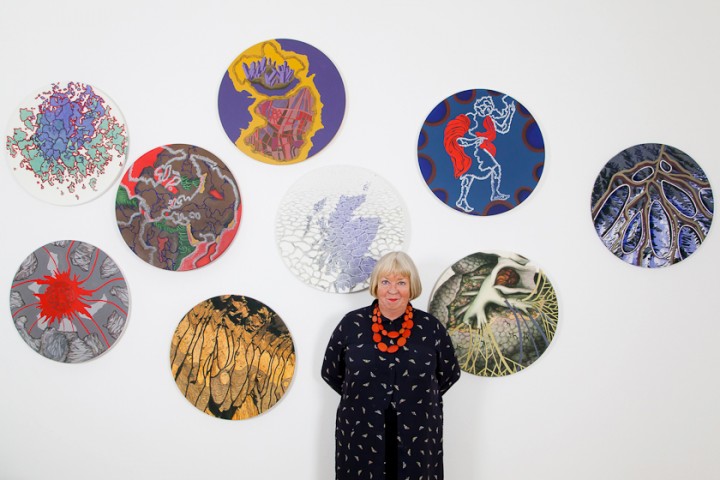 Sam Ainsley (b. 1950) is an artist and teacher and until 2005 was Head of the MFA Programme at Glasgow School of Art. She has forged a remarkable career within the visual arts sector nationally and internationally. From 1985-1991 she taught on the Environmental Art programme under David Harding’s leadership when she then co-founded the Master of Fine Art course. She has since worked collaboratively with David Harding and Sandy Moffat (Ainsley, Harding, Moffat) on symposia and other events and continues to work independently in her studio. She is a respected and published spokeswoman for the visual arts and her own artwork is in a number of public and private collections nationally and internationally.

Ainsley has exhibited in and curated independent exhibitions and undertaken residencies in numerous institutions and arts organisations across the USA, Australasia, Europe and the UK. Recent presentations of her work include a 2017 solo exhibition at An Tobar Gallery on the Isle of Mull (of which more can be read about here) and two exhibitions in Edinburgh and Glasgow to mark the 30th anniversary of ‘The Vigorous Imagination’, a landmark exhibition held at the Scottish National Gallery of Modern Art in 1987. Ainsley was elected to the Royal Scottish Academy and was inducted into the “Outstanding Women of Scotland” by the Saltire Society in 2017. Glasgow School of Art awarded Ainsley an Honorary Doctorate for her contribution to art and art education in 2018. 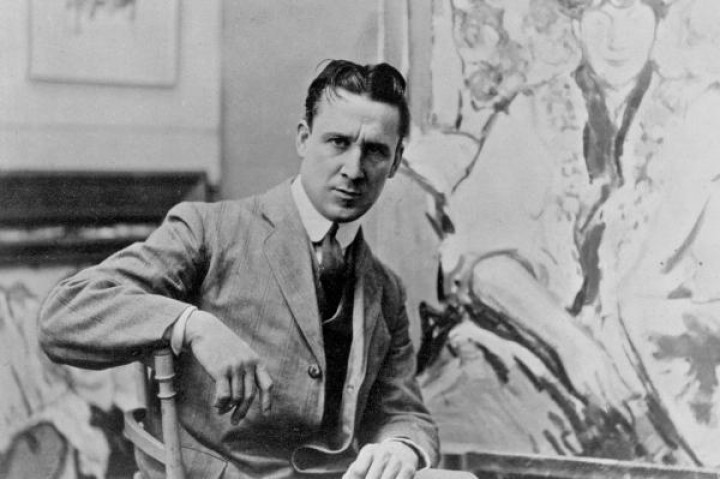 John Duncan Fergusson RBA (1874-1961) was born in Leith to a wine merchant father who underwrote his youthful determination to become an artist, leading to two stints at Paris Académies in the 1890s. On his return to Edinburgh his close friendship with Peploe led to a shared commitment to painting highly accomplished works that echoed the techniques of old masters and French moderns. The two would go on to become key members of the quartet known as the Scottish Colourists.

Fergusson’s full time move to Paris in 1907 plunged him into the social and artistic ferment with its exhibitions of Picasso, Matisse and Braque. Within months he was showing radical new work, influenced by the Fauves, at the progressive Salon d’Automne. In time Fergusson allied himself to a splinter group of the Fauves known as the Rhythmists, becoming founding art editor of its journal. Les Eus is seen as a key work of the Rhythmist movement.

The love of his life was Margaret Morris, one of the most innovative dance choreographers of the early 20th Century, whom he met in Paris before WW1. Having spent much of their time between Lodon and France, Fergusson and Morris settled in Glasgow in 1939, where he was revered as the Grand Old Man of the Scottish avant-garde. Explore works by Fergusson in the Fleming Collection here.