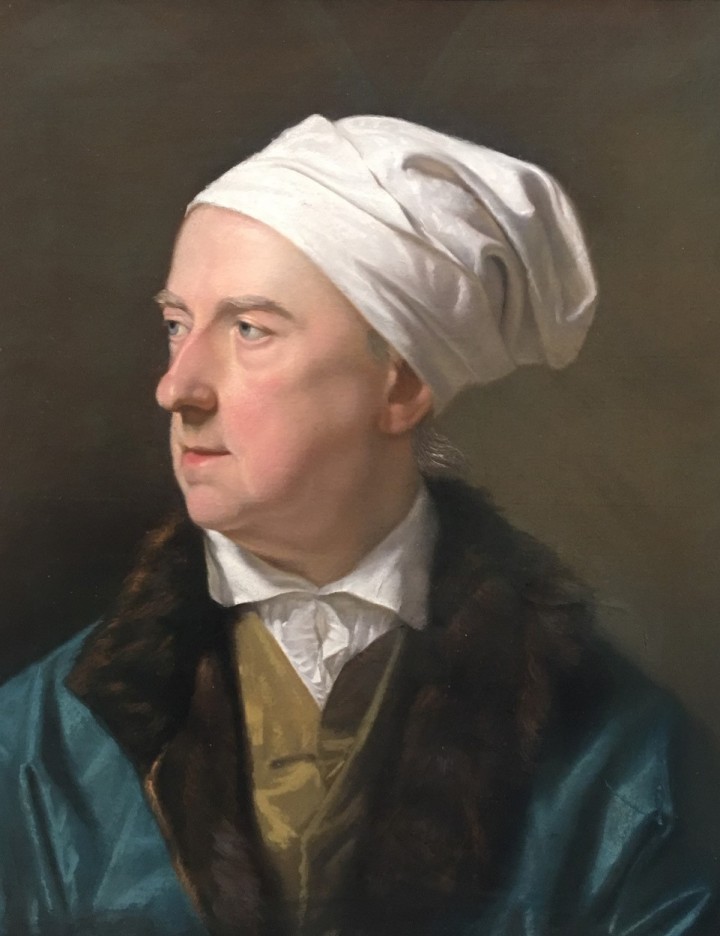 It’s a little like asking someone which is their favorite child. I don’t have one… well, I actually do as I only have the one child… however. My taste is very diverse and a little all over the place. It’s reflective of my life’s experiences where one period shaped and fed another but few would connect as being of any normal path to take.

I’ve chosen a pastel portrait of Gavin Hamilton by Archibald Skirving that hangs in the Scottish National Portrait Gallery. My reason is many-fold. It’s old enough to be of a time considered long past yet still recent enough for me to imagine being part of. The painting could comfortably hang in a stately home or a Chelsea penthouse loft apartment and not seem out of place having the aesthetic gravitas to transcend time and trend. The experience of travel has helped shape the work, painted by a character featuring another. It is quietly flamboyant and rich with beautifully muted tones. It says wealth but is relaxed rather than regal. It is both a costume fit to stroll the piazzas of Rome or the Milanese catwalks of today.

Within the portrait I find many other attractions, one of which is from a school at the time still long unknown, the celebration of abstraction. My eye is drawn to the folds in his turban and velvet cloth, the beautiful flaws in an upturned collar, a delicate skin tone reminiscent of the finest porcelain or marble. All contradictory of ego and perfection by celebrating the not quite ‘perfect’ nose (I most definitely can relate to the nose thing!). This pastel is more than a resemblance of another… it’s a journey for exploration and adventure in itself but one that offers intrigue rather than suggestion.

Void of eye contact, this painting immediately captivated me many years ago. What we leave out of a frame can be as important as what we include and all these years later I still wish to know what Hamilton was looking at…what has been left out. Likewise, in anticipation, I look hoping he’ll turn his gaze for a moment towards me and offer a fond smile, from one stranger to another. A sitter and artist with no comprehension of a world yet to exist, yet both helping shape the world and vision of another.

David Eustace (b. 1961) is an internationally renowned photographer, director and curator. He was born in Edinburgh but raised in the East End of Glasgow and began his working career in the Royal Navy and as a prison officer at Barlinnie, Glasgow. Eustace didn't pick up a camera until his late 20s, and proving himself to have a creative eye, he changed career paths and retrained as a photographer at Edinburgh Napier University. After graduating, Eustace moved to London where he began photographing for fashion magazines such as Vogue, GQ and Tatler, as well as a number of international advertising clients.

Eustace's international career took him to New York in 2001, where he was based for 15 years, working and collaborating with fellow creative greats. Thanks to his fashion photography, portraiture became Eustace's specialty and his list of sitters includes John Byrne, Judi Dench, Tracey Emin and Sir Paul McCartney. He was appointed Chancellor of Edinburgh Napier University in October 2015 instigating a move back to Edinburgh, where his work has since been exhibited in solo shows at the Scottish Gallery. His photography is in the collections of The Scottish National Portrait Gallery and The National Portrait Gallery in London.

Archibald Skirving (1749 - 1819) was born near Haddington in East Lothian. He began work as a junior clerk at the Customs Office in Edinburgh but it is thought that he attended the Trustee's Acadmey at the same time, working on his art at night. By the age of 28, Skirving moved to London to make a career out of his art, finding some success before journeying further afield to Rome for additonal study, where he met and painted the older, more established artist, Gavin Hamilton.

During his stay in Italy, Skirving initially produced copies of old master paintings as well as portrait miniatures but realised that there was a potential market for him in producing pastel portraits. Skirving’s painstaking attention to detail resulted in meticulous works in pastel, as can be seen in one of his best known drawings, a portrait of Robert Burns. However, the time spent on his portraits meant that Skirving output was limited, so that, despite his notable portrait sitters, his career did not flourish.