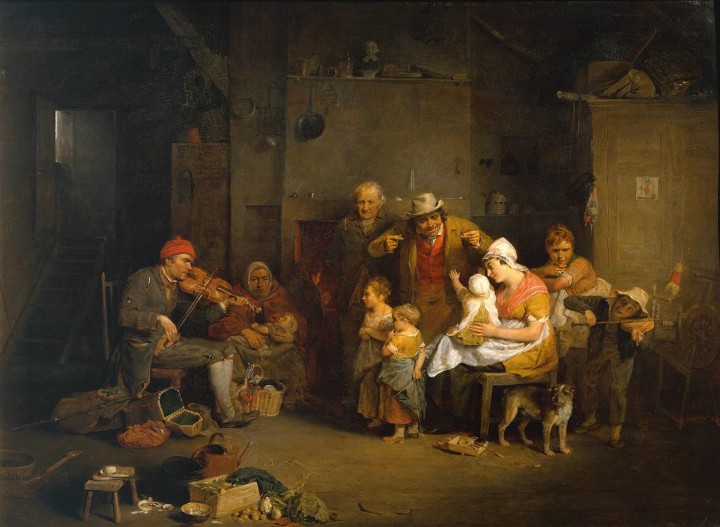 David Wilkie had a grand historical imagination, but he wasn’t a history painter in the sense of being an artist capturing the world’s big events on canvas. What he did, instead, was to envisage historical events as they played into the lives of ordinary people, and then – in what for me is his greatest mode – to make the passing business of small-town life itself into a singular species of historical evidence. The people in his paintings are fully connected to their time but also fully occupied by a self – each discrete character has her own look and his own traits, as well as the suggestion of a backstory, a nature.

I love Wilkie’s colours and his tone. Three of his masterpieces hang in a row at the National Gallery of Scotland – Pitlessie Fair (1804), The Letter of Introduction (1813), and Distraining for Rent (1815), each demonstrating a flair, on Wilkie’s part, for human stuff that not only shows the lessons of the Flemish masters but in some subtle way, in my view, pushes beyond them. At Apsley House, one can see the resources Wilkie had at his command – lighting up a panoply of faces and minds with sudden news – in Chelsea Pensioners Reading the Gazette of the Battle of Waterloo (1822), and it must stand as Wilkie’s most famous. But my job is to choose one painting and my deep affection, nay amazement, nay longing, is reserved for the painting of Wilkie’s that I would name my favourite. 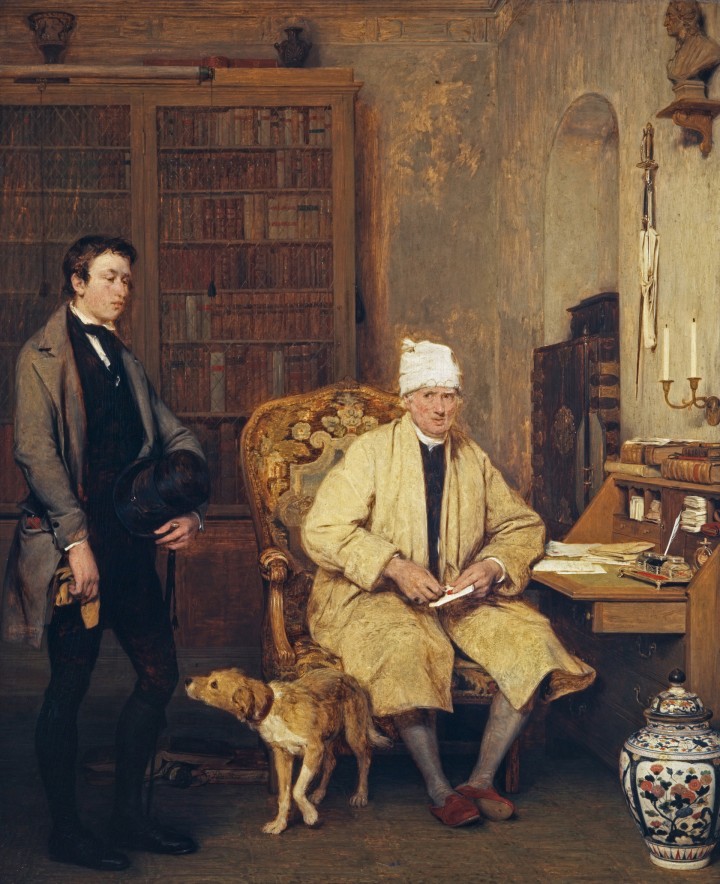 It’s an early one, The Blind Fiddler (1806). When you look at it today, at Tate Britain, you see a painting of moderate size, fairly novel in colours, but a work in which the most minute manner of observation is married to a heightened sense of human being. The light comes from a window on the left (as in the Dutch), but it is very much a domestic interior of the Scottish sort, money and security scarce, piety embodied in the bust of the minister above the fireplace, inmates more or less distracted, with only a few of the children really listening to the music being played. Noticeably, not one of the people in the picture is generic: to a man and a child they are stamped with their own DNA. (The boy on the extreme right, with red hair, is perhaps stamped with a little of Wilkie’s own. See the artist’s self-portrait in the Scottish National Portrait Gallery for the resemblance.)

Out of the shadows of these lives, out of the realities that explain them and constrain them, we find a ruddiness of cheek, a wholesomeness of eye, a passing intensity of drama, an openness of human nature, a sense of aliveness anything but accidental. The painting is special to me because it appears to stop time with a resounding sense of actual human presence. It is a masterpiece, what is more, that might not have been produced, in exactly this particular way, by any artist from any other country at the time, for Wilkie mixed a Scottish Enlightenment with his vivid paints, and gives enlargement to a notion of humanity truly free and deep. Joshua Reynolds once castigated ‘genre paintings’ of common life, those featuring not ‘classical scenes’ but the faces of people with ‘vulgar minds’. Well, so much for the democratic spirit! Gladly, we can look to the work of David Wilkie and enjoy what to my mind is a riposte of genius. 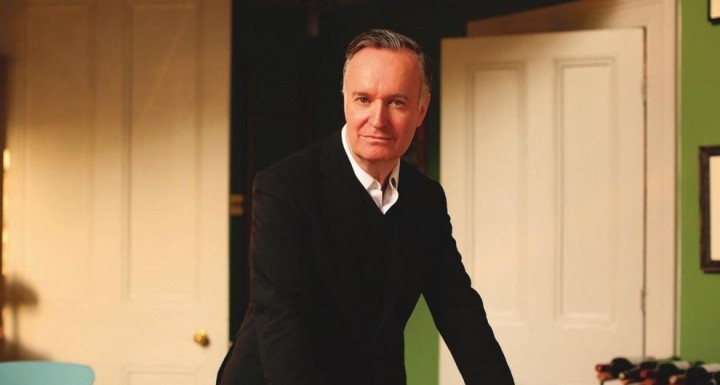 Andrew O'Hagan (b. 1968) was born in Glasgow, of Irish Catholic descent, and grew up in North Ayrshire. Having studied at the University of Strathclyde, O'Hagan joined the staff of the London Review of Books, working there for four years. In 1995 he published his first book, The Missing, a work of non-fiction exploring lives of British missing persons. Four years later his debut novel was released.

Our Fathers (1999) tells of three generations of a family in south-west Scotland, exploring religion, politics and nationality. The book was nominated for numerous prizes, including the Booker Prize, the Whitbread First Novel Award and the Winifred Holtby Prize for Fiction (which it won). O'Hagan has since gone on to be nominated for the Booker Prize a further two times, for Be Near Me in 2006 and Illuminations: A Novel in 2015. In September this year, O'Hagan published his sixth novel Mayflies, with Faber & Faber, a coming-of-age tale and exploration of a life-long friendship, friendship, described by Carol Ann Duffy as 'wise, poetic, alert to time, place and the ordinary human. I adored this book.' 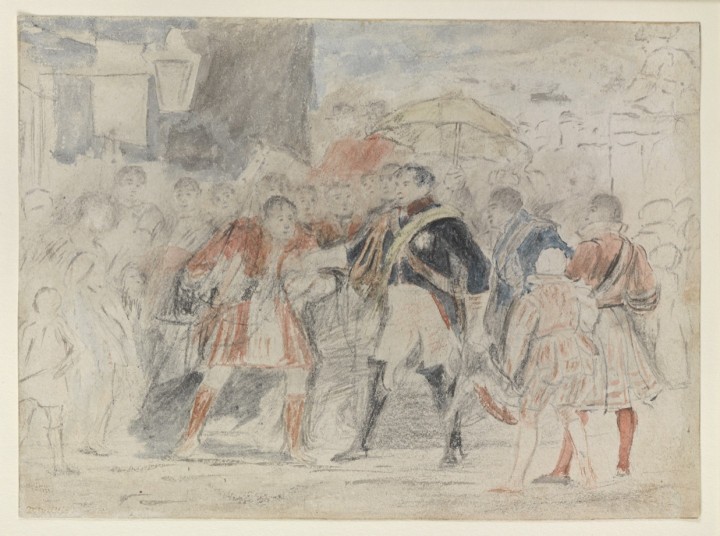 Sir David Wilkie RA (1785-1841) was born in Fife, the third son of the parish minister, and enrolled in art classes at the Trustee's Academy in Edinburgh when he was fourteen. In 1805 he moved to London, studying at the Royal Academy Schools. The following year he exhibited The Village Politicians at The Royal Academy and became an overnight success. Thereafter his rise to fame was meteoric. When his masterpiece Chelsea Pensioners (celebrating Wellington's victory at Waterloo) was exhibited at the academy in 1822 at the astonishing price of 1200 guineas [£1260], there was such a clamour to view the painting that a crush barrier had to be erected to protect it, a previously unheard of measure.

Wilkie stands as one of the greatest British painters of the early 19th century; indeed, in his own lifetime his reputation - nationally and internationally - was as high as or higher than that of Contable and Turner. Wilkie was a pre-eminent genre painter with an exceptional gift for observation of character, his early work being in the Dutch manner. Subsequently he turned to historical genre and, later, to portraiture. His work attracted great popularity, particularly thanks to the accessible medium of engravings. See other works by Wilkie in the Fleming Collection here.