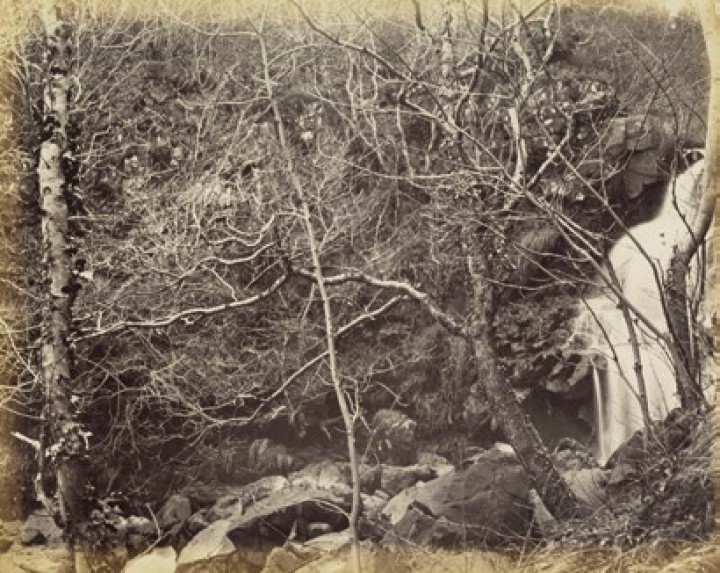 Horatio Ross (1801–1886), Woodland Scene, c.1860s. The MacKinnon Collection. The National Galleries of Scotland and the National Library of Scotland.

The collection reveals a century of dramatic transformation, innovation and upheaval in Scotland and worldwide, covering the lives of Scots from humorous social interactions to horrific wartime confrontations. Scotland’s social history during this time is also inseparable from its leading role in the early development of photography itself. Many of the first practitioners and visionaries who propelled the medium forward and established international precedents were based in Scotland or were inspired by Scottish subjects.

Starting in November, a pair of exhibitions in Edinburgh introduced the MacKinnon Collection to a wider public: 'Scotland’s Photograph Album: The MacKinnon Collection' at the Scottish National Portrait Gallery and 'At the Water’s Edge: Photographs from the MacKinnon Collection' hosted by the National Library of Scotland, both running until February 2020 [the SNPG exhibition has now been extended through till April 2020]. A selection of photographs from the collection will then tour to three venues across Scotland in 2020–21. The collection’s greatest impact, however, will be over a much more extended duration. Itemised cataloguing and digitisation have begun with the goal of making the entire collection accessible online during 2021. As various forms of public engagement are deployed by NGS and the NLS, the meaning, context, and relevance of the MacKinnon Collection’s content will be continually renewed through public interaction and response. 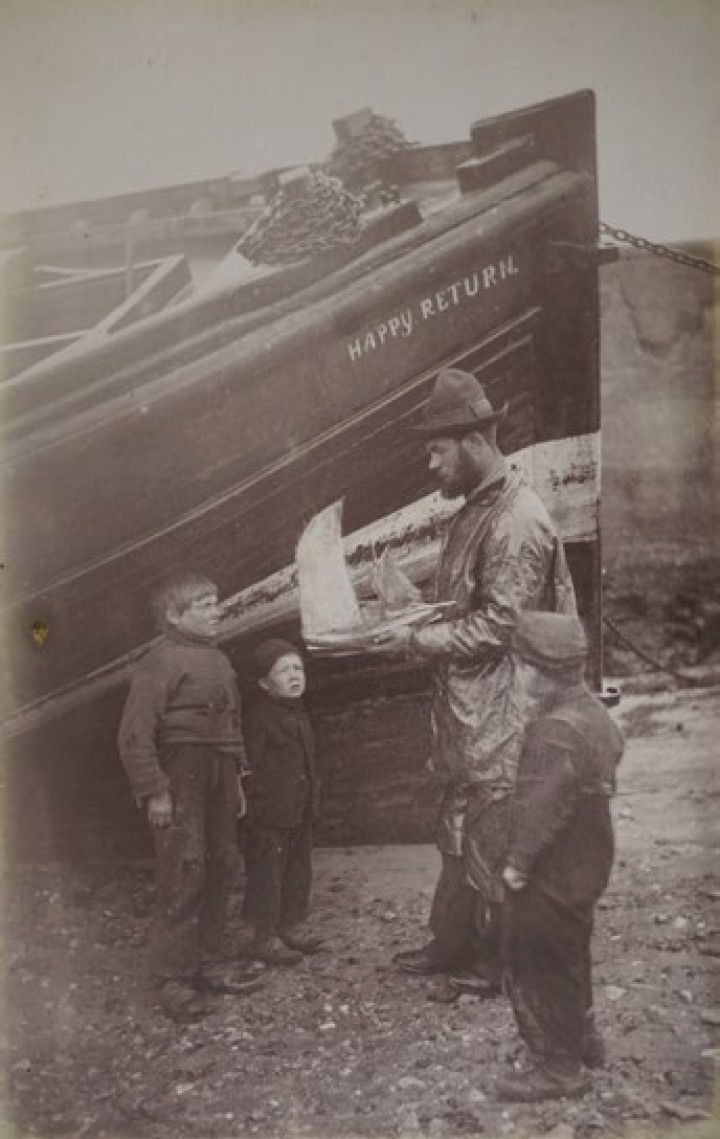 Unknown maker, A Lesson in Navigation (from the album, ‘Fishing in Cockenzie’), c.1880s. The MacKinnon Collection. The National Galleries of Scotland and the National Library of Scotland.

Unknown maker, A Lesson in Navigation (from the album, ‘Fishing in Cockenzie’), c.1880s, albumen print

“What’s striking to me about this photograph is both the familiarity and remoteness of the scene that’s captured. A young man is showing a model boat to a group of three young boys. Has he taken time out of his day to spend some quality time with them? Is one or more of them his son(s) or has the photographer gathered the group to pose specifically for him in the shadow of the ‘Happy Return’? We don’t know but what we can gather is that while these boys are not privileged in their ragged clothes and dirt-streaked faces, they are part of a community, playing and possibly working under the very shadow of boats and fishermen. It speaks of a time when children had to toil alongside adults to earn a living yet possibly there were rare moments like this one where children were allowed a chance just to be children – to play, to imagine, to wonder.” Alice Heywood, Learning Officer (Digital), National Library of Scotland 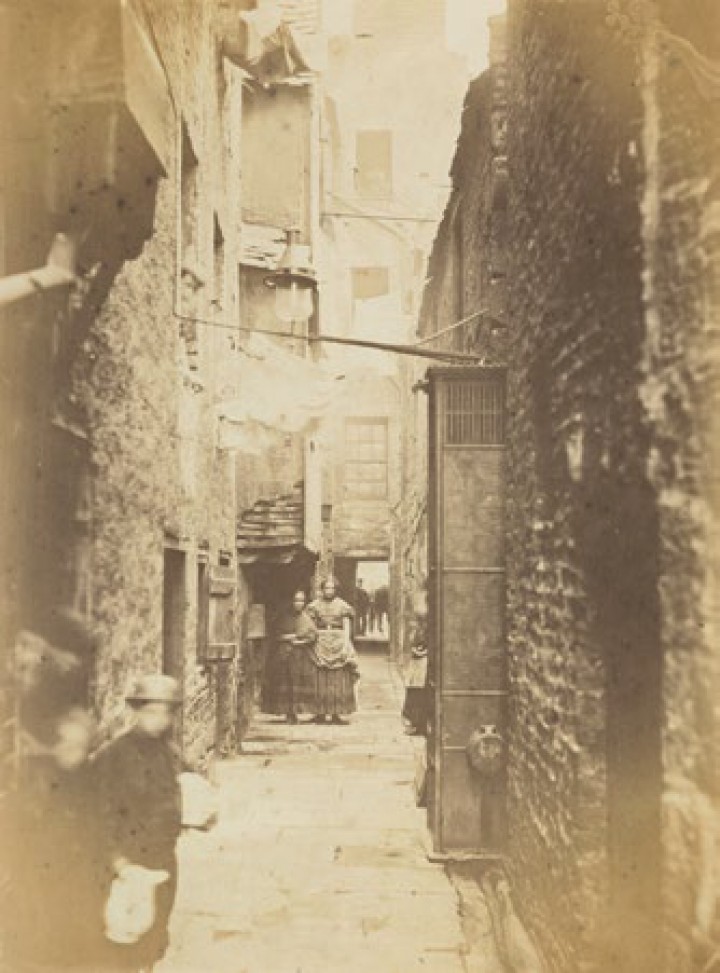 Thomas Annan (1829–87), Close No. 37, High Street, 1868–71. The MacKinnon Collection. The National Galleries of Scotland and the National Library of Scotland.

“Thomas Annan began documenting the narrow closes and wynds of Glasgow’s East End in 1868. Over the course of the next few years, he succeeded in the difficult task of making photographs in these cramped spaces, where only a small amount of daylight made its way into the lanes. It is likely that Annan was working with the city architect, John Carrick, to record the buildings before they were torn down as part of the City Improvement Act (1866). Despite the slum-like conditions, the residents were encouraged to maintain hygiene standards, as visible in this view, ‘Close No. 37 High Street’, where Annan captured the laundry hung like bunting between the buildings. Although anonymous, people populate Annan’s pictures: the ghost-like figures of children whose movement creates blurriness, the stoic presence of the women and the dark silhouettes of the men, are all reminders to the viewer that these slums are in fact home to many. Annan’s photographs were published in The Old Closes and Streets of Glasgow (1878–79) first as carbon prints, and then later as photogravures in the 1900 edition of the album. The MacKinnon Collection holds all three versions, allowing a greater understanding of Annan and his social documentary legacy.” Anne Lyden, Chief Curator, Photography, National Galleries of Scotland

"Unlike most other photographs made in the mid-19th century, Ross’s woodland scene lacks a central subject in favour of a composition evenly dispersed edge to edge. While many photographers would have emphasised the waterfall, Ross has resigned it to the periphery. This unusual choice presents an image upon which our 21st-century perceptions might assign creative ambiguity, even mystery. The photograph’s original context may provide clues to Ross’s intent. This image was not necessarily printed for public consumption; it is from an album Ross made for his wife, Miss Macrae of Inverinate. Perhaps this scene was familiar to her, or carried meaning shared only between themselves; either way, this brilliant image seems to have come from a deeply personal place."  Blake Milteer, Curator, Photography (The MacKinnon Collection), National Galleries of Scotland 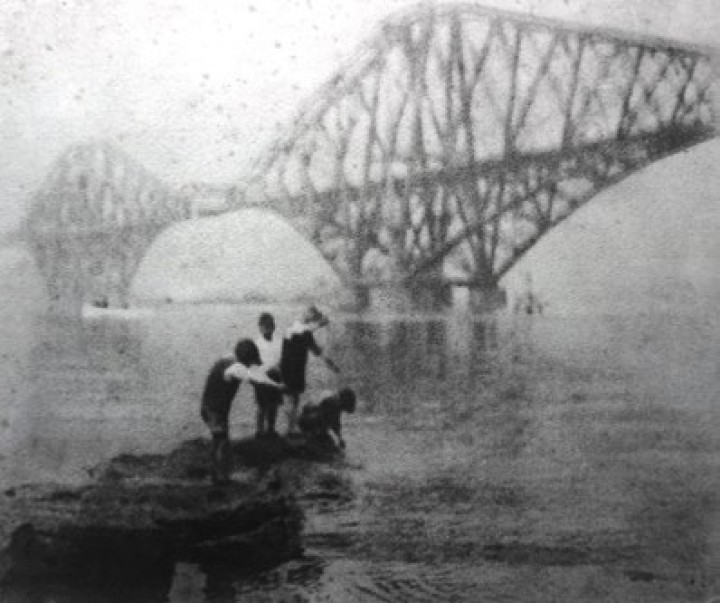 Alexander Wilson Hill (1867–1949), The Bridge, Summer, c.1920s. The MacKinnon Collection. The National Galleries of Scotland and the National Library of Scotland.

“A favourite image of mine is the Alexander Wilson Hill photograph of the children playing on the shoreline below the Forth Rail Bridge. Hill’s day job was a bank manager but he was a keen amateur photographer who specialised in the bromoil transfer process, whereby the silver image, contained in an original black and white print, was replaced by an ink image by way of several chemical processes. The end result is a grainy, blurred print which seems like a halfway point between a painting and a photograph. The dreamlike quality of the bromoil prints made them very popular with the pictorialist movement of the early 20th century. Hill continued to make them even when they fell out of fashion. At his best, his images are very cleverly composed, such as this one where the small figures in the foreground are juxtaposed with the giant, looming and iconic structure of the bridge, which appears to be shrouded in mist.” Dr Graham Hogg, Curator (19th-Century Printed Collections and Photographs), National Library of Scotland

Scotland’s Photograph Album: The MacKinnon Collection will now run at the Scottish National Portrait Gallery until Monday 13 April, extending well beyond its original end date of 16 February. Admission for visitors remains free throughout.

(This article was originally published in Scottish Art News, issue 32, autumn 2019; some edits have now been made.)