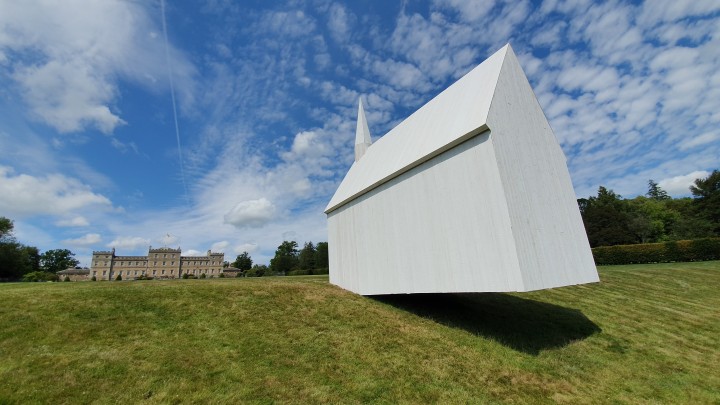 The Summer Party on 31st August at the Borders Sculpture Park, Mellerstain House, promises to be a thrilling spectacle, with a theme of levitation taking centre stage around The House of the Indifferent Fanatic by Henry Krokatsis. This third commission for the Borders Sculpture Park continues to explore the possibilities of site-specific, historically reflective contemporary artwork. Krokatsis has created a gravity defying, chapel-like structure, seemingly suspended in mid-air by opposing forces. The house is at once levitating serenely and balancing perilously, at a point where the weight and certainty of the past meets the expansive, unknowable future. At the Summer Party, kite flyers from around the UK will congregate around the work, alongside musicians and storytellers to raise the mind and spirits. The celebrations continue on 28 September when the Borders Sculpture Park hosts their Illuminated Evening under the full moon.

Krokatsis' work draws inspiration from Johann Conrad Dippel, a controversial 18th century German alchemist who attempted to dissolve the church and rejected the bible as the true word of God. He was accused of being 'ein indifferentistischer schwarmer', an indifferent fanatic, and interestingly, also created the popular colour Prussian Blue. Of the work, Krokatsis has said, 'House of the Indifferent Fanatic prises open a subtle gap in what we expect of a traditional setting like this, a place heavy, almost burdened, with gravity, history and legacy.' 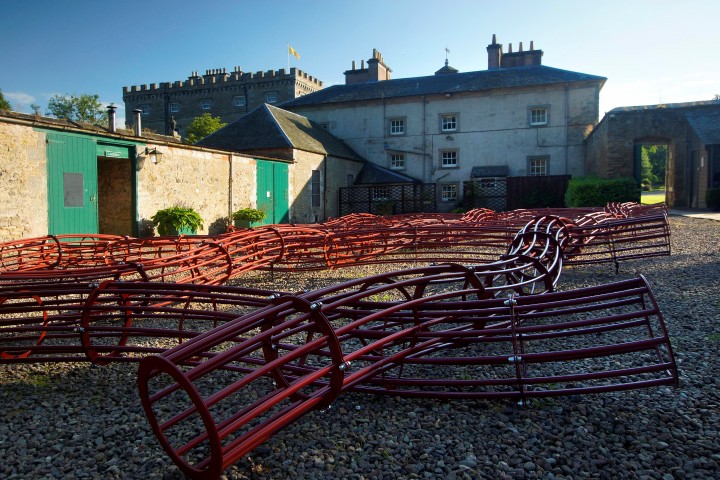 Curated by Sarah Coulson of Yorkshire Sculpture Park, the summer exhibition, open until 30th September also features The Blanket by David Murphy. Originally commissioned for the Piece Hall, Halifax, the sculpture is a large-scale meditation on the properties of matter suggesting the warp and weft of a textile weave, rendered in unyielding metal. In Murphy's hands hard steel becomes like soft fabric, its gently interwoven surface transforming the courtyard space and offering opportunities to sit and reflect.

George, Earl of Haddington, Mellerstain House, comments, 'This year, I feel that we have created something reverent, enlightening and otherworldly. I hope that all who see and experience the art on show, will leave with lightness in their hearts. The historic setting serves to accentuate and strangely compliment the qualities of contemporary sculpture. It is a tremendous privilege to exhibit work by both of these artists.'

For more information on Mellerstain House and the Borders Sculpture Park, click here.