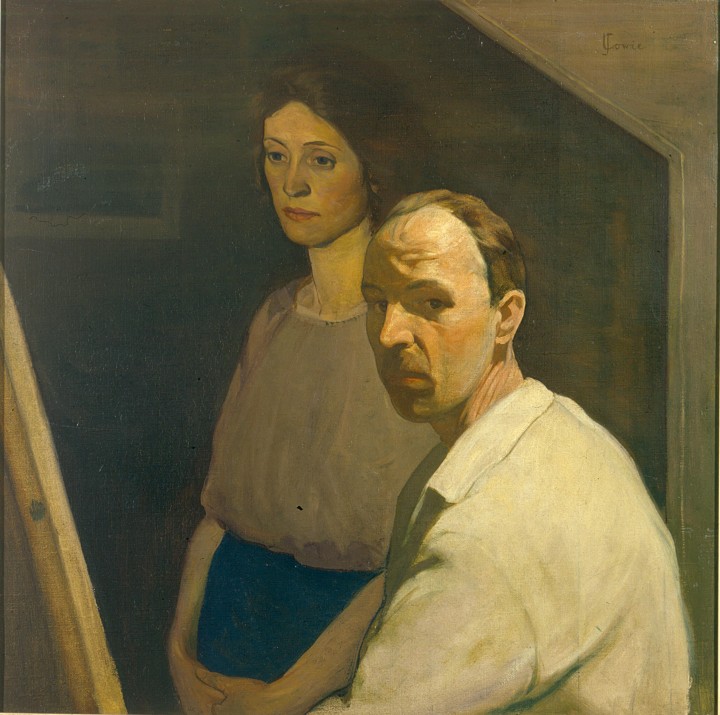 James Cowie was born the son of a farmer near the small hamlet of Cumniestown in Aberdeenshire. After setting out to study English Literature at Aberdeen University, he turned to painting at the relatively late age of twenty six. Whilst studying, he attended teacher training college, and it was during this time that his interest in the visual arts grew - encouraged by James Hector, an art teacher whom he met there. Against the wishes of his parents, he abandoned his studies at university to pursue a career in painting and after completion of his teacher training course and a short time working as art master at Fraserburgh Academy in 1909 to amass funds, Cowie enrolled in a two-year course at The Glasgow School of Art in 1912. There he studied under the direction of Maurice Greiffenhagen, an influential illustrator and portrait painter in the traditional style. Cowie's career was interrupted by the onset of war, during which he stood as a conscientious objector. For a time he worked for the Pioneer Corps just outside Edinburgh, but in 1918 he found employment at Bellshill Academy where he remained teaching art until 1935.

It was during his time at Bellshill Academy that Cowie's unique style and outlook really began to develop. He made the most of his time there by honing his artistic skills and using his students as models for some of his most ambitious pieces such as Summer is Icumen In (1925-6) and Falling Leaves (1934). He maintained close contact with other artists of the Glasgow circle, particularly Grieffenhagen and Frederick Cayley Robinson, whose style - a mixture of classical formality and pre-Raphaelite romanticism - had great influence on the younger artist. Cowie's prior education in literature and poetry also served to enrich his art.

For a brief time in 1919, Cowie and fellow Glasgow School of Art students Robert Sivell and Arthur Mcglashan for The Glasgow Society of Painters and Sculptors, a group of artists who appreciated traditional styles and methods of representational art. It was Cowie's originality, however, which led him to become the most renowned of the three artists. It was not until 1935 that he achieved his first solo exhibition at The Maclellan Gallery - the same year in which he was appointed Head of Painting at the prestigious Gray's School of Art in Aberdeen.

Cowie's adherence to traditional values, combined with the originality of his ideas set him apart from his Scottish contemporaries. While other artists of the inter-war period such as the Colourists were working in a very fresh, painterly style, he maintained a deep reverence for the meticulous draftsmanship and rigorous execution of the Old Masters. In contrast to the vibrant colours of Peploe (1871-1935) and Fergusson (1874-1971), Cowie worked in a strongly linear style using a characteristically muted palette. He was therefore seen by many to be backward-looking, and his paintings 'over worked' or 'tired', but this assessment of him fails to acknowledge that he went on to become one of the only Scottish painters to seriously embrace the modern style of Surrealism.

'Cowie believed art was the product of thought [and] that every mark on the canvas was there for a reason.' His work gradually became more linear and severe as his individual style developed and any looser painterly qualities that had been present in the early years soon disappeared.

Self-portrait with the Artists's Wife of 1923 is an example of one of his earlier works, which demonstrates that his style was still in the development stages. Cowie depicts himself, in shadow, seated in front of a dream-like vision of his first wife, Nancy Buchanan whom he had met at the Glasgow School of Art and subsequently married in 1918. The softness of this painting with its graduating tones contrasts with the hard edges of his later works such as Portrait Group, 1932-c. 1940. However, at the same time, the painting also demonstrates a progression towards his later, more linear style. Compared to an earlier portrait of his wife of 1919, there are a number of marked advances. While there is a gaiety to the earlier portrait - a looser handling and use of a lighter palette - the 1923 portrait has a darker psychological intensity. In the former, painted a year after their marriage, Nancy looks carefree and untroubled, whereas in the latter her eyes are down-cast and her expression serious. This is unexpected given that the painting also reveals that she is pregnant with the couple's first child. Where one might expect to find a feeling of hope, there is a surprisingly melancholy ambience. Not long after this portrait was painted and just ten months after the birth of their child, Nancy died of tuberculosis. Did Cowie knowingly incorporate a suggestion of his wife's illness into the painting before he completed it?

Another noticeable difference between these two portraits of Cowie's first wife is their composition. His work becomes more structured as his style develops and we can see that he has begin to make use of architectural elements and objects such as easels and canvases to frame his compositions. There is a definite geometric arrangement to the later portrait with the overhang of shadow to the top right adding to the psychological effect of negativity, which was not present in the earlier piece. As with many of Cowie's later paintings, the composition gives a sense of being made up of difference planes, something which abounds in his surrealist planes, something which abounds in his surrealist works like Composition of 1947, and points at his interest in exploring the complexity of the mind even at this relatively early stage. In his large pieces Cowie assembled his compositions from separate preliminary studies. Perhaps this is why there appears to eb so little connection between the two figures in the portrait. it could almost be that a painting of his wife is positioned behind him.

Another painting which demonstrates Cowie's use of sliding planes is a much later self-portrait entitled Self-Portrait (The Blue Shirt), c. 1945-50 )The University of Edinburgh_, which was painted approximately a quarter of a century later. Comparing these two works affords a telling insight into the direction of his style in his later years. Self-Portrait (The Blue Shirt) is much more complex than the 1923 self-portrait, incorporating a whole host of influences, most noticeably Poussin, whose painting The Inspiration of the Epic Poem, 1629-30, is positioned just behind Cowie's head. This painting confirms Cowie as an artist who could successfully combine traditional and modern influences in equal measure.

Two years after Nancy’s death nothing of much significance seems to have been produced by Cowie who 'isolated himself in his studio'. But after remarrying in 1926, not only did he begin to paint more prolifically, he also dramatically reformed his style, developing a use of line that was unique in its intensity. His paintings took on a more formal appearance and became deeply introspective.

Cowie became the renowned teacher as a whole generation of post-Second World War artists including Robert Colquhoun, Robert MacBryde and Joan Eardley, whose paintings of Glasgow children demonstrate a reaction against the teacher’s tightly bound style.