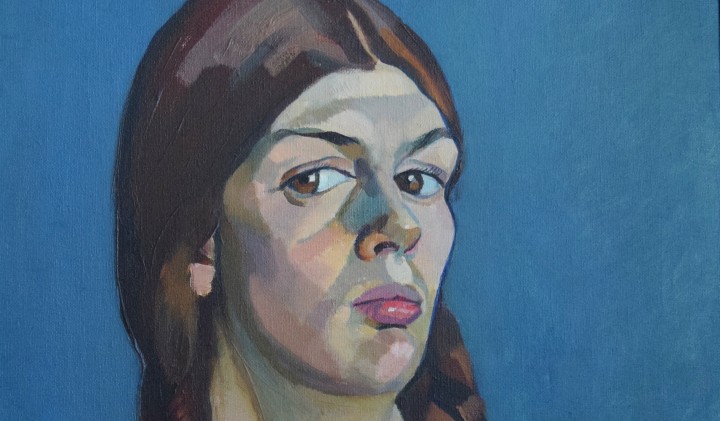 The Scottish artist Beatrice M.L. Huntington (1889-1988) is best known for her portraiture. Two examples recently acquired by the Fleming Collection, highlight her versatility as an artist. Throughout her long and fascinating life, which spanned a century and bore witness to the advent of the Modern era, she remained indefatigably committed to her development as an artist and to ‘containing and realising the big-ness of it all’ as she herself described it in a letter to a friend in 1977, when at the age of 88 she was still refining her approach to form and colour.

The daughter of an eminent St Andrews doctor, Beatrice grew up in affluent middle-class surroundings. Her childhood home was an imposing town house on St Andrews South Street. At Madras College she excelled at music and art, leading her, unusually for a seventeen-year old girl at that time, to pursue her studies abroad. In 1906 she went to Paris to study drawing and painting and after that to Munich, attending a private art school where she apparently flourished.

Beatrice’s marriage to the painter William Macdonald (1883-1960) in 1925 cemented her place within the Scottish art scene of the 1920s and 30s, particularly in Edinburgh where Macdonald was already well established and was a close friend of Scottish Colourists F.C.B. Cadell and Samuel Peploe. But by then her own identity and path as an artist were clearly defined.

Macdonald’s particular affinity for the arid landscapes of Southern Spain had earned him the sobriquet William ‘Spanish’ Macdonald. Beatrice shared his love of travel and together they explored the Continent, returning frequently to the French Riviera and to Southern Spain. They moved in an artistic milieu both at home and abroad, spending time with Samuel Peploe and family in Cassis and with Jessie M. King and E.A. Taylor in Kirkcudbright. 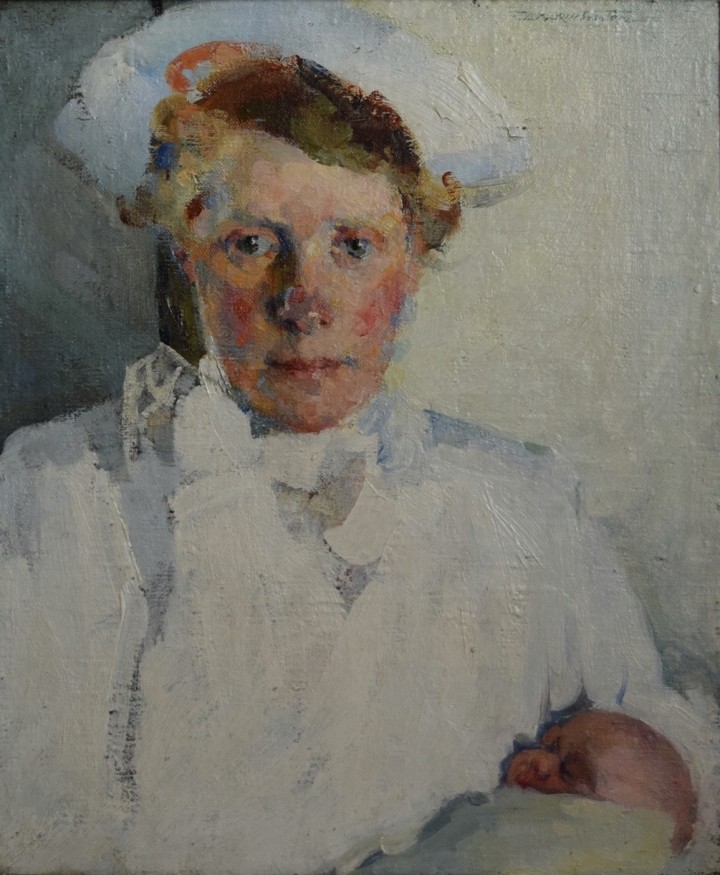 The couple settled in Edinburgh in 1928, their gracious New Town flat in Hanover Street remaining Beatrice’s home for the next sixty years and, until recently, housing a collection of paintings by both artists as well as works by their friends and contemporaries.

The first of the new acquisitions, Beatrice Huntington’s Nurse and Baby, is a painting with which she achieved some critical acclaim. Whilst is was selected for inclusion in the Royal Scottish Academy Annual Exhibition of 1939, preparatory drawings, recently discovered in a portfolio of much earlier sketches, would seem to date this painting to around 1915, when Beatrice was living and working independently in London. Certainly, it is consistent with the impressionistic style with which she approached a portrait of her mother in that year and exhibited at the Grosvenor Gallery in 1916. Common to both portraits too is the empathy and insightfulness with which she approaches her subjects.

In Nurse and Baby, the vulnerability of her sitters is somehow emphasised by a delicate use of warm tones in an otherwise restricted palette, concentrating our attention upon the intense gaze of the nurse and just-seen head of the baby she cradles. Against the monochrome treatment of her uniform, of the baby’s blanket and surrounding room, their humanity is thrown into relief.

In 1948, nearly a decade after it was shown at the RSA, Nurse and Baby was included in the 180th Royal Academy Annual Exhibition in London, from where it was selected for a subsequent exhibition which toured to provincial galleries. With the founding of the NHS that year, the subject matter of Nurse and Baby was certainly topical and it is not impossible that such a seismic event might have prompted her to revisit the painting. 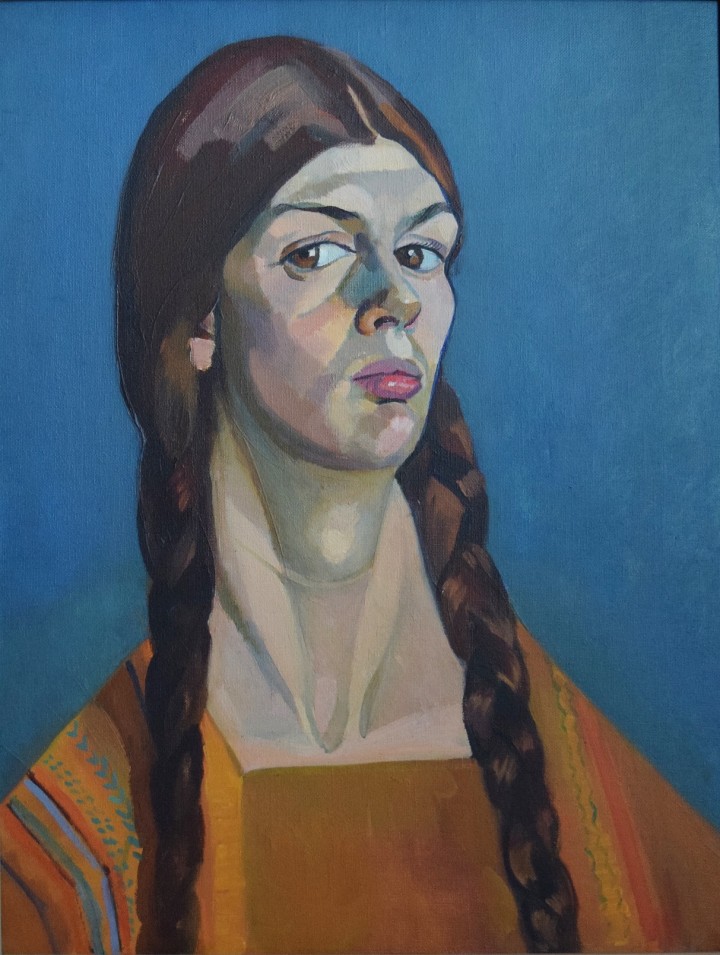 The second portrait, The Cellist, dates from the 1920s, a decade which saw Beatrice’s most intense period of experimentation after her formative periods of study and independent work in Paris, Munich and London. In a move away from the impressionistic approach that she favoured in the previous decade towards starker stylisation and austerity of design apparently informed by her understanding of Cubism, The Cellist exemplifies Beatrice’s brief but successful engagement with Modernist art.

In the picture, the slope of the cellist’s shoulders has been exaggerated to form a simplified triangular silhouette, whilst the angular treatment of her elongated neck is accentuated by a framework of strong vertical planes. The juxtaposition of complementary colours, orange against blue, is not accidental but another uncompromising detail which supports the sitter’s confrontational gaze.

The sitter has recently been identified as the professional Scottish cellist, Isobel Forrest Neillands, who trained in Vienna under Friedrich Buxbaum of the Vienna Philharmonic. She performed regular cello recitals - particularly in Edinburgh, Fife and Angus - alongside her husband, the pianist George Forrest Neillands.

The choice of subject chimes with Beatrice’s own experience as she was herself an accomplished cellist, performing at events in St Andrews in her youth and studying for a time in the summer of 1924 in Leipzig under the tutelage of celebrated cellist, Julius Klengel. 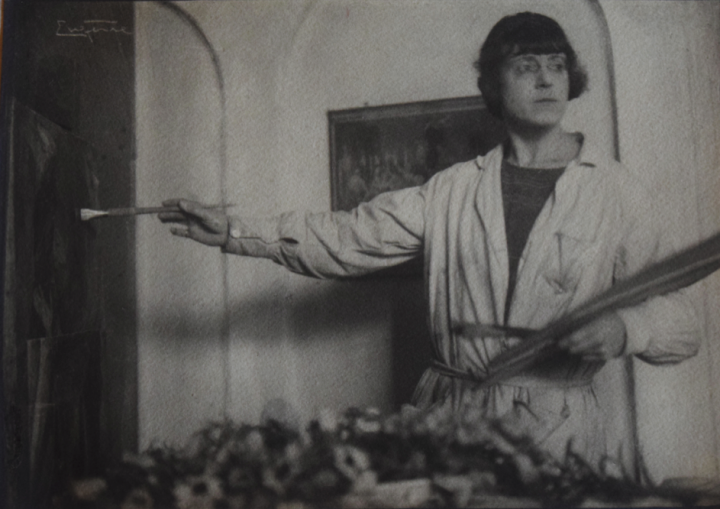