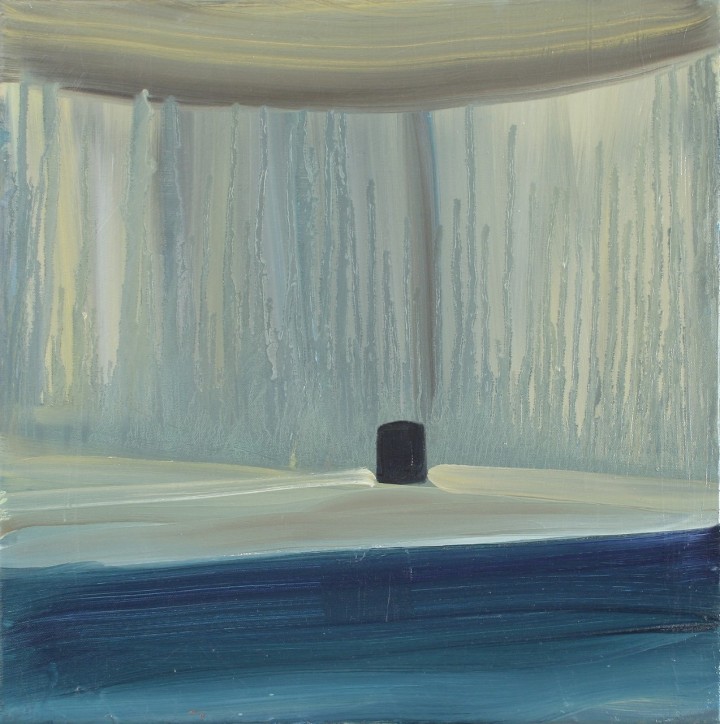 Anne Devine created a collection of paintings entitled The Greenness of Sea in 2004 after her first visit to America and following an artists' residency on the island of Mull. She took daily boat trips to various islands and created a series of dark or light landscapes to reflect the idea of an inner landscape existing within nature and the human spirit.

Devine's work can sometimes be figurative but more and more she has been drawn to the abstraction of form and the synthesis of shape and colour within composition. She has claimed to be influenced by the structure of music and movement in sound as it touches the deepest part of our spirits, inspiring a parallel colour and shape in her paintings.

The Boatman’s Cave, Staffa is from this collection. It’s the quality of light and shade in this that I find so affecting, but at the heart of it is the dark hole - a cave, or is it a tomb? Who or what could emerge from this cavern? A sea creature? Lazarus? Or Christ Himself? The spiritual tradition of the Cross and Resurrection is a subliminal presence in Devine’s work.

Another painting from this collection is Staffa, which is darker and more imposing in an unnerving way. It seems to be night time, although there is moonlight on the waters below. But the island itself is now sepulchral, and above, along with the moon and stars there is the faintest hint of a figure. Who is it? Fingal? Felix Mendelssohn has “painted” this place before in music, and Devine’s citation of a musical analogy seems apt. Or is it the Risen Jesus again? At one with the darkness of the landscape, and simultaneously at one with the dark night of our souls? 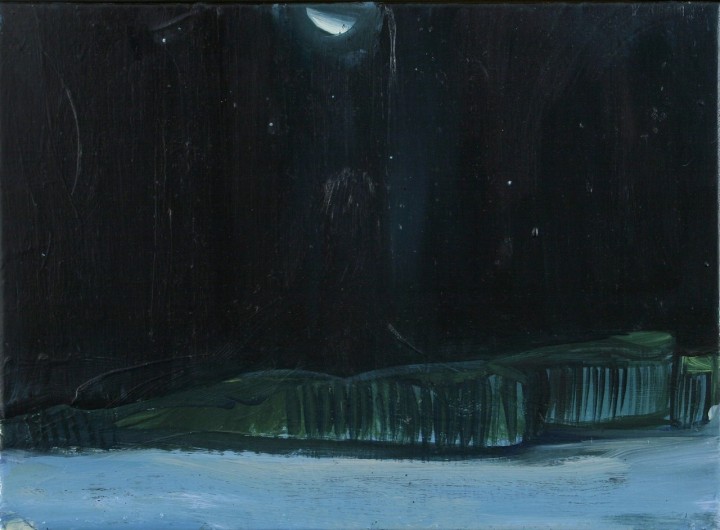 Anne Devine sees painting as a window to the infinite, where a subject can inhabit the mysteries of time, space and being on the 2D surface. She works spontaneously with a range of 2D media and organic material in the landscape, divining nature to find her subject, which over time and working from memory becomes distilled, in a synthesis of idea and form.

She writes “Sacred texts, poetry and my travels to New Mexico and the Isle of Mull in recent years have also informed this structural progression of my paintings towards abstraction.“

“Awe, joy and a sense of the sacred and of the infinite, has emerged for me through my daily drawings and paintings, in contemplation of our finiteness and the earth’s own duration, where the birdsong seemed to exist as a heavenly sound embroidery, across the majestic and fierce power of nature, to both destroy and renew.”

Sir James MacMillan (born 1959) is a Scottish classical composer and conductor. He was born ing Ayrshire and grew up in the town of Cumnock until 1977. He studied music composition at the University of Edinburgh as well as Durham, receiving his PhD in 1987, whilst a lecturer in music at the Victoria University of Manchester from 1986 to 1988. After his studies, MacMillan returned to Scotland, composing prolifically, and becoming Associate Composer with the Scottish Chamber Orchestra, often working on education projects. His musical language is flooded with influences from his Scottish heritage, Catholic faith and close connection with Celtic folk music, blended with influences from Far Eastern, Scandinavian and Eastern European music.

MacMillan came to the attention of the classical establishment with the BBC Scottish Symphony Orchestra's premiere of The Confession of Isobel Gowdie at the Proms in 1990. The work's international acclaim spurred more high-profile commissions, including from the Russain cellist Mstislav Rostropovich, the Welsh National Opera and the London Symphony Orchestra. MacMillan holds a poisition as Young Composer Mentor with the London Philharmonic Orchestra and is a patron of St Mary's Music School in Edinburgh, amongst numerous other honorary positions. MacMillan founded his music festival, The Cumnock Tryst, in October 2014, which takes place annually in his native Ayrshire. He was appointed a Commander of the Order of the British Empire (CBE) in 2004, and knighted in 2015.

Anne Devine (born 1960) studied in the drawing and painting department of Glasgow School of Art, graduating in 1981. An award winning artist, she received The J.D.Fergusson Travel Award to visit America in 2004 and the Scottish Arts Council Development Grant in the same year. She has exhibited widely in the UK and internationally in Germany, Italy and the USA. Participation in juried exhibitions in America brought her further awards as well as her first solo show in the USA at the Beaver Street Gallery, Arizona in 2005. Her work is in private and public collections including the Demarco European Art Foundation, Hospitalfied, Perth Museum and Art Gallery and the Peyton Wright Gallery, Santa Fe, New Mexico.