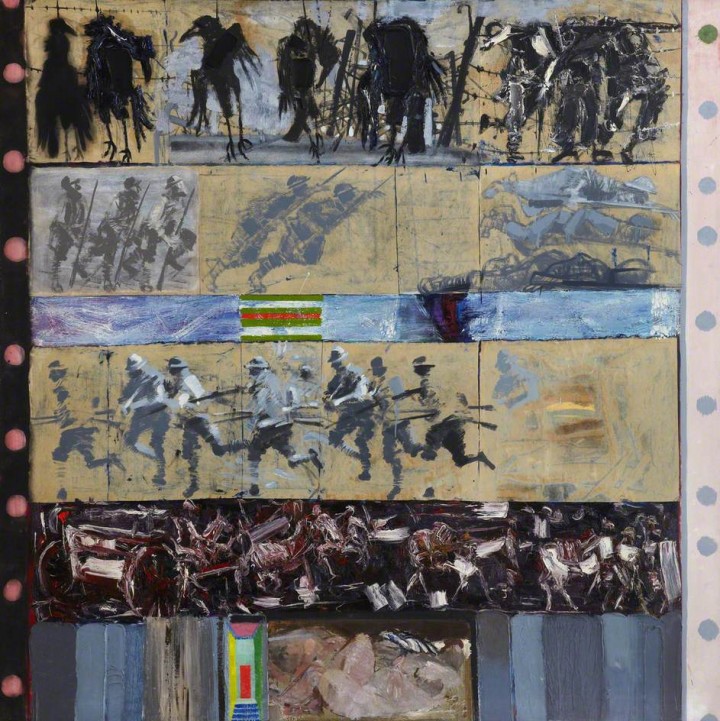 As an artist, my work DNA consists of countless strands and layers, built up over many years of looking, studying and making. It is therefore an impossible task to select one favourite Scottish work of art. As one develops, some influences are discarded or reinvented along the way but if one digs deep enough traces do remain. I have therefore chosen a painting by Sir Robin Philipson, one of the first Scottish artists I admired after seeing his work in the Royal Scottish Academy as a schoolgirl. My appreciation grew with more understanding as I progressed through the Art School system.

In my third year at Grays School of Art I wrote an essay on Oskar Kokoschka, entitled 'Bewitched, Bothered and Bewildered' and had not known that he had also been a major influence in Philipson’s early work. However, whilst Philipson was interested in the technical strategies and not the subject, I was intrigued that Kokoschka was reaching into the mind and soul of the sitter through mark making and thin washes of paint.

The painting by Philipson I remember from an RSA Annual Exhibition in the late sixties, early seventies, may have been Defenders of the Realm, (1965) which filled the entire end wall in the main gallery. This was a polyptych in oil and vinyl toluene, similar to an Italian altarpiece, consisting of a centre square panel with two side wings with a predella of five panels beneath.

Most of his works contain a mixture of abstraction and realism, often portraying theatrical Gothic interiors and rose windows. The radiant flashes or strips of colour reinforce the architecture or divide up the picture plane into sections. Even now, the sheer technical virtuosity, colour and aesthetic still impresses. As a student, I confess to attaching a small plastic filigree doily to the surface of a painting to simulate a rose window and embedding it in paint. They were not all about the beauty and pleasure of ‘belle peinture’, which has at times been a curse on making serious Scottish art. Philipson does not shy away from works depicting war and suffering or taking on difficult and much painted subjects such as the crucifixion. 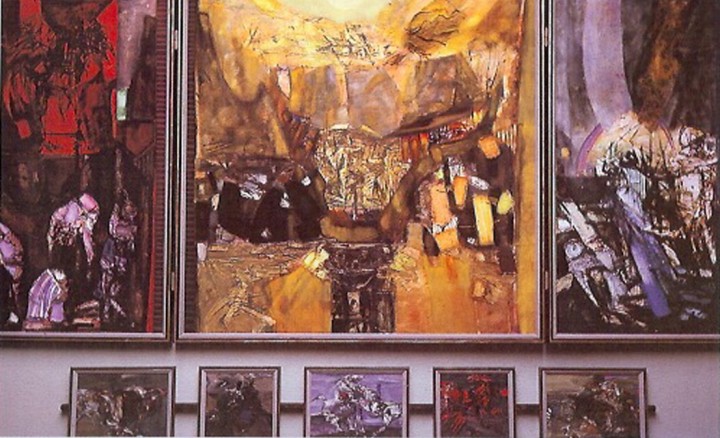 Philipson was born during the First World War. His early life would have been marked by the continuing grieving aftermath affecting most families and by his subsequent drafting to the Kings Own Scottish Borderers during the Second World War. He then joined the Royal Indian Service Corps ending up on Assam’s border with Burma, close to the battlefront with the Japanese and the bitter fight for Kohima. The magnificent Defenders of the Realm was one of a series of 1914 -1918 works Philipson evolved after seeing a war film where a soldier was being dragged through the snow, then tied to a stake and shot as a deserter to background music of haunting Christmas Carols.

I have chosen Stone the Crows, as it is lodged in the Royal Scottish Academy Collection and forms part of the First World War group. Stone the Crows has six horizontal bands painted across the picture plane like a sequence of film negatives. The top row depicts crows hanging on barbed wire, an eerie sight often seen in the countryside. It is reminiscent of the soldiers caught in the wire after their dash through no man’s land only to find the shelling had failed to break it. The next two strips are taken from familiar black and white footage of the men going over the top during the Somme offensive. The figures going in and out of focus very much creates the effect of movement.

The fifth strip is a very richly textured almost abstracted tangle of a gun carriage, soldiers and horses floundering in the mud. In the centre of the bottom panel is a reclining nude, she may represent Mademoiselle from Armentieres from the bordellos behind the front lines. Despite the carnage and horror represented, it is painted in a wonderful harmony of beige, greys, blacks, soft traces of blue and highlighted by two small passages of bright colour.

The compositional arrangement would appear to have been very much influenced by the silkscreen paintings of Robert Rauschenberg around the same period. For many years I have been making work in response to various wars, led by the legacy of disruption and dramas the Second World War continues to have on my family, so these paintings are very close to my own desire to create memorials as a commemoration. It makes some of Philipson’s work as relevant to me today as it was when I was a student but for different reasons. 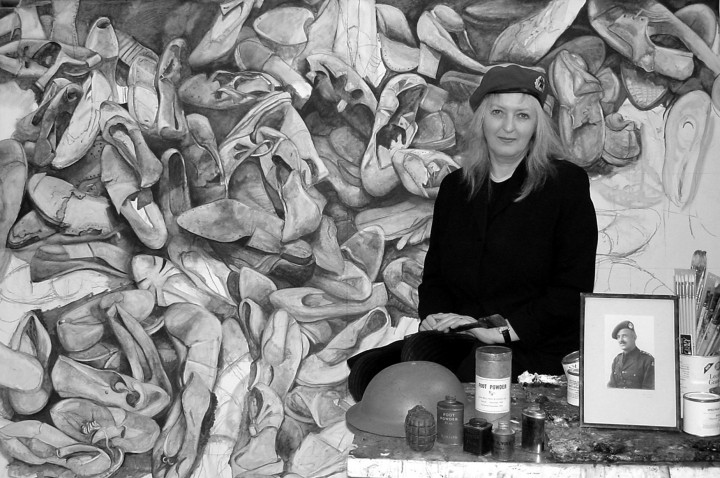 Joyce W. Cairns in her studio, in front of Shoes from Majdanek, 2002-05. Image courtesy the artist.

Joyce W. Cairns PRSA DEd(hc) HRA HRHA HRWA HRBA RSW MA(RCA) (born 1947) was brought up in Edinburgh. She attended Grays School of Art, Aberdeen from 1966-71, The Royal College of Art, London 1971-74 and was awarded a Fellowship at Gloucestershire College of Art and Design, Cheltenham, 1974-75.

Once she had completed her art teacher training at Goldsmiths College, University of London, she returned to teach at Grays School of Art in 1976-2004. She took early retirement in order to complete the vast body of large scale works and the publication for her major 'War Tourist' exhibition at Aberdeen Art Gallery in 2006.

Cairns’ work is mostly autobiographical, based on family memories as a child growing up post war, intermixed with current experiences. They are often woven around the village of Footdee at the mouth of Aberdeen harbour, where she has lived since 1979. Her work references different wars based on extensive tours in Europe and Tunisia not only researching her father’s war but gathering information in various war museums providing her with access to the relevant artifacts of the period which give the work authenticity.

She has won many awards and is featured in many publications on Scottish Painting. Cairns’ work has been exhibited in serious group exhibitions since 1970, as well as having solo exhibitions in Scotland, London and Canada. Her work is held in numerous collections, including Aberdeen Art Gallery, GOMA, the British Museum, Graves Art Gallery and Museum, Sheffield, The National War Museum, Edinburgh, the Fleming Collection and the McMaster Museum, Hamilton, Ontario. Cairns became an Associate Royal Scottish Academician in 1986, and a full RSA in 1998. In 2018 she was elected the first female President of the Royal Scottish Academy in its 192 year history. 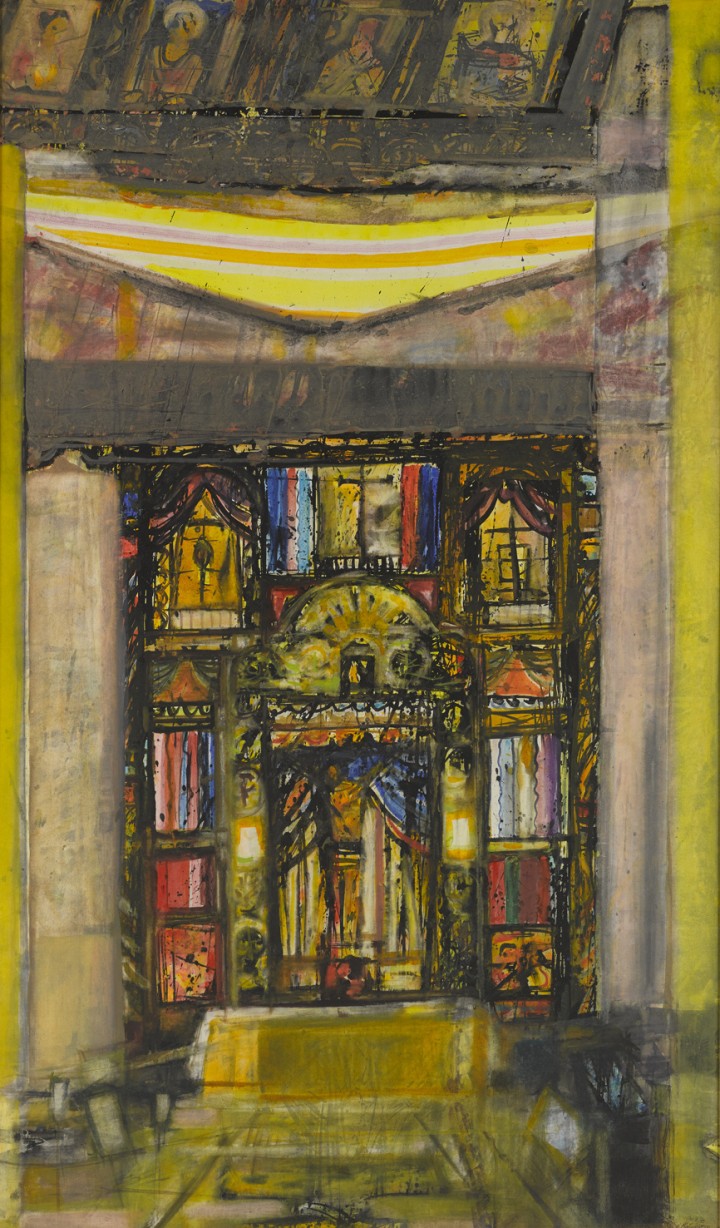 Sir Robin Philipson (1916-1992) was born in Cumbria and moved to Scotland in his teens. He studied art at Edinburgh College of Art, joining the teaching staff in 1947, where he would eventually become Head of Drawing and Painting. Having played a major part in the Scottish art scene over a number of decades, Philipson was elected President of the Royal Scottish Academy in 1973, holding the post for ten years. In 1976 he was knighted for services to the arts in Scotland.

Philipson’s art concentrated on colour, material and process, working with subjects including landscape, architectural interiors, human commentary and still life. He was strongly influenced by William Gillies, sharing membership with the Edinburgh School. His work is in the collections of the National Galleries of Scotland, the Government Art Collection, the Fitzwilliam Museum, the Royal Academy of Arts and the Fleming Collection, amongst many others.