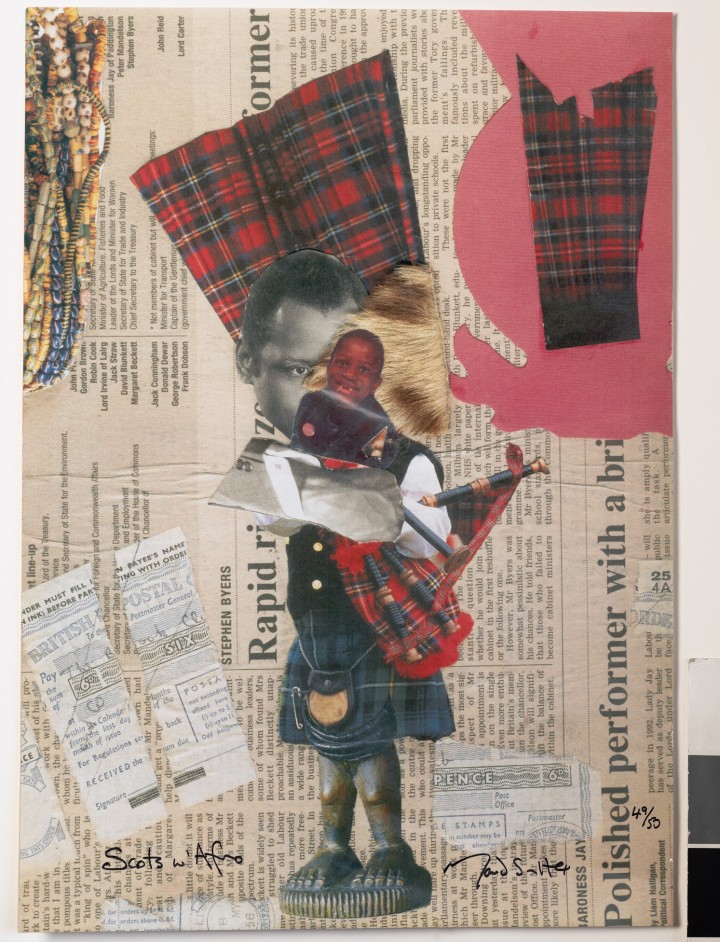 The late Scots-Ghanaian artist and writer Maud Sulter (1960-2008) is known primarily for series such as ‘Zabat’ (1989), ‘Hysteria’ (1991), ‘Syrcas’ (1993), and ‘Les Bijoux’ (2002), major bodies of work whose central aim was to foreground the role of black women and their contribution to art and cultural history, from Edmonia Lewis and Jeanne Duval to Alice Walker and Lubaina Himid. These critical intentions were elegantly and eloquently expressed through photography, photomontage, film and installation produced by Sulter from the mid-1980s to her death in 2008.

Born in Glasgow to a white Scottish mother (Elsie, a tram conductress) and a black Ghanaian father (Claude Ennin, a surgeon and diplomat) Sulter was raised by her mother in the Gorbals area of the city. She left Scotland at the age of 17 to study fashion in London before embarking upon a multi- faceted and prolific career as a poet, feminist activist, curator, academic, writer, publisher and artist; activities which were united in their attempt to centre and showcase black women’s creativity. New audiences to Sulter’s practice are perhaps less aware of her enduring interest in Scottish history, culture and language, subjects which form an unbroken thread woven through her visual art and writing and often intersect with the recurrent themes of class, race, gender and sexuality in her work.

In his essay for Passion, a 2015 book produced in celebration of Sulter’s legacy, Malcolm Dickson, Director of Glasgow’s Street Level Photoworks (and a longstanding champion of Sulter’s work) highlighted the Scottish links that permeate Sulter’s practice, including ‘Alba’ (1995) and ‘Twa Blak Wimmin’ (1997), noting: ‘Maud Sulter was proud of her Scots heritage. Her writings, photographs and a short film, ‘No Oxbridge Spires’, explore growing up in Glasgow [...] Her art has been acquired by many Scottish public and private collections, including the Scottish Parliament.’ This pattern has continued. Over the last year alone, Sulter’s work has been exhibited at the Wardlaw Museum (University of St Andrews), Pollok House, Glasgow, and as part of a group exhibition, Afro Scots: Revisiting the work of Black Artists in Scotland through New Collecting, curated by Mother Tongue at the Gallery of Modern Art, Glasgow. A symposium on her work has been held at Glasgow Womens Library and a new film, ‘Maud’, has been screened at the National Library of Scotland, part of a longer project on Sulter’s work by the Edinburgh collective Rhubaba.

In October 2022, The Fleming Collection, whose recent exhibition Scottish Women Artists Transforming Tradition at the Sainsbury Centre, Norwich, included Sulter’s work, acquired ‘Scots w’Afro’, a 2002 laminated colour print from a 1999 photomontage (number 49 in an edition of 50). At the time of its creation Sulter had moved back to Scotland and was working on a series of projects, including ‘Les Bijoux’, for her major exhibition, Jeanne Duval: A Melodrama, at National Galleries of Scotland held in 2003. In the same year she sold the ‘Scots w’Afro’ print in aid of the Thistle Foundation, a Scottish charity supporting people with long-term health conditions and disabilities. In 2002, she had exhibited her work at the Glasgow School of Art (Speak English, with Lubaina Himid) and published her play, ‘Service to Empire’, which was recently performed for the first time in an abridged version by Adura Onashile (co-curated by Mother Tongue and National Galleries of Scotland). In both her writing for ‘Service to Empire’ and her visual artwork for ‘Scots w’Afro’, Sulter explicitly addressed bi-racial Scottish and African identity. She explored the links between West Africa and Scotland through a reimagined account of the life of Jerry (JJ) Rawlings, former president of Ghana, in ‘Service to Empire’ and critically examined broader questions around Black Scottish identity through the imagery and symbolism of ‘Scots w’Afro’.

In common with many of Sulter’s works, ‘Scots w’Afro’ abounds in references to canonical art history, including Scottish painting and photography, often with incisive and well-aimed irony. The gestures and poses of Sulter’s characters in ‘Hysteria’ (1991), for example, recall the Eighteenth-century portraits of Allan Ramsay, painter to patrons including Scots such as Daniel Cunyngham, whose vast wealth was increased by their involvement in the Transatlantic trade of enslaved African people and their ownership of plantations in the West Indies. Likewise, in ‘Scots w’Afro’, we might see compositional echoes of the grand portraiture of the late eighteenth and early nineteenth century Scottish painter Henry Raeburn: in terms of subject matter, where Raeburn celebrates his sitters’ wealth and status, ‘Scots w’Afro’ could be seen as decolonial recasting of his portrait of ‘Sir Euan Murray-Macgregor’ (1797-99), who went on to become a colonial administrator and governor in the West Indies in the years leading up to and beyond the abolition of slavery.

In Sulter’s hands, ‘Afro’ meets ‘Scots’ in the form of a full-length portrait composed of highly charged fragments. Overlaid onto the politics pages of a contemporary newspaper, the shape of a large, red thistle appears to the top right. On the top left, colourful strands of cowrie bead necklaces hang into the frame, representing their history as currency and symbols of wealth, power and good luck in West African culture. The central figure, like many of Sulter’s photomontages, including her 1993 series ‘Syrcas’, is composed of elements of African figurative sculpture and photographic portraits. A vintage British postal order, in pre-decimal currency, is pasted to the bottom left of the composition while a kilt, sporran, bagpipes and headdress, in Royal Stewart tartan, dominate the image, completing the body of the figure. Art historian Viccy Coltman has described the use of tartan in art as a ‘potent agent in the pictorial representation of identity’ and Sulter’s choice of the iconic Royal Stewart cloth is undoubtedly political. Designed in 1831 (immediately preceding the abolition of slavery in the UK), it was the personal tartan of Queen Elizabeth II. In its darker blue and green colourway, it is also the tartan of the pipers of the Black Watch, the infantry battalion of the Royal Regiment of Scotland.

The acquisition of this work by the Fleming-Wyfold Art Foundation for the Fleming Collection, one of the most significant collections of Scottish art outside public institutions, is symbolic of the Collections’ recent and concerted efforts to expand the parameters of its holdings, with a particular focus on art by women from Scotland. It also represents the ongoing need for Scotland itself to wrestle with its own history and identity, including its role in Empire. The work also alludes to the necessity for Scotland to acknowledge and celebrate its debt to the contemporary and historical immigrants who have so enriched its culture, and to include people of all races and ethnicities as ‘Scottish’. In this aim, Sulter’s poem, ‘Circa 1930’, could be seen as a poetic companion piece to ‘Scots w’Afro’: ‘the cultures of Ghana and Scotland / are not as disparate as they might / at first seem. Clan- based societies / with long memories and global diasporas.’

Professor Susannah Thompson is Head of Doctoral Studies at Glasgow School of Art and an art historian, writer and critic. The work of Maud Sulter is a key focus of her recent research.