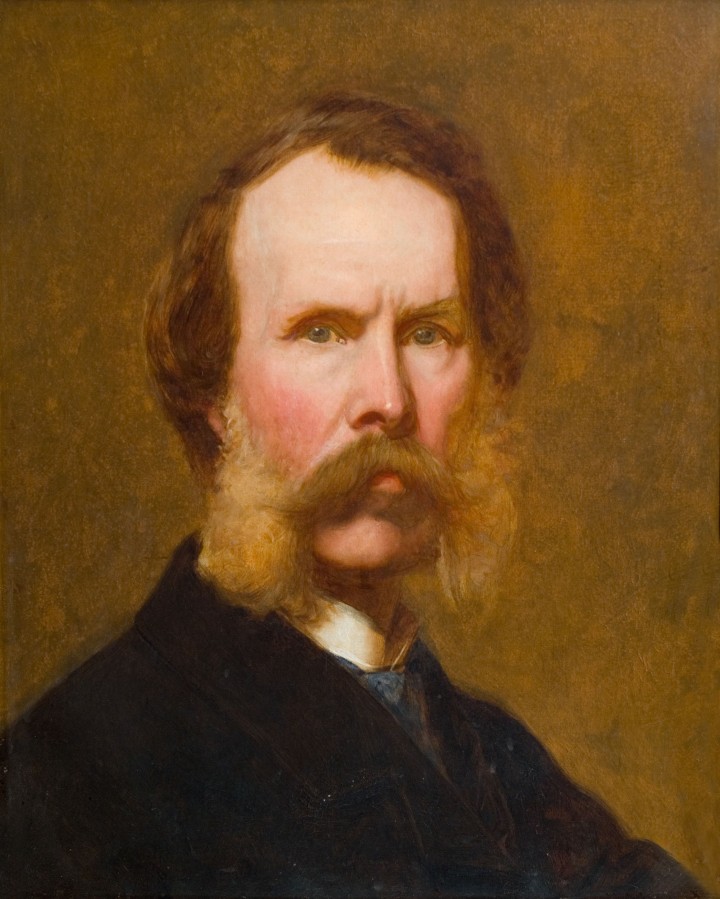 John Faed was born at Barlay Mill Gatehouse of Fleet on 31st August 1819. He was the oldest of six children, five of whom would see their works exhibited at the Royal Scottish Academy in Edinburgh or the Royal Academy in London. It was the obvious success of the Faed family of artists that encouraged some local families to believe that their children could become successful painters too.

John Faed showed a precocious talent and learnt to paint miniatures as a boy, before moving to Edinburgh to pursue his career, where he was elected an associate member of the Royal Scottish Academy in 1847 and a full member in 1851. The attention to detail seen in his early miniatures continued in larger works such as The Evening Hour of 1847, Rosalind, Celia and Orlando of 1851 and The Cruel Sister. Although he later moved to London, John’s heart was always in Gatehouse and it was here that he built a house in 1868 settling permanently about 1880 and using local models in many of his pictures. 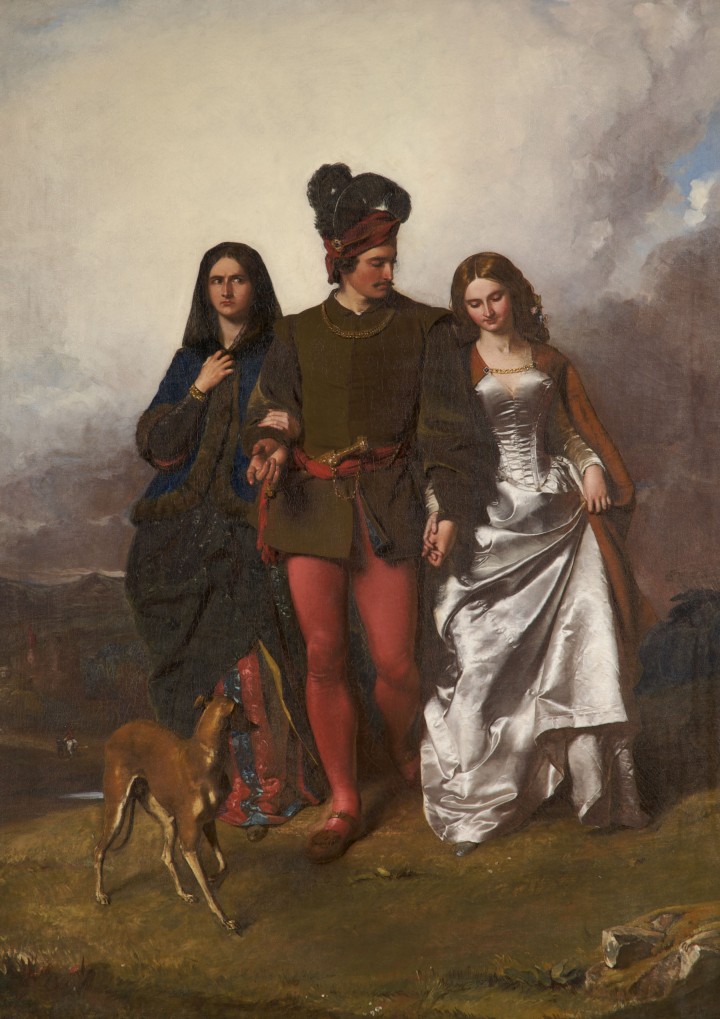 Faed’s favourite model was Sandy Inglis, a Gatehouse resident who appears in many of his pictures, such as The Battle of Blenheim, and the impressive Statute Fair-Hiring for which Faed was paid £1200 in 1870.

In 1880, when E. A. Hornel was about to set off for his studies in Edinburgh he received a letter from his great uncle telling him that it must be his ambition to outdo the Faeds.

When Hornel returned to Scotland from his studies in Antwerp he invited his friends Guthrie and Henry to come down to Kirkcudbright. The Kirkcudbright Fine Art Association was formed with John Faed as President. It was at this time, too, that Faed advised Hornel to paint the Borgue coast; Brighouse Bay, featuring in so many of the latter’s works.

The first exhibition of the Fine Art Association opened in Kirkcudbright in December 1886. When the local press criticised the young artists they sought John Faed’s advice. He told them to pay no attention to these critics. 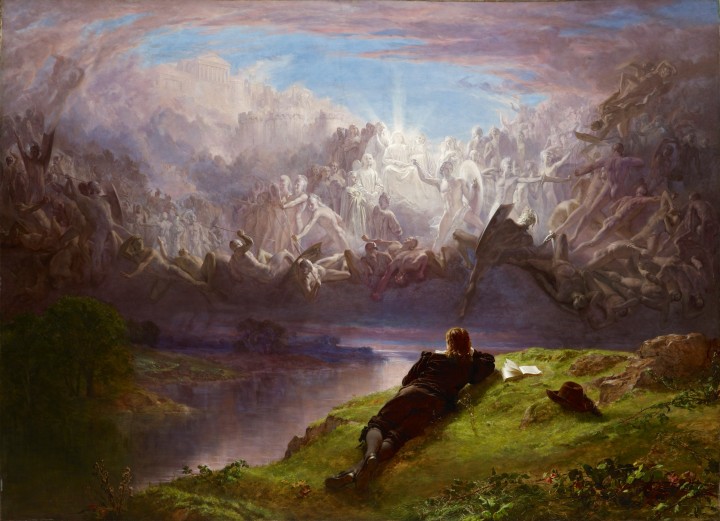 When John’s house and contents were sold in 1909, Hornel purchased Faed’s portrait of his mother, and hung it in the dining room at Broughton House, a tribute to the role which John had played in encouraging the young artist.

Without the example of the Faeds and John’s support, Kirkcudbright might never have become the artistic centre it is today. The 1886 exhibition helped to launch the careers of artists such as E. A. Hornel, W. S. MacGeorge and William Mouncey, so it is fitting that the Kirkcubright Galleries should have mounted an attractive exhibition to honour the man who paved the way for others. 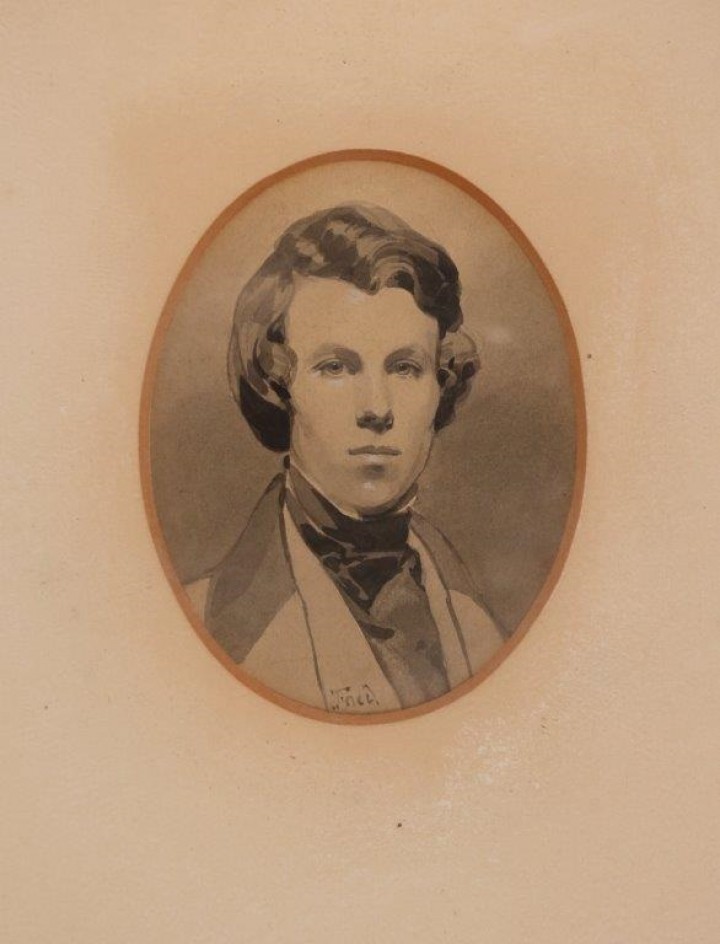 David Steel was brought up in Gatehouse near where John Faed lived. He became aware of Faed’s work when, as a boy, he was shown a picture which John had painted of David’s great grandmother. When David retired he began his research on the artists of Dumfries and Galloway for the Artists’ Footsteps web site. He is the author of John Faed RSA The Gatehouse Years and other studies of Galloway based artists. David has co-curated the John Faed: RSA Exhibition alongside Kirkcudbright Galleries.
John Faed (RSA) Bicentennial Exhibition, Mitchell Gallery, until 10 November