Jock McFadyen Goes to the Pictures 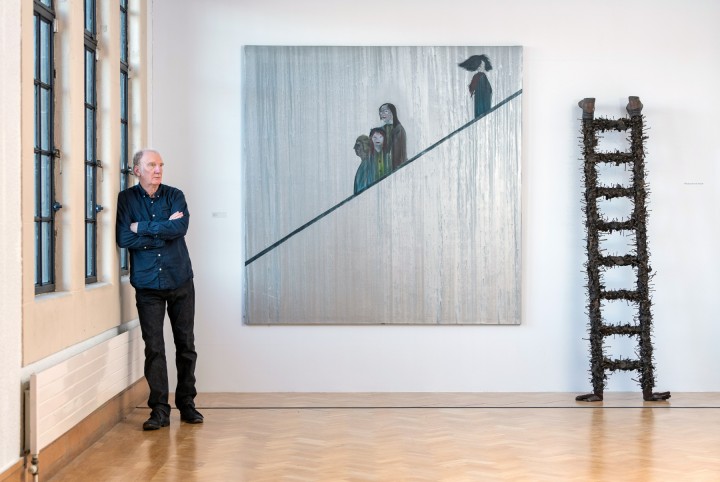 Sitting in a room next to his exhibition at Edinburgh’s City Art Centre (CAC), Jock McFadyen talks with an air of satisfaction. First postponed by the pandemic, then rushed on to the walls to beat a second lockdown, the fact that ‘Jock McFadyen Goes to the Pictures’ is now open and receiving visitors is nothing short of “a blooming relief”.

A year-long programme of exhibitions planned for 2020 to mark McFadyen’s 70th birthday and the publication of a new monograph was hit four-square by the pandemic. Now, ’Tourist Without A Guidebook’ will open at the Royal Academy in London in February 2021, followed by a festival show at Dovecot Studios in the summer and a retrospective at the Lowry in Salford.

For the CAC show, McFadyen, who describes himself as “an English artist who happens to be Scottish”, plundered the storehouses of the City of Edinburgh’s art collection, pairing his own paintings with a broad range of works both historical and contemporary. It’s a unique chance to see a spectrum of McFadyen’s own work from the last 42 years alongside works by Joan Eardley, Alan Davie, Wilhelmina Barns-Graham and the 17th century portrait painter David Scougall, among many others. 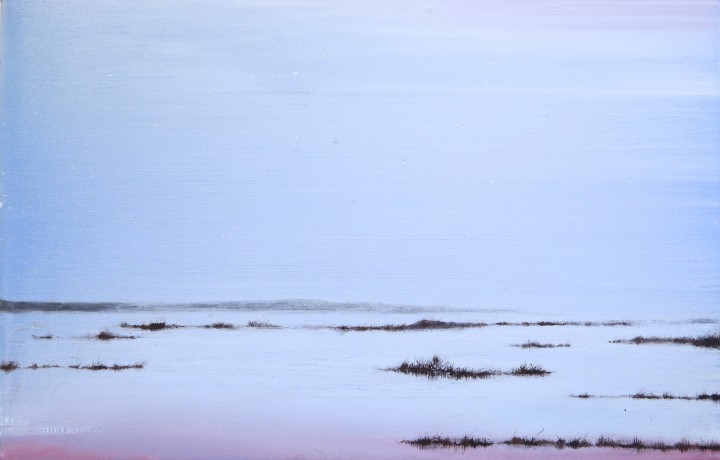 The pairings are surprising, often witty. Sometimes the connection is thematic, like setting his own paintings of poverty in the East End next to Thomas Begbie’s historic photographs of Edinburgh’s Old Town. Others are purely visual, like pairing Callum Innes’ abstract with his own (surprisingly similar in form) painting of a motorway flyover. “I knew I wanted to find things that would have connections which would surprise people,” he says. “Because people put pictures in chronological boxes, or national boxes, they don’t imagine that they have anything in common. I’ve always seen the similarities across genres.”

McFadyen was born in Paisley and spent his first 15 years in Renfrew; his father worked as a draughtsman in the shipyards. Then, McFadyen senior got a job in Stoke on Trent, “so the whole family was piled into the Morris Oxford and driven down the M6. The funny thing is, because I was an 11-plus failure, if I’d stayed in Scotland I wouldn’t have been able to go to art school. England felt much more liberal. I remember riding my motorbike to see the Stones in the Park in 1969. I embraced all that stuff.”

After a foundation course at a college in Newcastle-under-Lyme (he was expelled for burning an effigy of the principal in protest at a change in the school’s direction), he worked as a dustman, before securing a place at Chelsea School of Art in 1972 and heading for the epicentre of swinging London. “It was still the sixties, really. Every other shop was a boutique or a coffee shop. And then by my second or third year, everything was swept away by punk, it went from Harley Davidsons and cowboy boots to people with rings through their noses and mohicans, almost overnight. The [Sex] Pistols played in the refectory and we all threw beer cans at them because they were crap. And the next thing they were famous.”

There was a punkish energy to his early paintings, violent, witty, self-referential. He had his first solo exhibition in 1978, the year after he left Chelsea, and by the following year he had a dealer. Then, in 1981, he was chosen to be artist in residence at the National Gallery. “Under the weight of 2,000 Old Master paintings, it all began to feel a bit slight. It rearranged me, that experience.” 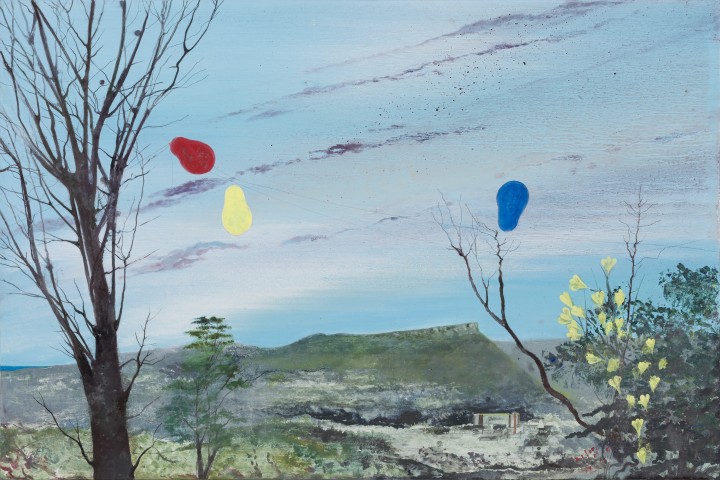 His response was to start to paint exactly what he saw, “with no agenda, the fly on the wall, like Goya in ‘Disasters of War’ just saying ‘I saw this’. It was one of those epiphany moments. I’d go about like a stalker photographing people with a long lens. And this was before digital, so I’d be in Supasnaps every other day getting those envelopes with snapshots of some old bloke walking down the road. It was quite weird, but I knew I was onto something.”

He painted the world around him in the unreconstructed East End, tramps and skinheads, litter, graffiti. It was a major change, but his dealer supported him. McFadyen has a determination that is hard to shake, and is cheerfully opinionated on everything from the art business (“a huge, very corrupt business”) to Boris Johnson and Brexit (he has a home in France). He needed a way through, so he made one.

In the 1980s, his subjects were people, but by the end of the decade, the figures were starting to recede. “I realised, after a few years, that I was spending more time constructing the background than on the figure. The figure was a sort of quick thing, the real job of the painting was the formal resolution to make the background work. It dawned on me that I was painting places rather than people.”

This was confirmed when he was commissioned to design sets for Kenneth MacMillan’s ballet The Judas Tree. For the first time, the figures vanished from his work completely and, when he returned to painting, they were gone (they return occasionally, but are rarely exhibited). Without them, it is as if the core of the painting has been made visible. 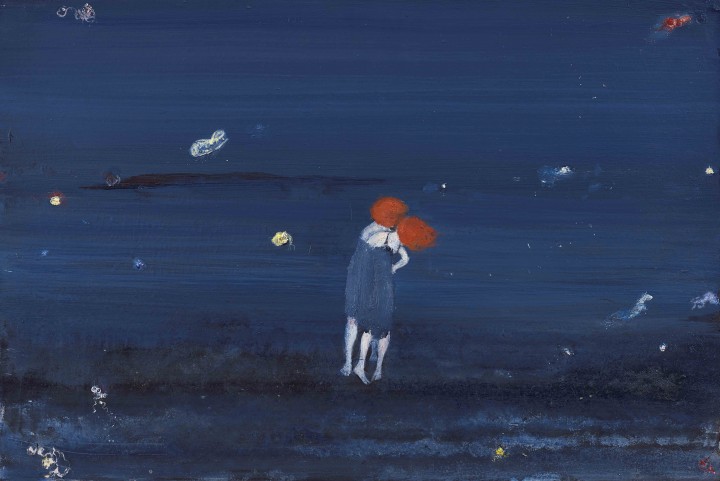 In the 1990s, he became a painter of the edgelands of London, prowling the periphery on one of his collection of motorbikes, or walking in the company of writer and psychogeographer Iain Sinclair, capturing derelict factories, boarded up warehouses, stagnant canals, empty roads at night. Most of the places he painted have since been transformed as his home stamping ground of East London morphed into hipster central.

His election to the Royal Academy in 2012 brought him into the fold of the country’s top artists, but he says he still prefers the company of writers, musicians and filmmakers to other painters. “I never wanted to be part of a group of artists. I don’t want to be a chapterlet in the unfolding story of art. I’ve always been more interested in people doing the same subject as me but in other media; music, movies and the novel, that’s what I love.”

He might be best known as a painter of urban edgelands, but the work in the City Art Centre reveals another aspect - beautifully meditative rural landscapes: the beach at Carnoustie, a calm sea off the Uists, a garden in Jura, places he and his wife Susie have visited since “deciding to see more of Scotland before we pop our clogs”.

He half smiles. “I’m interested in places where the urban gives way to the landscape and the landscape encroaches on the built environment. But you can go two ways from that: you can reverse back onto the hard shoulder into the city, or you can go the other way into the sublime.” 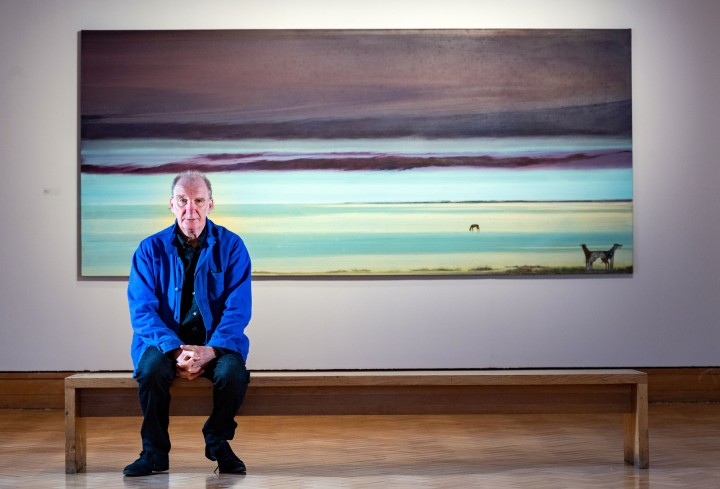