Inverleith House reopens in full bloom with 'Florilegium: a Gathering of Flowers' 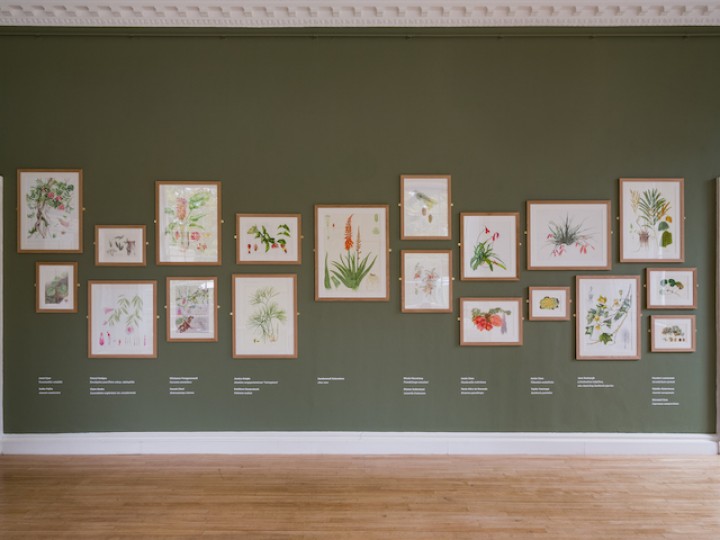 Inverleith House sits amidst a riot of colour as Edinburgh’s Royal Botanic Gardens (RBGE) explodes with autumn shades. And, for the first time in a long time, there’s colour inside too, with a new exhibition which brings together a mixture of botanical and contemporary art.

Florilegium: a gathering of flowers celebrates not only the reopening of the house after lockdown, but the building’s return to regular arts programming after five years in which its future seemed uncertain. Inverleith House closed as a contemporary art space in 2016 as RBGE apportioned funds elsewhere, bringing to end an illustrious history as a gallery and sending shock waves through the visual art community.

Now, it is reborn, following the announcement in May of a £150,000 Transformative Grant from the Outset Contemporary Art Fund in partnership with the Serpentine Gallery in London’s Hyde Park. As Climate House, it will engage in a three-year programme bringing together artists and scientists to consider issues of climate change, ecology and biodiversity. 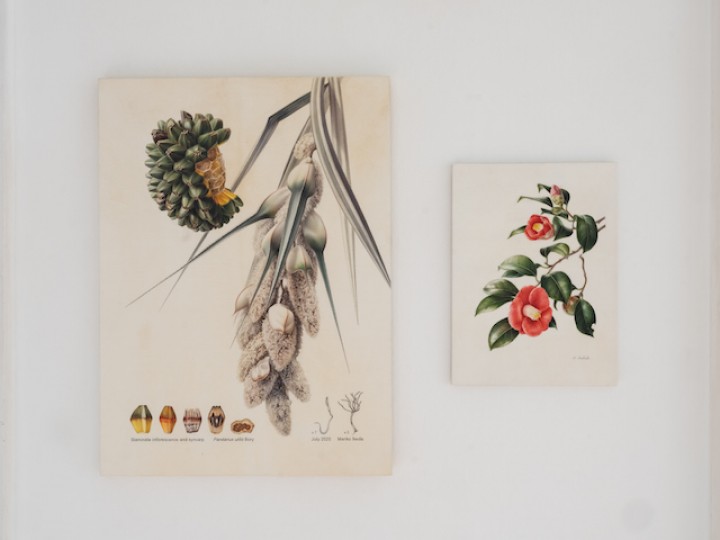 “I was very attracted to the potential of science and art coming together,” says Emma Nicolson, head of creative programmes at RBGE, formerly director of Skye-based Atlas Arts. “The work I’d been doing in Skye was very much about bringing people together, including taking an ecological approach. My hope is the house will be a space for dialogue and for action, a place to come and gather.

“The Climate House programme is a catalyst for artists and scientists to come together and explore their work and talk about ecology and the situation that we find ourselves in. That might be looking at really complicated data and making that more accessible through an approach that comes from contemporary art.”

The funding represents an opportunity to bring artists together with RBGE scientists engaged in researching issues of climate change and biodiversity loss in Scotland and around the world. The Outset funding paired Inverleith House with the Serpentine, another park-based gallery, engaging with ecology through its Back to Earth initiative. 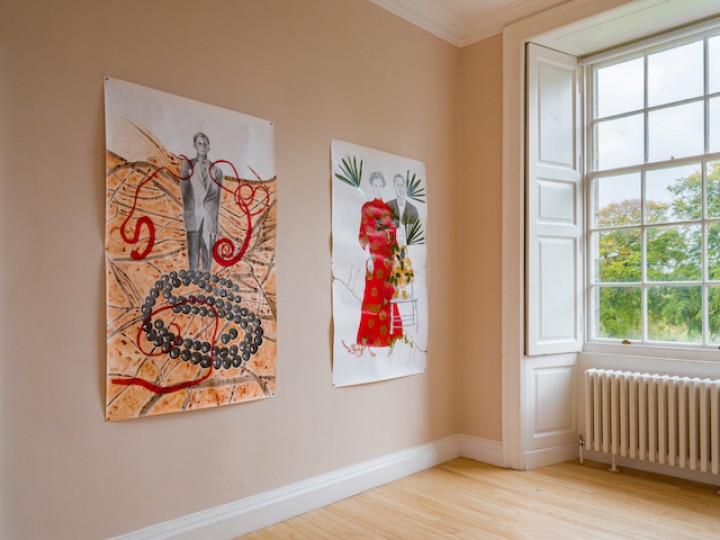 'Florilegium: A gathering of flowers' installation shot. Annalee Davis, 'As If Entanglements Of Our Lives Did Not Matter'. Image by Tom Nolan.

While Nicolson says she has spent much of lockdown “un-producing” the exhibitions and events she had planned to celebrate the Gardens’ 350th anniversary, next year looks set to be busy, with shows including an immersive installation by Australian artist Keg de Souza and a solo exhibition by Scottish artist Christine Borland.

She adds that she would also like to celebrate the history of the house, used in the 19th century as a family home for the Regius Keeper of the garden, and serving as the first Scottish Gallery of Modern Art in the 1960s. Inverleith House opened as a contemporary art gallery in 1986 under the curatorship of Paul Nesbitt, who created a programme of world-class shows in his 30-year tenure, featuring artists such as William Egglestone, Robert Ryman and Louise Bourgeois as well as offering key shows to home-grown artists from Douglas Gordon to Cathy Wilkes.

Botanical art always had a place in the programme, and now one of the spacious downstairs rooms is bursting with colour, showcasing work by some of the world’s top botanical illustrators. Artists from countries as diverse as India and Brazil responded to an open call to illustrate important plants from the gardens’ collection and glasshouses. 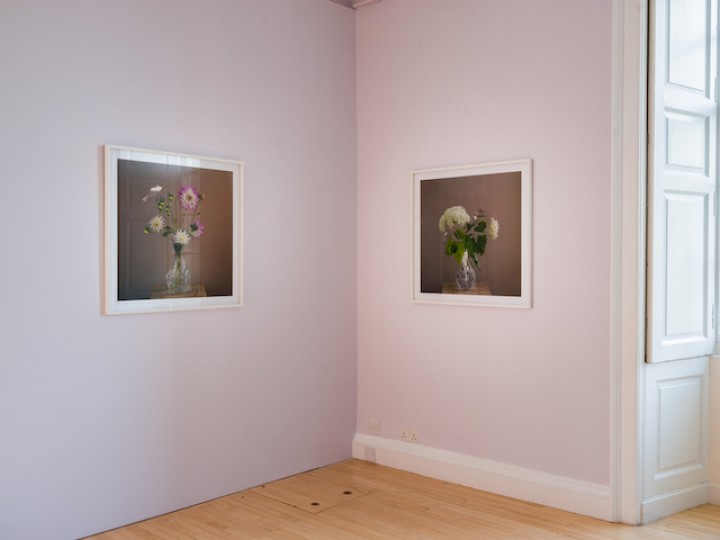 Nicholson says Edinburgh is one of the few historic botanic gardens not to have its own Florilegium - a collection of botanical drawings and paintings - and this show is a first step towards making one, but with a twist: it will also include work by contemporary artists. “I introduced the idea of bring contemporary artists into that conversation. It’s a big shift for the Gardens, but it’s also about bringing audiences together. I really hope that our contemporary art audiences will enjoy some of these extraordinary botanical illustrations.”

The work of the four contemporary artists in this show - photographer Wendy McMurdo, film-maker Lyndsey Mann, Annalee Davis, from Barbados, and Taiwanese-American artist Lee Mingwei - demonstrate how many themes can be touched from a starting point of plants.

McMurdo’s work celebrates the surprise flowering of giant Himalayan lily in her garden at the height of the pandemic, shortly after she lost her mother to coronavirus. The theme of mortality and renewal is also captured in Lee Mingwei’s work, ‘100 Days with Lily’, which he made after deciding to live for 100 days (the traditional period of Taiwanese mourning) with a Narcissus, or Lent Lily, after his grandmother’s death. 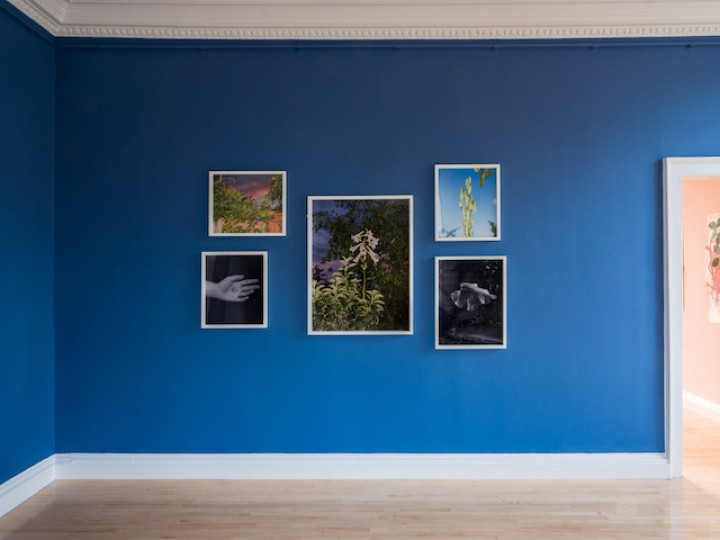 Barbadian Annalee Davis incorporates plant drawings into works which explore her mixed-race heritage, produced on old ledger pages from the sugar cane plantation where her ancestors worked. Lyndsey Mann’s film essay, ‘A Desire for Organic Order’, made largely at the RBGE Herbarium, touches on plant collecting, colonial history, belonging and what it means to be considered native.

As far as the future of Inverleith House is concerned, it’s an encouraging show, suggesting that a specific thematic focus for the programme might not narrow the field of engagement, but open it up to a wide spectrum of issues. For the time being, it is simply a pleasure to see these elegant rooms full of art again, even as the trees outside are full of colour.

Florilegium: A gathering of flowers, is on at Inverleith House until 13 December. Entry is free, but visitors have to book a timed ticket to enter the gardens, visit here.