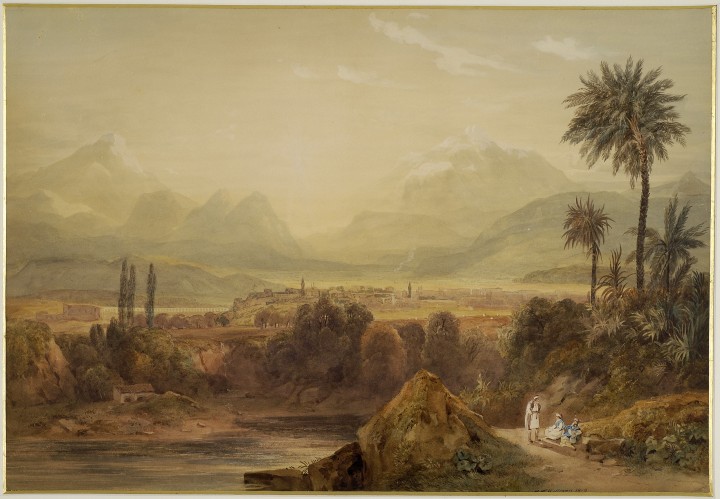 The year 2021 will hopefully become one to celebrate, but it is already an important year for Greece, marking 200 years since the War of Independence was declared in 1821. That year, Greek uprisings began across the country against the Ottoman Empire, who had ruled over Greek lands since the fall of the Byzantine Empire in the 15th century. War waged, with numerous victories and defeats on both sides, until the decisive victory of the Greeks, supported by the three ‘Great Powers’ (Britain, France and Russia), at the naval Battle of Navarino on 20th October 1827.

Following this, a new, free Greek state was declared under the Governorship of Ioannis Kapodistrias in 1828. While this was by no means the end of the Greeks’ struggle for independence – civil conflicts and land disputes with the Ottomans would continue until the 1920s – it marked an important turning point in their independent history, leading to the nation that the we would now recognise as modern Greece.

News about this revolution spread across Europe, the narrative of a suppressed nation battling their oppressor creating a great deal of support for the Greek fighters across society, known as 'philhellenism'. Greece had always held a romantic place in the minds of Western Europeans, based on the memory of antiquity and promoted through a Classical education. Due to its occupation by the Ottomans, Greece still represented an elusive destination, its lands, people and stories still largely figures of myth. However, at the beginning of the 19th century a greater number of artists, writers and academics began to travel to Greece, including the Scottish artist Hugh ‘Grecian’ Williams. The artworks he made in response to his travels would provide a focus for philhellenism in Scotland and a major influence on the Greek revival movement in architecture.

Hugh William Williams was most likely born in Devon around 1773, but lived in Edinburgh from at least 1790 and made it his home until his death in 1829. In the early 19th century he began to build a name for himself as an artist, exhibiting at the Royal Academy in London and the Associated Artists in Edinburgh, producing watercolours and prints of Scottish ruins and landscapes, in the picturesque style influenced by Claude Lorrain. These were amongst the first depictions in colour of many of these scenes, becoming popular inspiration for tourists travelling to Scotland over the course of the century. However, it was his experiences in Greece, during a Grand Tour made between 1816-18, that were to define his career and future reputation.

Williams travelled widely in Italy before arriving in Greece in February 1817. He travelled down the west coast of the country under the protection of an armed squadron, visiting the Ionian islands, including Corfu and Ithaca, before arriving at Patras on the mainland in April. Williams made drawings which would later lead to large exhibition watercolours he made on his return to Scotland, visiting Delphi, Thebes and eventually Athens for around two weeks in May of the same year. As noted by Joseph Rock in his exhaustive PhD thesis on Williams, it is remarkable that that such a short trip would have such an impact on the rest of his life.[1]

Upon his return to Scotland, Williams had major exhibitions in Edinburgh in 1822 and 1826 of his large watercolours of Greece, depicting scenes including magnificent views of the Parthenon and the Temple of Aphaia on Aegina. Their popularity led him to create a book, Select Views of Greece, first published in 1823, of etchings made after his watercolours to further disseminate them, leading to his nickname Hugh ‘Grecian’ Williams. These works were defined by their large scale and wide panoramic views, bathed in a ‘golden glow’ as described by Richard Stoneman in his pivotal study of travellers in Greece, Land of the Gods.[2] Despite their visual poetry, the works were highly accurate in their depictions of architecture, influencing the work of many Scottish architects of the Greek Revival movement, such as William Playfair and Thomas Hamilton, and were significant for the construction of the National Monument of Scotland on Calton Hill. 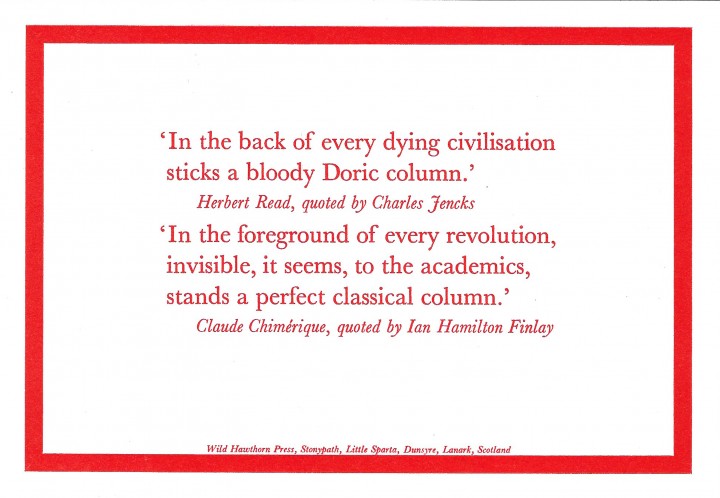 Ian Hamilton Finlay, 'In the Back of Every Dying Civilisation...': Finlay's own homage to the enduring supremacy of the ancient civilisation of Greece. The Fleming Collection Ⓒ The Estate of the Artist.

Williams’ watercolours ignited a fire of interest in Greece in Scotland and were even put on private display for George IV at Holyrood Palace during his visit to Edinburgh in 1822. After the artist’s death, his widow gifted a large body of his work to the National Gallery of Scotland, where it was placed on near permanent display in the 19th century. His work provided a constant influence for Scottish artists working in the landscape traditional – as well as for historians and architects interested in the study of Greece. Two major watercolours are also in the collection of the Benaki Museum of Greek Culture in Athens, where they are currently on display. Intriguingly, View of Thebes, 1819, was donated to the museum by Sir Steven Runciman (1903-2000), the famous historian of the Byzantine Empire and representative of the British Council in Athens from 1945 to 1947, who lived for the latter part of his life in Scotland.

In a year of celebrations for Greece, it is exciting to know that Scottish art played a role in this history, a role that would not only impact on Western perceptions of Greece, but also on the very identity of Edinburgh as the ‘Athens of the North’ to this day.

You can view works by Hugh William Williams held in the National Gallery of Scotland’s collection here. William Summerfield is a writer and editor based between London and Athens and was the English text editor for forthcoming exhibition '1821: Before and After' at the Benaki Museum, Athens.