How to Home School

Your home school day could begin with a drama lesson, based on Mabel Pryde Nicholson’s The Artist’s Daughter, Nancy, as a Harlequin of about 1910. Pryde was born in Edinburgh in 1871 and met her future husband, the artist William Nicholson, as students at Hubert von Kerkomer’s art school in Bushey, Hertfordshire. They married in 1893 and had four children: Ben, Tony, Nancy and Kit, who became an artist, soldier, designer and architect respectively.

Nancy, then aged about eleven, modelled for this painting. She is wearing a harlequin costume from the family’s dressing‐up box and is seen full length, arms crossed and gazing directly at the viewer. She and her brightly‐patterned outfit stand out against the dark background which her mother favoured. Nicholson often painted her children and was scrupulous to pay them a modelling fee. Children could learn about the humorous ‘Harlequin’ character in the Italian commedia dell’arte, dress up as one using clothes and props around the house and strike a pose like Nancy, if not develop a full comic performance. 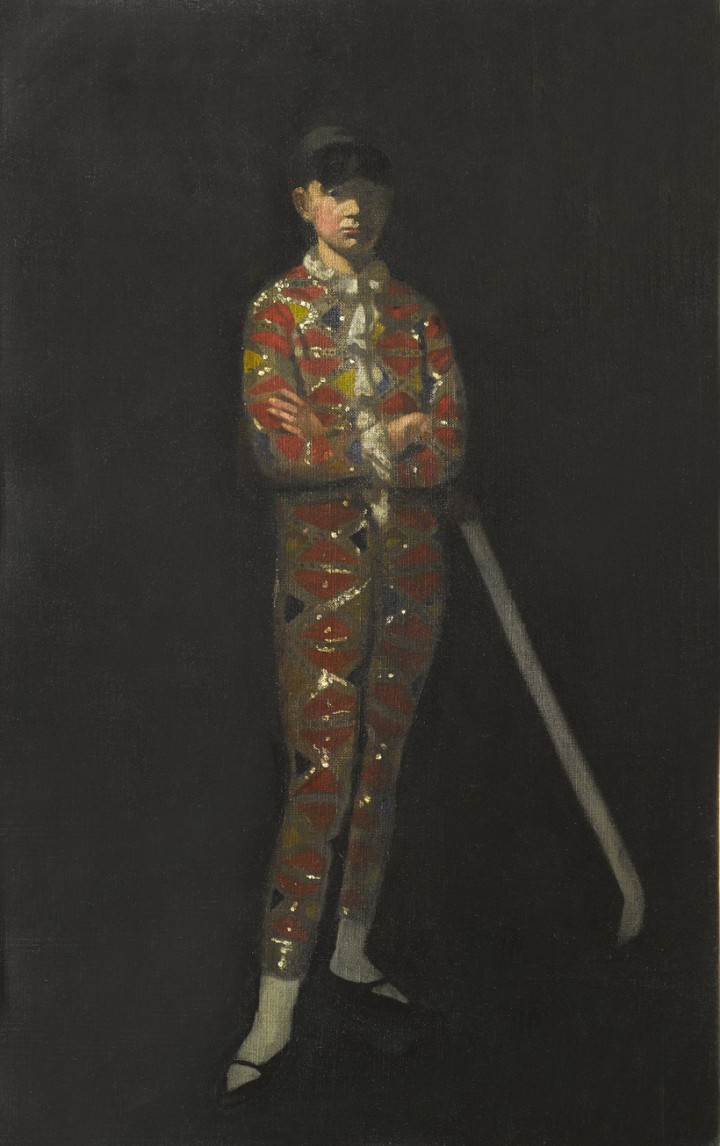 The next lesson could be a test of observation skills and memory, taking its lead from David McClure’s Kim’s Game of about 1975. McClure was born in Lochwinnoch, trained at Edinburgh College of Art and taught at Jordanstone College of Art and Design in Dundee. Kim’s Game involves gathering a selection of objects on a tray. Players are allowed a limited amount of time to look at them before the tray is covered. The players write a list of what they can remember having seen and the winner is the one who remembers the most.

In this painting McClure has assembled a cast of attractive still-life props, from egg cup to feather. Red and yellow ribbons, as well as foliage, curve throughout the presentation and over the edge of the table top. Mixed perspective allows us to see from above and from the side at once, mirroring the movement of the players’ eyes as they swoop over the scene, trying to fix it in their minds. Children could play the game based on McClure’s image first, before creating one themselves, with objects surrounding them at home. 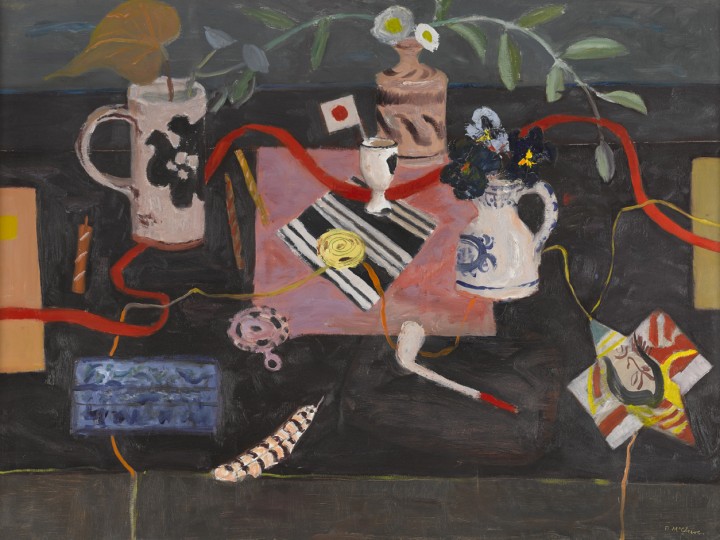 Now could be a good time to go outside, maintain social distancing as required by the UK government’s guidelines. This could be guided by Passing in the Night of 1994 by Margaret Mellis. Born in China, Mellis grew up in Edinburgh and studied at Edinburgh College of Art. Following her move to Southwold on the Suffolk coast in 1976, she began to collect materials she found near her home and washed ashore on local beaches. Described as ‘driftwood constructions’, they combine elements of collage, relief, sculpture and assemblages. The various elements of Passing in the Night are nailed together in an unsophisticated manner, to create an image with references to a sailing boat and a sense of movement. Whilst they are outside, children could gather sticks, stones, leaves and other artefacts with which to make their own ‘Mellis’, in a post-P. E. art lesson.

The home school day could end with ‘own reading’, as seen in Alberto Morrocco’s Boy Reading of 1957. Morrocco was born to Italian parents in Aberdeen and studied at Gray’s School of Art. He was Head of Painting at Duncan of Jordanstone for over thirty years. In this painting a young boy is seen seated at a table, absorbed in a book. One hand supports his head, whilst a finger on the other points to the illustration upon which he is focussed. A partly-seen vase of flowers provides company. Morrocco manipulates space, so that the subtly coloured table-cloth joins the wall in one plane, whilst depth is created by the casting of the chair’s shadow. The atmosphere of calm concentration is a Home School goal we can all dream of!

Alice Strang is a curator of Modern and Contemporary Art.