Gavin Hamilton and the First Principles of early Italian Art 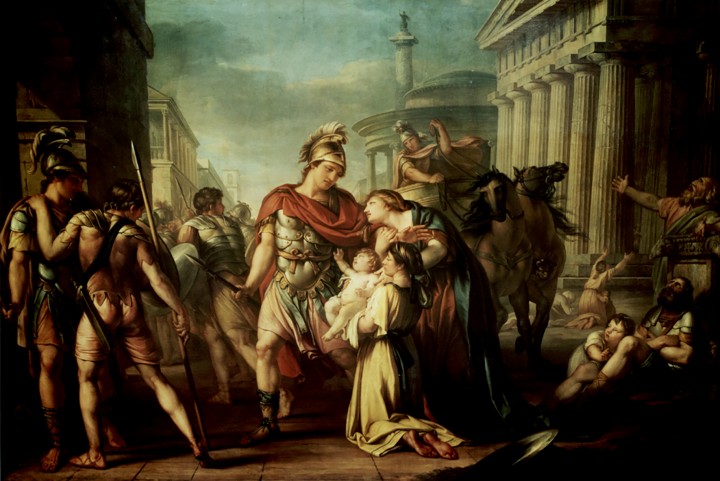 Completed in 1761, Gavin Hamilton’s ‘Andromache Bewailing the Death of Hector’ was the first of six paintings by the artist based on Homer’s Iliad. Each was dependent on a commission. Consequently production was slow, but he always intended that a set of engravings would eventually form a single six-part work. In the end only five were engraved. As a result, they have never been seen as the carefully constructed dramatic unity in the manner of Hogarth’s Progresses that Hamilton planned. Like Hogarth’s Progresses, too, his series had a clear moral intention. He adapted Homer to focus on how Achilles’ savage rage destroyed the gentle love of Hector and Andromache. The moral was that for society to progress beyond barbarism, sympathy had to prevail over the brutal heroic code (Jacques-Louis David’s ‘Oath of the Horatii’ follows Hamilton as closely in this as it follows his ‘Death of Lucretia’ in composition). This reflected the Scottish philosophy of moral sense in which Adam Smith, who had been Hamilton’s fellow student at Glasgow University, argued sympathy was what made society possible.

However, Hamilton’s pictures also reflected the ideas of the Aberdeen scholar Thomas Blackwell set out in An Enquiry into the Life and Writings of Homer published in 1735. Blackwell saw Homer as the bard of a preliterate age when human sensibility was still pure and uncluttered. It was a theory neatly symmetrical with moral sense as Smith argued that sympathy depends on imagination and that in turn depends on sensibility. Adam Ferguson identified the profound shift in taste that the logic of this proposition entailed when he wrote in An Essay on the History of Civil Society (1767): ‘The artless song of the savage, the heroic legend of the bard, have sometimes a magnificent beauty which no change of language can improve and no refinement of the critic reform.’ Robert Wood, a friend whose portrait Hamilton painted, travelled the Aegean to compare landscape and poetry and so prove Blackwell was right: Homer did indeed record the world he knew. Hamilton faced a challenge however: where to find a style to illustrate an age, according to Blackwell, ‘so unaffected and simple . . . that the folds and windings of the human breast lay open to the eye.’ 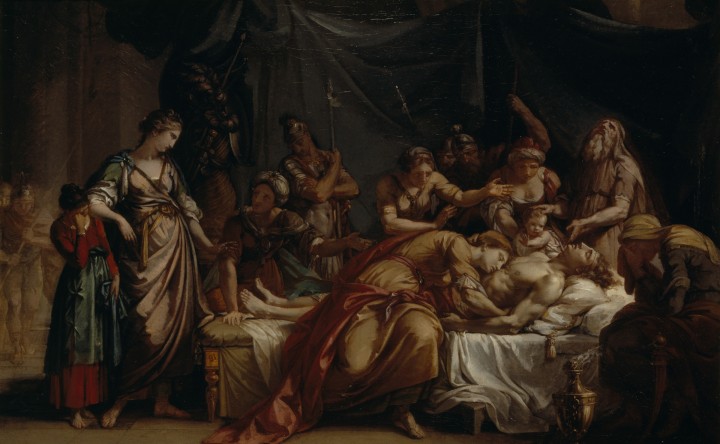 The Abbé Peter Grant described ‘Andromache Bewailing the Death of Hector’ as ‘the best piece of modern painting I have ever seen’. Hamilton’s picture clearly looked novel in spite of its classical vocabulary and we must suppose that its unique style really was intended to match this radical vision of the primitive age of Homer. If so, it was indeed modern and the first of many essays in neo-primitivism in the subsequent history of modern art. It was also exactly contemporary with that more famous essay in this novel mode, the pseudo-archaic language that James MacPherson invented for Ossian. His Fragments of Ancient Poetry' was published in 1760, Fingal in 1762. It is hard to believe that this conjunction of dates was pure coincidence. MacPherson attended Marischal College, Aberdeen, where Thomas Blackwell was principal. Hamilton was at a greater distance, but at Glasgow University, Francis Hutcheson, father of the philosophy of moral sense, had also introduced the study of Greek. Hamilton remained a lifelong student of Homer. As a friend of Robert Wood, new ideas about the bard of preliterate antiquity would not have passed him by.

Blackwell was clear that to emulate Homer, we had to start afresh: ‘Our first business when we set down to poetise in high strains is to unlearn our daily way of life,’ he wrote. Hamilton took his advice. There is very little of the 18th century in his six compositions; with neither baroque diagonals, nor rococo flourishes, space is stable and shallow; the figures relate clearly to the picture plane. Poussin may well have had a part in this, but figure scale, the most striking feature of Hamilton’s compositions, is completely at odds with Poussin’s controlled classicism. Indeed, this and the enormous size of his paintings (approximately three metres by four) could almost have been intended to distance him from Poussin. Here, however, Hamilton does follow the Earl of Shaftesbury who, in his imagined painting of The Judgement of Hercules, recommends the figures should be ‘as big, or bigger than the common Life; the subject being of the Heroick kind, and requiring rather such figures as should appear above ordinary human stature.’ 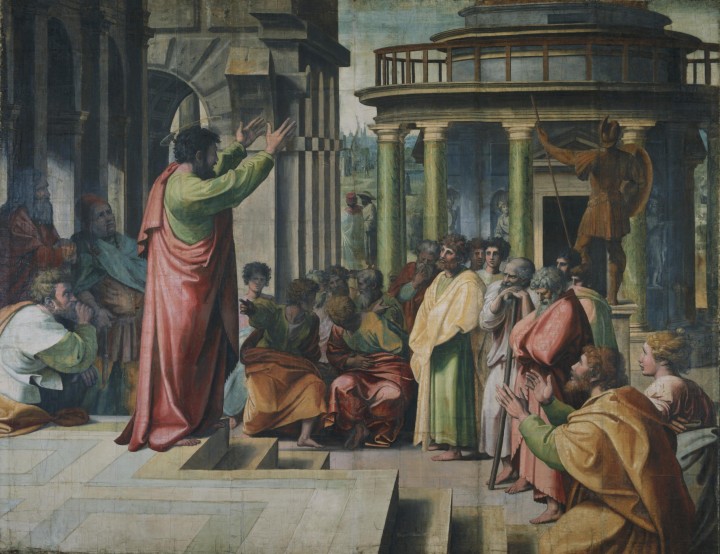 Hamilton’s initial stimulus for a new kind of history painting may have been Hogarth’s ‘Paul before Felix’ which had been installed at Lincoln’s Inn in London just before he returned from Rome in 1750. Like Hogarth, too, he certainly looked closely at the Raphael tapestry cartoons. His pictures are near, both in size and proportion, to the three smallest of them. Excepting a notable Greek Doric temple, the town in the background of ‘Hector’s Farewell to Andromache’ is also clearly a variation on the city in Raphael’s ‘Paul Preaching at Athens’.

Nevertheless, Hamilton’s pictures are not really Raphaelesque and, indeed, he himself directs us to look elsewhere for his inspiration. Years later, according to Canova’s biographer, Melchior Missirini, Hamilton advised the young Canova to look at the work of Nicola Pisano, Ghiberti and Jacopo della Quercia. In his relief of the ‘Death of Priam’, Canova showed that he did indeed look at Nicola Pisano and the influence of the Quattrocento (the 15th century in Italian culture) is also clear throughout his work — consider the relationship of his ‘Three Graces’ to Botticelli’s ‘Primavera’, for instance. Hamilton, however, went on to tell Canova that, in art, Nicola Pisano had brought about ‘un maraviglioso miglioramento’ — ‘a wonderful improvement.’ He had evidently already also passed on this remarkable insight to other young artists. Alexander Runciman and James Barry were friends and disciples of Hamilton in
Rome and both clearly quote from Nicola Pisano’s Pisa pulpit – Runciman in ‘The Death of Oscar’ for Penicuik House and Barry in ‘King Lear’.

If Hamilton advised Runciman, Barry and Canova to look at Nicola Pisano, why should he not have followed his own advice? And it seems he did. There are figures in his Homer pictures which suggest he had looked closely at his work. A heavily bearded man to the right of the crucifixion on the Pisa pulpit is echoed in a similarly bearded man to the right of ‘Andromache Bewailing the Death of Hector’. In ‘Priam Pleading before Achilles’, too, the kneeling, almost prostrate figure of Priam is very close to a kneeling king in the ‘Adoration of the Magi’ on Pisano’s pulpit in Siena. 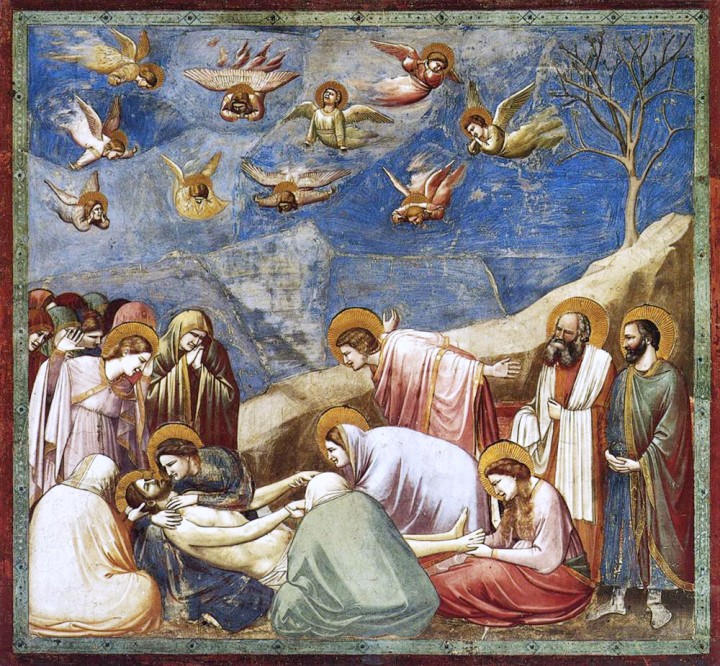 Hamilton’s monumental canvases, though, are quite unlike Nicola Pisano’s crowded compositions. They are, however, in several rather striking ways similar to Giotto’s frescoes in the Scrovegni – or Arena – Chapel in Padua. He must have seen the chapel. In 1750, returning to Britain, he travelled to Venice. On the homeward journey, he was bound to pass through Padua. If he had the insight to recognise the importance of Nicola Pisano, he would hardly have passed by such an important monument of the early Renaissance. Giotto’s frescoes are immensely impressive and, adapting Blackwell on the age of Homer, you could say they are ‘so unaffected and simple . . . that the folds and windings of the human breast lie open to the eye’. Correspondingly, they are utterly unlike anything fashionable in the 18th century. Notably too, they are organised in lucid ranges of six equal scenes. Seeing their austere beauty might have been a eureka moment for Hamilton and it was perhaps Giotto more than Hogarth who, as a friend reported a year later in London, led him to neglect the portraits that were supposed to be his living ‘to dream, instead, of fine pictures.’ He returned to Rome to carry out his dream in 1756.

Hamilton’s figures are simplified and massive, more as Giotto’s are than anything from the High Renaissance. Like Giotto’s too, their volume is suggested by simple draperies. Nothing flutters. The figures are separate and dominate their setting. Where that is landscape, it is schematic as in Giotto. In contrast to the restless movements of the baroque, the figures are static. Rhetorical gestures indicate their place in the narrative clearly and simply just as they do in Giotto’s frescoes. Though it is reversed, a comparison of ‘Andromache Bewailing the Death of Hector’ with Giotto’s ‘Lamentation’ in the Arena Chapel might bear witness to this connection. In the fresco there is a seated figure at Christ’s head as there is by Hector’s head in Hamilton’s picture. In a curious detail, too, a figure leaning over Christ’s body isolates his feet in Giotto’s work. Andromache isolates Hector’s in just the same way in Hamilton’s painting. This also happens in Poussin’s second ‘Extreme Unction’, and it has often been remarked how Hamilton’s picture resembles Poussin’s, though again reversed, but Poussin mitigates this odd effect with shadow. As she kisses Hector, Andromache’s action also combines the figure leaning over Christ with her back to us with the head of the woman embracing him. Both compositions are also closed by standing figures.

Giotto is so seminal to all that followed that it would be impossible fully to isolate his influence on Hamilton. Hamilton did, however, have the authority of both Vasari and GP Bellori to return to first principles. Vasari’s idea of the Renaissance has shaped all art history, but later, in Le vite de’ pittori, scultori et architetti moderni, published in 1672, Bellori restated the idea in a modern context. In his life of Annibale Carracci, he describes how with the birth of Annibale, art that was ‘fallen and nearly extinct’ (‘caduta e quasi estinta’) rose again. Hamilton’s rejection of the baroque, then universal in history painting, was as complete as Annibale’s rejection of mannerism. Hamilton certainly admired Giudo Reni, Domenichino and Poussin, all part of this second renaissance, but if he was planning his own new renaissance, he had the authority of Vasari also to look much further back to the earliest pioneers of the first. That is what he seems to have done and indeed, in his history of the Accademia di San Luca, Melchior Missirini, in words that echo Bellori’s, attributes to Hamilton just such a new renaissance. ‘About the middle of the last century,’ he writes, ‘through Gavino (Hamilton) . . . and his sublime invention (‘la sublmità dell’invenzione’) . . . painting was restored’ (‘la pittura si ristorasse’).

In 1761, Hamilton’s painting began the seismic changes from which modern art eventually evolved, for what his young disciples learnt from him was to go back to first principles. Barry, Runciman and Canova followed his advice to look at Nicola Pisano at the dawn of the Renaissance. Thereafter they, together with others from Hamilton’s circle – Tobias Sergel, Henry Fuseli, John Brown, Jacques-Louis David and later, amongst others following their example, John Flaxman, William Blake in Britain, JD Ingres and Paul Duqueylar in France, (the latter associated with a group called Les Primitifs) – all sought to create a new, primitive art. Publication of the catalogue of
Sir William Hamilton’s collection of Greek vases offered a new model of primitive simplicity — they were believed to survive from the age of Homer. Nevertheless, it seems the artists closest to Gavin Hamilton first followed his advice to look at the artists known as the Italian Primitives. Notably too, William Roscoe, the first significant collector of Italian Primitives in Britain, was a friend and patron of Henry Fuseli. The idea of this pre-Raphaelite inspiration endured through Blake and the Nazarenes to the Pre- Raphaelites themselves. More importantly though, a return to first principles remained the driving idea of modern art down to the 20th century.

Duncan Macmillan is a Professor Emeritus at the University of Edinburgh, an art critic and art historian