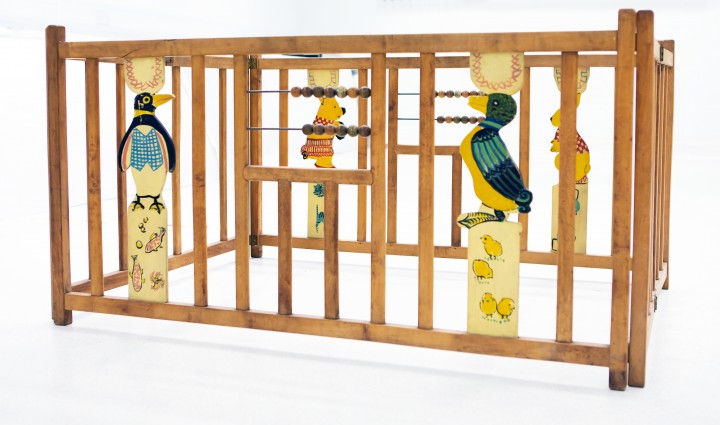 Taking a playpen painted by Joan Eardley in Paisley Museum’s collection as a starting point, Victoria Irvine and Catriona McAra explore the artist’s often overlooked personal projects and their influences, offering us new insights and understanding into Eardley’s wider practice.

Victoria Irvine (VI): Paisley Museum houses a playpen decorated by Joan Eardley in the late 1940s. We know of one other playpen and both were painted for family or friends. These objects have been excluded from Eardley’s output, yet I feel that outright dismissal precludes wider conversations about her interest in childhood culture and these personal projects.

Catriona McAra (CM): This playpen is fascinating and surely provides crucial insights into understandings of Eardley’s broader world view. The high art/low art dichotomy was still very prevalent when this was made but that was all about to change. Art historical thinking on craft has been revised significantly since then, and maybe we need to further revise considerations of Eardley’s output using contemporary feminist language.

VI: Feminist readings of Eardley’s contemporary reviews indicate the gendered language she was subject to, admired for her ‘virility’ and mastery of paint. This language in part accorded Eardley status because it united, to paraphrase feminist art historian Griselda Pollock, creativity with stereotypically masculine qualities.[1] I am intrigued by your idea that we can use contemporary feminist language to provide a more nuanced reading of her work as it relates to childhood. How might we begin that discussion?

CM: I am interested in art by women in the immediate post-war era and how they might provide a model for a work/life balance. The English artist Leonora Carrington (1917–2011) made a series of night nursery paintings in Mexico City, and even collaborated on a boat-shaped cradle with José Horna in 1949. The boat, for them, was symbolic of wartime exile, and is painted with moons and creatures that likely owe their allegiance to the picture-book illustrations of Carrington's own childhood Edwardian nursery, e.g. Arthur Rackham and Beatrix Potter.[2] Did Eardley have an interest in this so-called ‘golden age’ of picture-books or even a collection of her own? 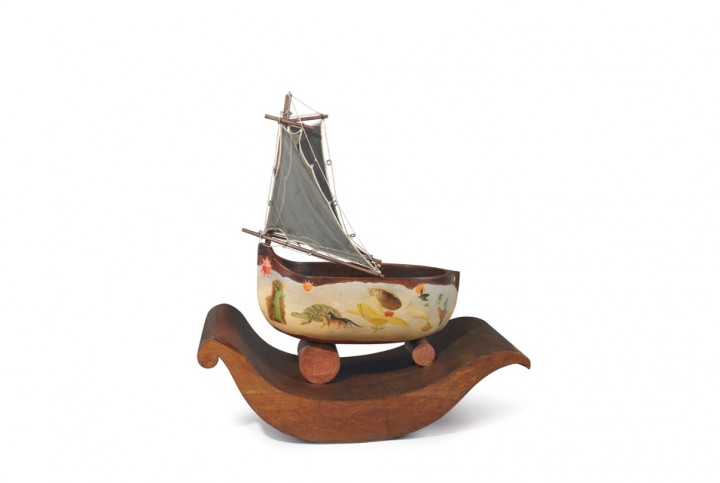 VI: I’m glad you raised the post-war environment when materials were scarce and imagery had newfound significance. Eardley read 1920s editions of Beatrix Potter, Peter Pan, Alice in Wonderland and so forth. Eardley’s niece, Anne Morrison-Hudson, also read the same copies as a child and we can clearly see that Eardley was inspired by Beatrix Potter’s illustrations for the Eardley family playpen (in the form of Tabitha Twitchit and Jemima Puddle-Duck). Prior to painting both playpens we know that Eardley made and illustrated a book of nursery rhymes in 1940, exhibited at the Glasgow School of Art Club Show when she was a student there. Do the moons and creatures of Carrington’s cradle further symbolise an escape signified by childhood?

CM: Carrington’s nocturnal creatures and moons could be said to relate to the tradition of the night nursery and soothing post-war lullabies like Margaret Wise Brown’s Goodnight Moon (1947). Meanwhile, Walt Disney signified that story-time was about to begin with a big, heavy, gilt-edged tome being opened in feature length animations. Carrington also had a reproduction of Margaret Winifred Tarrant’s The Gates of Fairyland (c.1922) where the children serve as the link between reality and the enchanted characters of storyland. I’m curious that the illustrators Carrington and Eardley relate to should be mostly women. Tell me more about Eardley’s illustrated book, what nursery rhymes did it contain? Are book and playpen one-off projects or did she do further commissions like this alongside her painting practice?

VI: This tantalising reference to Eardley’s illustrated book came from a fellow student, Christine Shaw[3] and unfortunately the book is now lost so we are only able to speculate as to its contents. As far as the Eardley family are aware, the book and playpens were one-off projects although childhood – in some form – featured in Eardley’s early work. As for wider cultural context, Fiona Pearson’s work[4] on Eardley has already identified that the artist was painting in the era of Iona and Peter Opie who studied children’s folklore (the recording of nursery stories and children’s street games). Eardley also read the Picture Post which has been cited as significant in terms of its 1948 article ‘The Forgotten Gorbals’ which featured photographs of children by Bert Hardy (1913–1995) and Bill Brandt (1904–1983).

CM: How interesting that Eardley worked from such diverse sources, from picture-book illustration to documentary photography, yet both with a focus on childhood subjects and perspectives. This seems singly unique in mid-20th century painting. Does her use of such photographic subjects in her painting shed further light on her nascent feminism and/or feminist readings of her work? 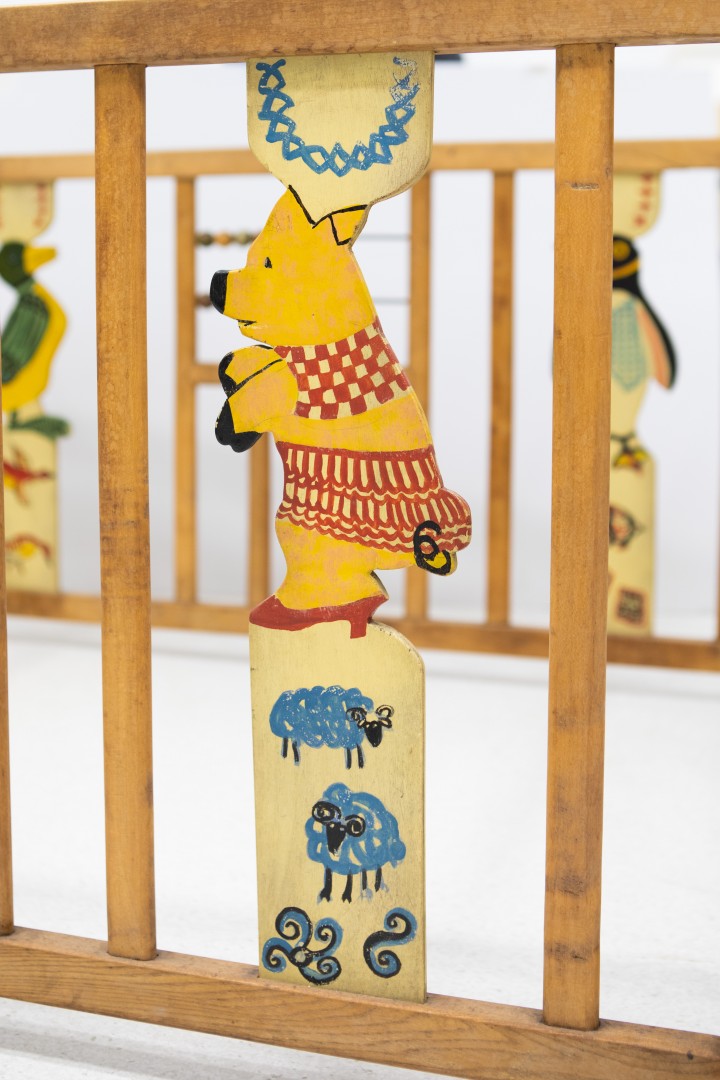 VI: Eardley’s association with photography is well-documented and her understanding of Glasgow as a place were people and city were wholly connected relies partly on the heritage of documentary photography. Eardley carried a camera with her from 1953 and used documentary images of graffiti, child’s clothes, etc, as more than an aide-memoire. Cordelia Oliver refers to Eardley’s sketches and photographs as a kind of visual feeding[5], which I like. The language around photography and Eardley has not been examined in terms of feminism which is surprising given contemporary feminist practitioners in the field. Something which interests me: Sara Stevenson referred to the juxtaposition of realism and surreality[6] in Eardley’s photographs (photographic distortion of a real person for example). This dichotomy seems present in Eardley’s work in general; social realism and abstract expressionism, and chimes with this conversation in terms of reality and storybook illustrations.

CM: She was obviously highly sensitive and alert to the cultural ephemera and social landscape around her, combining these different aspects, almost collage-like, into her innovative painterly practice. So, in sum, what does it mean, I wonder, for a pioneering woman, pursuing an aesthetically advanced creative practice, to work on a craft-based side-project at that historical moment? And finally, can we understand Eardley better through exploring her use of childhood motifs?

VI: It means that we should continually remind ourselves to adjust the prism through which we view the work of women artists. The playpens were personal projects, yet this does not mean they are less historically significant than her finest oils. I think you said it earlier – the narrative between domestic and amateur, craft or ‘less than’, has existed since the 19th century and is historically implicit in the work of women artists. Both playpens speak more broadly to Eardley’s visual bank of sources and her interest in children, and as you have demonstrated, show that we can start to contextualise Eardley’s output with nuance rather than thinking of her within traditional art historical canons. What of her women colleagues like Dorothy Steel (1927–2002) and Margot Sandeman (1922–2009)? What of her women peers in the UK and internationally? And which other women were then working on child subjects? More generally I believe that the playpens and references to picture-books reinforce that Eardley was a storyteller above all, as she herself said, ‘the story part of it does matter’.[7]

Victoria Irvine is Curator at Paisley Museum. Catriona McAra is Assistant Director of Heritage Collections and Curation at the University of St Andrews.

This conversation was first delivered at the Hunterian’s Joan Eardley: The Centenary Celebration event on 18 May 2021.