Articulating Identities: A Conversation between Jamie Crewe and Tako Taal

Jamie Crewe and Tako Taal are Glasgow-based artists and filmmakers exploring the complexities of identity and self-expression, including from trans and racialised perspectives.

When Jamie was selected as one of 30 artist-nominators for Survey II, a touring exhibition organised by Jerwood Arts to present new work from outstanding early-career UK-based artists, she nominated Taal, whose resulting 16mm film, Departures, will go on display at g39 in Cardiff on 3rd July before travelling to London and Sheffield. Taal is also co-programmer for this year’s Lux Scotland Artist Moving Image Festival.

Greg Thomas brought Jamie and Tako together to talk about the use of distance and intimacy in their work, and articulation as a form of protection.

JC:  There’s a bit in Voices in the Evening (1961) by Natalia Ginzburg which has always stuck with me. It’s a novel set in a small Italian village during the rise of fascism, and at one point the character Old Balotta is talking with his sister Magna Maria, who tells him that his friend has been killed by the fascists. The novel is almost gossipy, very dry, and the detail of the murder is passed over quickly – “[i]t was at night and we heard him cry out. And in the morning our woman found his scarf, and his spectacles all broken” – to a description of the landscape: “the sloping rocks behind the house...the clumps of pine trees which cover that side of the hill.” I find it very touching that at that moment of the most piercing pain, the novel takes you further and further from the emotion. I think a lot about distance in your work too: the way that something incredibly intimate and deeply felt can be processed through distancing devices.

TT: People have said that there are these layers of removal in my practice, and what you describe is certainly there, perhaps at the most basic level as a kind of coping mechanism. It’s interesting because at first, I didn’t notice. It was just a way of being able to get close to the pain or rupture or a moment of intense emotion without it becoming overwhelming. Now I think I’m trying to move away from a distanced approach to loss or trauma, and almost to sit in these feelings. In particular I have been thinking about the unruly, disruptive nature of sadness. It’s something that can be quite powerful. It can cause you to reflect on the thing that created that emotion, but sometimes it can happen at times that are quite unexpected.

JC: Yes, I’ve been thinking recently about the idea of the rudder of tears. There’s been times when I’ve had really intense emotional reactions to things without being able to map out what’s happening. Perhaps there’s something valuable about exploring that kind of un-strategised emotional reaction, to think: what is moving through my body here, at a level that’s not quite accessible? So maybe we both think about distance and intimacy in our work. We’ve had conversations where we talk about when to open themes up more directly, when to close things down, how to modulate openness and protectiveness. That is partly why I nominated you for the Survey II show, because I think there are some things we share.

TT: Yeah, the idea of protection is something that I think about a lot, and maybe an idea of distance comes in again there. Most of my work is about my family. My father from the Gambia died when I was very young, and lot of my work is about trying to form some connection with something that is no longer there, through other things: objects, photographs, conversations. But a lot of what I draw on, it’s not exactly mine to share, so I always feel this need to protect the sources. These are not always things that people in my family want to talk about. 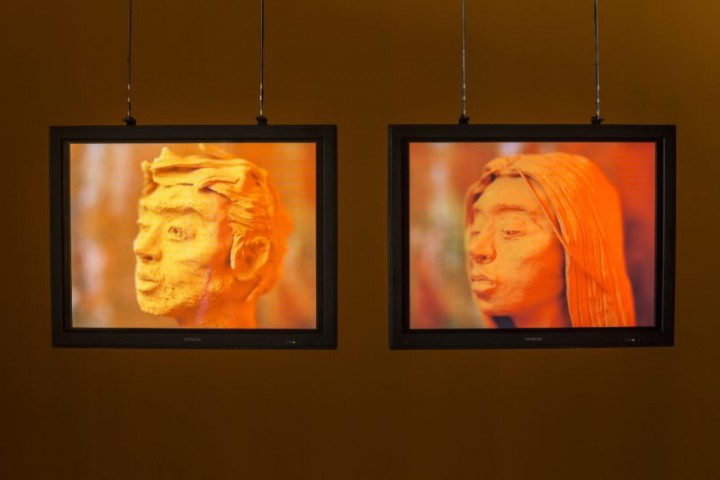 JC: Lately I’ve been coming back to my film Pastoral Drama (2018) [based on Agostino Agazzari’s 1606 operatic interlude Eumelio, modelled on the Greek myth of Eurydice], where the way I responded to those concerns about ethical stewardship was not to show anybody: to make a film with substitutes for bodies, little drawings or plasticine figures, almost like homunculi.

GT: On a similar theme, you sent me an email last year where you were thinking about the idea of articulation, meaning both to speak and to link, but also having bodily connotations: the skeleton as articulating the body. You were talking about articulated crustaceans, the earliest post-amoeba life forms, the first to be called “articulated,” but which had exoskeletons, casings or shells, rather than skeletons. There was a really beautiful small constellation of thoughts there about articulation being something that protects softness.

TT: Yeah, I hadn’t previously thought about articulation as a process of literally covering something, almost like clothing. Something I think about a lot is a comment the artist John Akomfrah made during a residency in Dakar. He talked about film as a “garment of contingency,” and I’m interested in that idea of using whatever objects and motifs are around you at a particular moment to express something that is intimate and vulnerable, to cover what is soft and fleshy.

JC: That makes me think about your work for Survey II, Departures (2021), which is a 16mm film primarily showing a fabric, exploring the pattern and the rhythm of this fabric. Then in the final moment the fabric drops to reveal someone’s shoulders. Talking about covering makes me think of that moment. Could you talk a little bit about the work?

TT: I think it’s the most succinct piece I’ve made—in some ways I’m a bit worried about it! There are only three elements. First you have the fabric, which I’ve had since my birth. It’s a naming ceremony blanket that is given when I child is born. It’s traditional in the Gambia, in Mandinka cultures. It’s been carried with me, always on the back of a chair, or on the bed, or hung up, in the various homes that I’ve had, and I’ve always thought about using it in a work. Then the voices that you hear are of two of my uncles, one who lives in the Gambia, in Jufureh, and the other who lives in Florida. He moved there when he was 18, so has spent his entire life there, and in that sense was quite estranged. And the third element is a text that my father wrote [laughs], which he titled his “memoirs.” It’s a collection of poems, essentially, and one of them is called “Departure,” which forms the basis of a text that is read out.

GT: I was interested, by the way, in the way you used a literary text to introduce the discussion earlier. That’s something I find fascinating about your practice, that you often work from literary sources.

JC: Yeah, it’s partly because I’m enthusiastic about other people’s work in general, but actually I generally don’t make work about stuff I like. It’s often when I have mixed feelings about something, when there’s this sense of entanglement, that I get excited. The references I work with are by and large from the history of queer culture, which feels like the lineage that has formed me, or set the terms by which I can articulate myself. I made something about André Gide’s Corydon (1924), which is a book defending male homosexuality, which is also deeply misogynistic. That’s the kind of thing that makes me want to make work, as much as anything to just say: fuck you!  It’s maybe about not having a full set of tools for understanding yourself or your position. You only have these bits and pieces and this compromised set of ancestors or progenitors. To find the space for yourself or people like you, you need to look in the weird nooks and crannies between these cultural edifices.

Edited from a longer discussion on 21 June 2021 by Greg Thomas.

Survey II will be showing at g39 in Cardiff from 3 July to 11 September, then at Jerwood Arts, London from 1 October to 11 December, and at Site Gallery, Sheffield from 5 March to 15 May 2022.