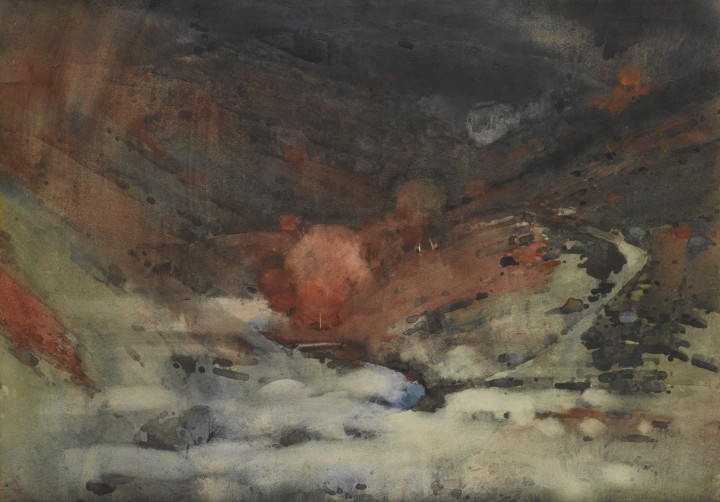 When Arthur Melville died in 1904, the Forfarshire born artist left behind a life as rich in incident and colour as that in his paintings, several of which are held as part of the Fleming Collection. The Scottish National Gallery in Edinburgh highlighted Melville’s importance as an artist in 2015 and 2016 with the tellingly named exhibition, Arthur Melville: Adventures in Colour.

In death too, it seems, Melville’s legacy continues, as a plan to restore his desecrated grave in rural Surrey in South East England runs on apace. This follows the discovery of a broken headstone for Melville’s grave by Jon Leech of the Brookwood Cemetery Society, the voluntary body which, with full support from the surviving members of Melville’s family and various collectors of his work, has restored the grave to its former glory.

Melville’s grave isn’t in Brookwood Cemetery itself, but, as explained by BCS founding member John M. Clarke in his book, London’s Necropolis – A Guide to Brookwood Cemetery, is situated on a piece of purple heather covered land sold in 1979 by the then owners of the cemetery, Woking Council. While other graves ‘on the heath’ were exhumed and reinterred within the cemetery, for some reason Melville’s grave was left behind. While the causes of the damage to the gravestone aren’t known, up until now, Melville’s grave has been pretty much hidden since the 1970s. As Clarke wrote, this left it ‘in splendid isolation’.

At time of writing, stonemasons have repaired the headstone, which has been reinstated alongside the grave. With a re-dedication ceremony mooted for Spring 2023, as Leech puts it, the headstone “again sits in ‘perfect isolation’ in the heathland outside of the main cemetery amongst the purple heather. We are soon to prepare the signage to explain the grave to the many dog owners and casual walkers who will now discover it for the first time, and thus learn about Arthur Melville and his art.”

Donations to the Brookwood Cemetery Society can be made at www.tbcs.org.uk.