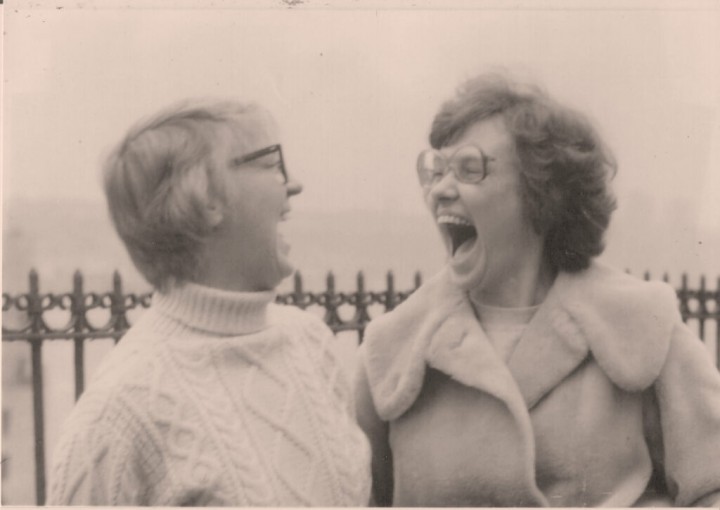 The sound of laughter is what strikes you first in For Ruth, the nine and a half minute sound work composed by Annea Lockwood. As the flagship piece for the 80-something New Zealand born composer’s tenure as featured artist in this year’s online edition of Counterflows, the annual Glasgow-based showcase of free thinking music, the laughter is infectious.

The laughter too is the unselfconscious kind that erupts uncontrollably when two people find boundless, all encompassing joy in and with each other. The birdsong, sounds of lapping water and more ethereal echoes that filter through between add a filter of sense memory to such intimate exchanges.

For Ruth is drawn from recordings of telephone conversations between Lockwood and her late wife, fellow composer and kindred spirit of more than four decades, Ruth Anderson. The calls took place shortly after the couple first met in 1973, during the first giddy flush of what was initially a long-distance romance.

Anderson made the original recordings into her own eighteen and a half minute work, Conversations. This squished together the couple’s assorted hellos, goodbyes and everything in-between with wonky piano versions of old showtunes. Anderson gifted her construction to Lockwood shortly after they got together, and until now the recording has never been heard in public.

Since Anderson’s passing in 2019, Lockwood has pieced together fragments of their recorded conversations with new field recordings made in the couple’s special places in the New Hampshire Village of Hancock. The result in For Ruth is a moving call and response that speaks across almost half a century.

Part elegy, part love letter, For Ruth is a culmination of sorts of a lifetime of sonic poetry produced by Lockwood, be it breaking glass at 1960s London Happenings, burning pianos, or sound-mapping rivers. Such actions are contrary lines of inquiry that are both ritualistically meditative and playfully inquisitive. With For Ruth, Lockwood has come home to roost with a deeply personal work that shares her most private moments in an emotional and joyous fashion.

For Counterflows, it is the sound too of the mother of invention taking full advantage of necessity. As with other live events curtailed by the ongoing Covid-19 pandemic, Counterflows co-producers AC Projects and OtoProjects have been forced to embrace digital platforms. Rather than stifling things, such restrictions have become a liberating force.

By bringing the global village into people’s living rooms, Counterflows has actually increased the festival’s accessibility. This is the case both in the geographical range of artists who can gather in a virtual space, and in the festival’s potential international audience. A lucky thirteen works have been commissioned from artists including Edward George, and Nazar, both from Angola, Yan Jun from China, and Nakul Krishnamurthy from India. From closer to home, Glasgow based artists include Quinie, TheFuries, and Helena Celle. Beyond music, the Counterflows at Home programme includes films, podcasts, writing and conversations. All these are available for free and archived presumably for eternity, or at least until the world is rebooted.

All of which has made for a different kind of shared experience. Lockwood and For Ruth, for instance, is accompanied by Annea Lockwood / A Film About Listening, a new short film portrait of Lockwood made by Sam Green, whose own playful spirit mirrors Lockwood’s.

This also allows listeners to witness For Ruth and Conversations as they nestle side by side. Being able to tune in to both works reveals how much the conversation between Lockwood and Anderson is still ongoing. The laughter too lives on, reverberating with their endless love.

Watch and listen to Counterflows at Home from 1st to 30th April and tune in to For Ruth.