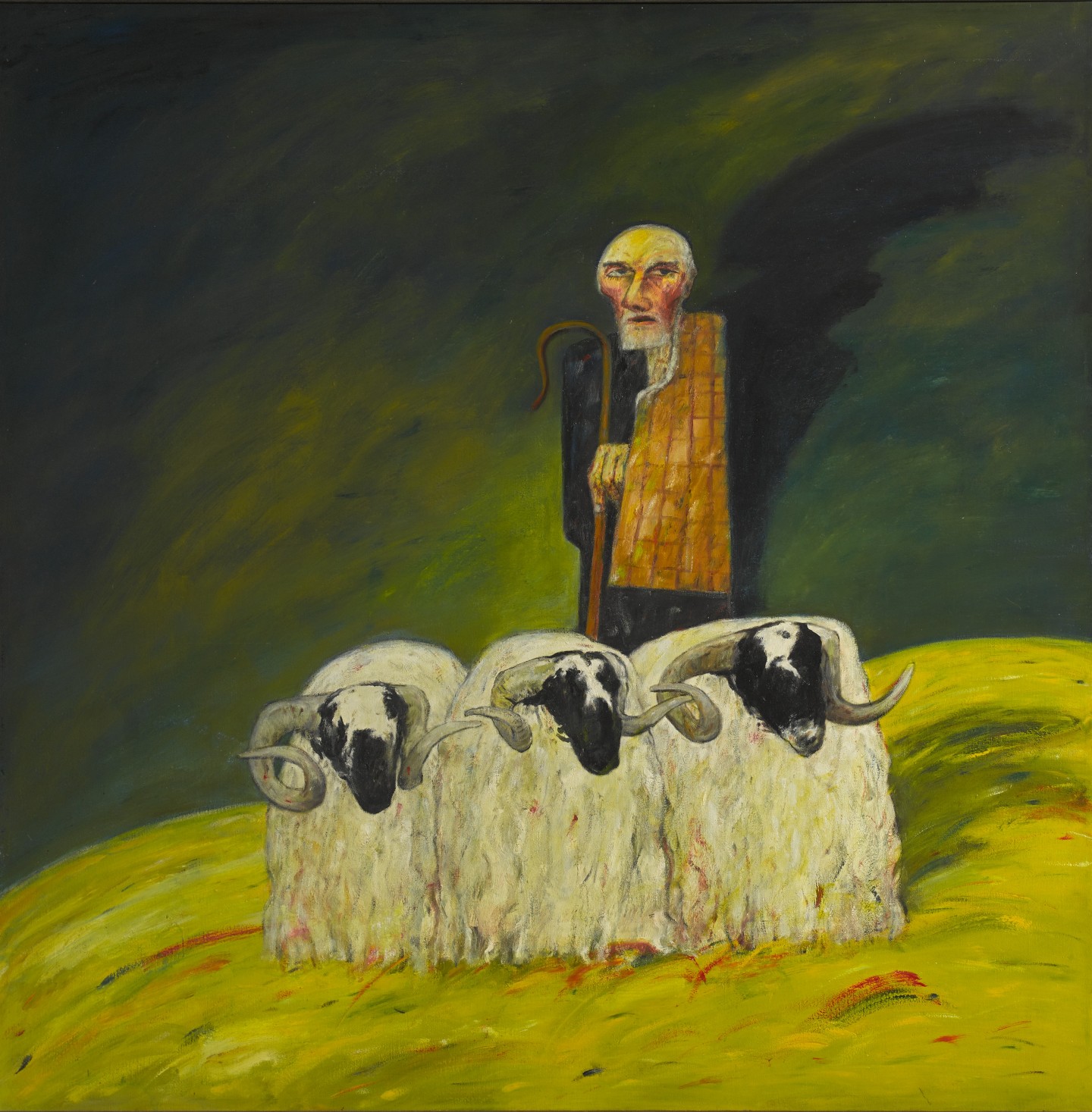 Born in Port Seton, Bellany came from a family of fisherfolk. He studied at Edinburgh College of Art and the Royal College of Art. Travelling on a cultural exchange to East Germany in 1967, while still at ECA, Bellany visited Buchenwald concentration camp. His response was a series of majestic paintings of which The Ettrick Shepherd is one, addressing the bleakness of the human condition. Bellany’s choice of subject is James Hogg, the renowned 19th century writer-shepherd, which resonates with man’s time honoured responsibility (or not) for pastoral care. In the context of the Clearances, Hogg, as a shepherd, was a minor cog in the agricultural reforms which contributed to the ending of traditional highland life. The influence of pre-war German painters, Max Beckmann and Otto Dix, pervades this work. Bellany went to become a great, late expressionist in the European tradition.

Bellany trained at Edinburgh College of Art under Robin Philipson from 1960 to 1965. Awarded travelling scholarships, he visited Paris in 1962 and The Netherlands and Belgium in 1965. However, he turned away from the Edinburgh tradition of belle peinture, feeling that subject-matter should be of more consequence than the fashionable landscapes and still lifes of the Edinburgh School - it should address the human condition. He decided to go to London, enrolling at the Royal College of Art, where he studied under Carel Wright and Peter de Francia.

Bellany long admired the Old Masters, including such North European artists such as Bosch, Bruegel and Steen. In London he 'discovered' Max Beckman and Picasso. In 1967 he travelled to East Germany on an official cultural mission, and a visit to the site of Buchenwald concentration camp made a deep impression on him. By 1970 his painting had shifted from the representation of the fishing community to an intense self-analysis, concerned with such issues as life, death, sexuality and guilt. Bellany's work of the early 1980s is more overtly biographical than previously, as well as wilder and more aggressive, approaching abstraction. By 1984 his health was deteriorating, and in 1988 he underwent a life-saving liver transplant. With the aid of a mirror he produced a remarkable series of watercolour studies of himself, starting almost from the moment of his emergence from the anaesthetic.