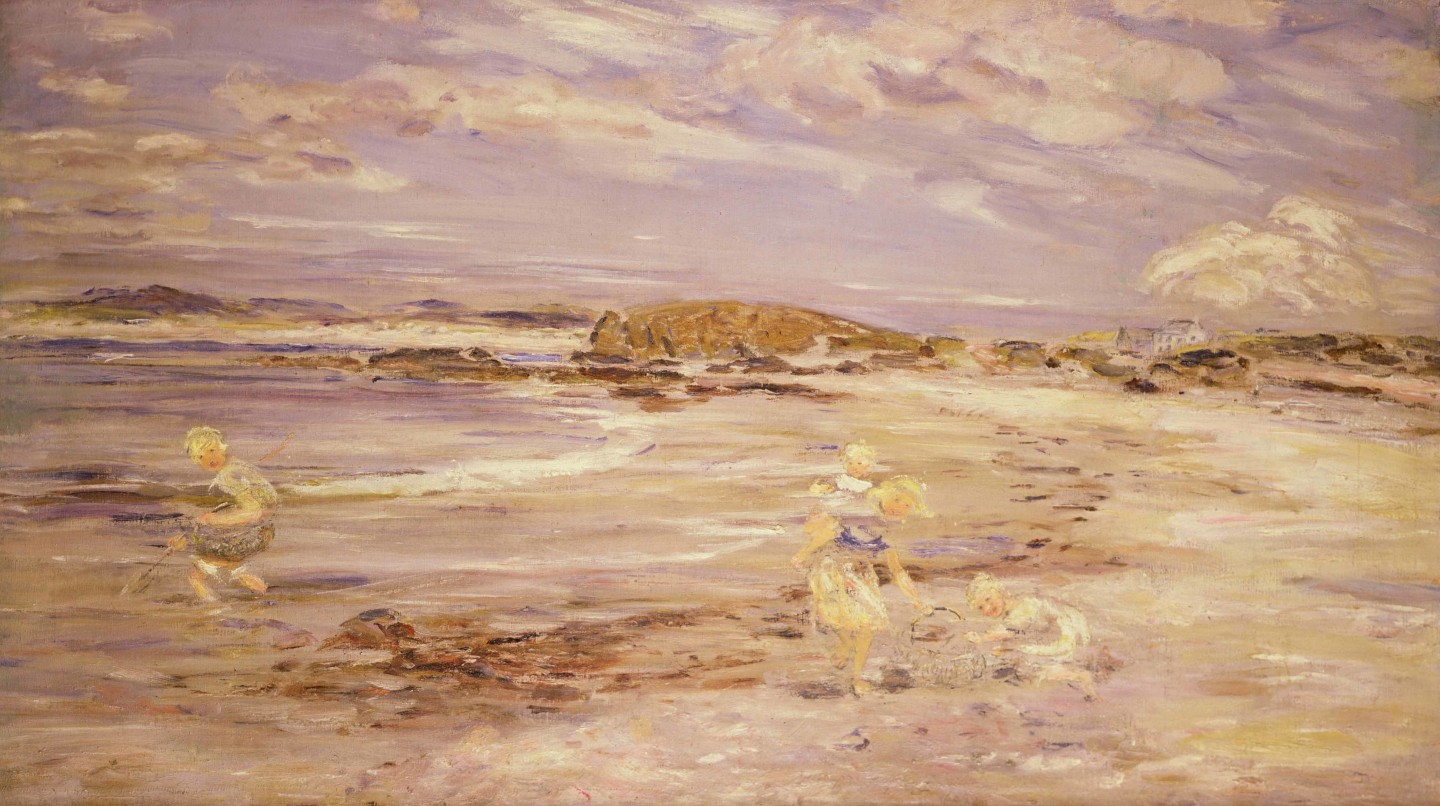 McTaggart soon abandoned the careful drawing and refined finish of his early, largely anecdotal paintings. The 1870s and 1880s were a time of exploration, as he experimented with light, colour and brushwork in his search for greater truth and depth of expression. In his earlier work the figures dominate the landscape, but in later paintings the figures are subordinate to the land or seascape. This can be clearly seen in Bay Voyach, Summer Time, probably started at Machrihanish in 1892 and completed in the studio two years later. The children are transparent or ghostlike, dissolving into their surroundings, a feature McTaggart employed in much of his later work. Frequently he painted the landscape first and then added the figures so that the underlying paint showed through. By this means he attempted both to capture movement and to integrate the figures with their environment.

McTaggart is probably the most outstanding and innovative landscape painter Scotland has produced, and has been an important influence on successive generations of Scottish painters. In a career spanning over half a century he displayed an exceptional pattern of consistent development. His early work was influenced by the Pre-Raphaelites, but gradually his technique became looser and he developed his own version of Impressionism. His later work bordered on expressionism. Unlike most of his contemporaries McTaggart did not move to London but spent almost his entire life painting in Scotland. He lived in Edinburgh until 1889, when he moved to Broomieknowe, then in the countryside to the south of the city.

He was born in Aros, Kintyre, the son of an impoverished crofter. When he was twelve he was apprenticed to a Campbeltown apothecary, who recognised his natural talent for drawing and introduced him to the Glasgow painter Daniel Macnee. The latter advised McTaggart to enrol at the Trustees' Academy in Edinburgh, which had just appointed Robert Scott Lauder as its co-director, where his fellow students included Hugh Cameron, George Chalmers, Tom Graham and John Pettie. At the academy McTaggart won several prizes for drawing. Although classes were free, he supported himself by accepting portrait commissions, both while a student and later when he married and had a large family. However, as soon as he felt financially secure he concentrated on landscape and seascape, limiting portraiture as much as he could to family and close friends.