Will Maclean: Points of Departure

Ripples of an island life by the sea course throughout this large-scale gathering of work created by Will Maclean over the last half century. Throughout that time, the Inverness born artist has drawn consistently if not exclusively from his own roots as both a midshipman and a fisherman.

This is evident from the earliest works on show across two floors of the City Art Centre in Edinburgh, as much as it is in the various suites of work that followed more recently. The tools of Maclean’s former trade too are there from the off, hung in cupboards like monuments to the intricate artistry of ancient everyday crafts.

Along the way there are memorials, commemorations and visual poems that brood with the mysteries of the lower depths. Maclean has brought these to the surface and arranged them to create something that at times invokes a perilous essence of the natural world. If the word ‘museum’ pops up in some of the evocative titles Maclean adorns his work with, rather than signalling some kind of ossified relic, it creates its mythology as part of a living tradition.

Points of Departure is something of a whopper. The Ring Net (1973-78) alone is a compendium of more than 350 items gathered to evoke the intricate craft of ring-netting - a method of herring fishing Maclean practiced during his time as a fisherman. A forensic panoply of photographs and plans are mounted on the wall like some historical detective story, as carvings of boats in frames are mounted like trophies. 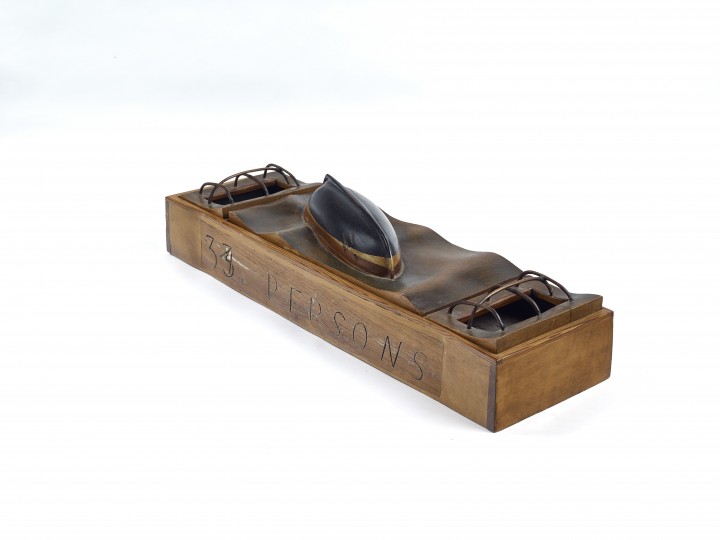 This sense of physical graft permeates throughout the exhibition, from the tools in pouches lined up in a row in Symbols of Survival (1976), to the photographs of the Cairns built on the Isle of Lewis to honour the Highland Clearances as part of the Memorials of the Heroes (1994-96) project.

Other memorials are more explicit. The boat in The Drowning (1983) is upside down and tomblike. Skye Fisherman, In Memorium (1989) is a dark homage to Maclean’s uncle. Then there is the tragic narrative of A Candle for Lubeck - a three-part installation commemorating the Second World War disaster that occurred when the RAF mistakenly fired on prison ships full of concentration camp survivors in the Bay of Lubeck.

Elsewhere, assemblages burst through the frame with hints of other worldly folk horror, as in the creepy carved face devouring wooden butterflies in Window Visitation, North Uist (1980), or the bony protrudence of Sildar Man(2010).

Suites of works include two collaborations with poets. A Catechism of the Laws of Storms (2014), features twelve pieces made in tandem with John Burnside. The Island Road (2013) is made up of seven images made alongside words by Kenneth White that evoke fragmented sense memories of times and places in Maclean’s epic voyage as seer, guide and explorer, navigating his way into the deep and beyond.

Will Maclean’s retrospective Points of Departure is exhibited at the City Art Centre, until 2nd October.