The Great Outdoors with the Fleming Collection 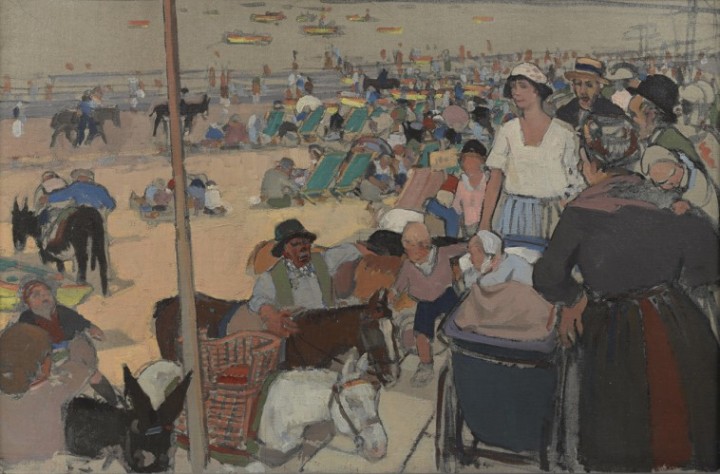 Edward Aktinson Hornel’s Children at Play [image below]of the 1890s is bursting with the joy of outdoor games. Hornel was born in Bacchus Marsh, Australia but grew up in Kirkcudbright. After studying in Edinburgh and Belgium, he met fellow Glasgow Boy George Henry (1858-1943) and they travelled around Japan together in 1893-94. In 1901 Hornel bought Broughton House in Kirkcudbright, where he lived for the rest of his life and which is now run by the National Trust for Scotland.

Children at Play is an important example of the pioneering work which Hornel made when pushing the boundaries of the decorative potential of representation. Whilst at once an accomplished orchestration of seven children enjoying themselves without inhibition, it also verges on the abstract, with form and space flattened to the extreme. The eye is lead around the canvas from group to group, from the pair at the upper left absorbed in shared observation, to the trio at the upper right, the middle member of whom grins out at the viewer. One part of the rough and tumble couple in the foreground can only be glimpsed underneath the playmate with whom she is wrestling. Action is mainly communicated by way of active legs, whilst the trees, bushes, flowers and grass by which the children are surrounded are rendered in blocks of warm colour. The overall effect is one of sunlit childhood freedom and friendship. 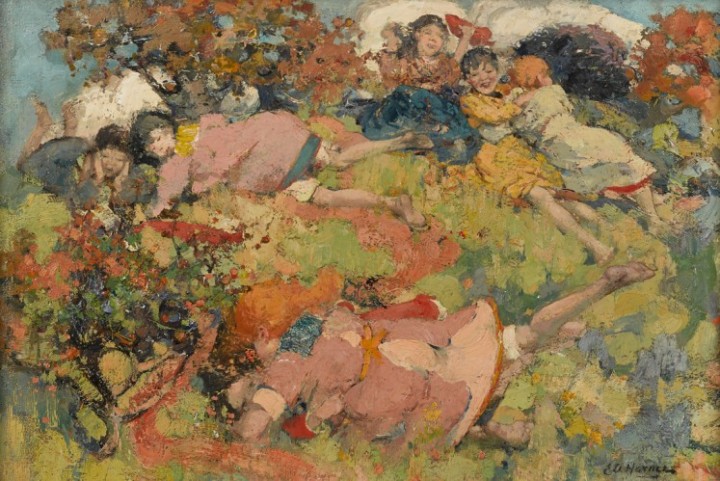 Fun for all the family is depicted in Bank Holiday, Portobello Beach of 1931 by David MacBeth Sutherland [main image above]. Born in Wick, Caithness, Sutherland studied in Edinburgh, Paris and Spain before joining the staff of Edinburgh College of Art. He married his colleague Dorothy Johnstone in 1924 and the following year they moved to the Edinburgh suburb of Joppa; it neighbours Portobello and both have popular, long sandy beaches.

In Bank Holiday, Portobello Beach Sutherland draws the viewer in by way of the family set-piece in the right foreground. Featuring the back of a woman on whose shoulder a baby sleeps, the adjacent family, its pram and toddler lead us to the man offering rides on the donkeys lined up around him. Their companions are being seen being led off and ambling along the beach, heading into regular lines of deckchairs. These dissolve into indications of figures paddling in the sea and out to boats in the water. Young and old alike are making the most of a break from work and routine. Although currently associated with recent photographs of crowded scenes at this very beach following the easing of lockdown restrictions, the legacy of this painting is the pleasure enjoyed by all generations during a trip to the seaside. 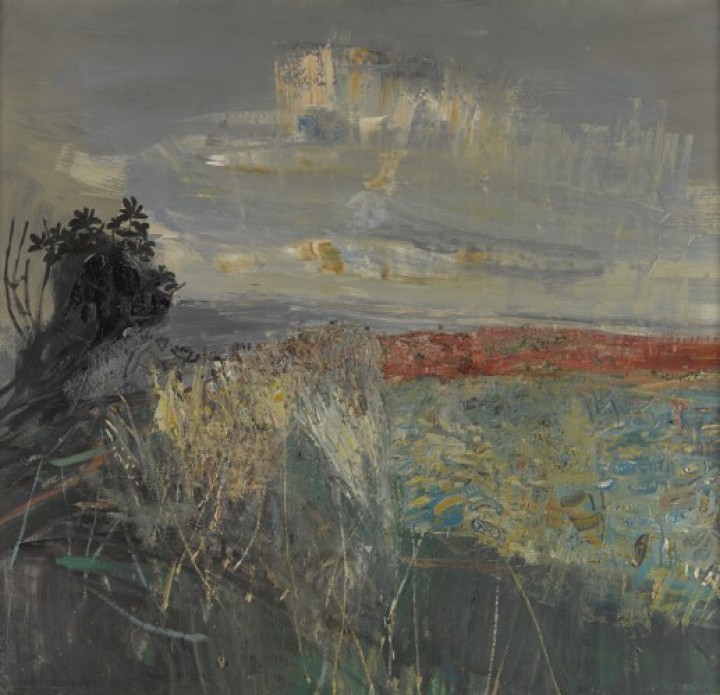 Joan Eardley, Field of Barley by the Sea, early 1960s © The Artist’s Estate

In contrast, Joan Eardley’s Field of Barley by the Sea of the early 1960s is unpopulated and focusses on the fecundity and power of nature. Eardley was born in Warnham, Sussex and moved to Glasgow as a teenager. She studied at Glasgow School of Art and Hospitalfield, Arbroath before establishing a studio in Townhead, Glasgow. In 1955, Eardley bought the modest cottage Number 1 The Row in Catterline, a remote fishing village on the north-east coast of Scotland; she thereafter spent a great deal of time in the area, where she developed a distinctive en plein air practice before her premature death.

Field of Barley by the Sea comes from a bravura series of large-scale works which Eardley made towards the end of her career. Almost square in format and spontaneously worked in thick paint on the spot, it conveys the sheer energy of Eardley’s natural surroundings. The visual and physical experience of elemental forces in field, sea and sky are directly communicated to the viewer. Scotland’s ever-changing weather is made clear in the tempestuous clouds, through which sun is able to shine at intervals. Spatial layering and depth, a vast array of mark-making and a palette based on earth tones add to the sense of immersion in the scene and the invigoration it provides. 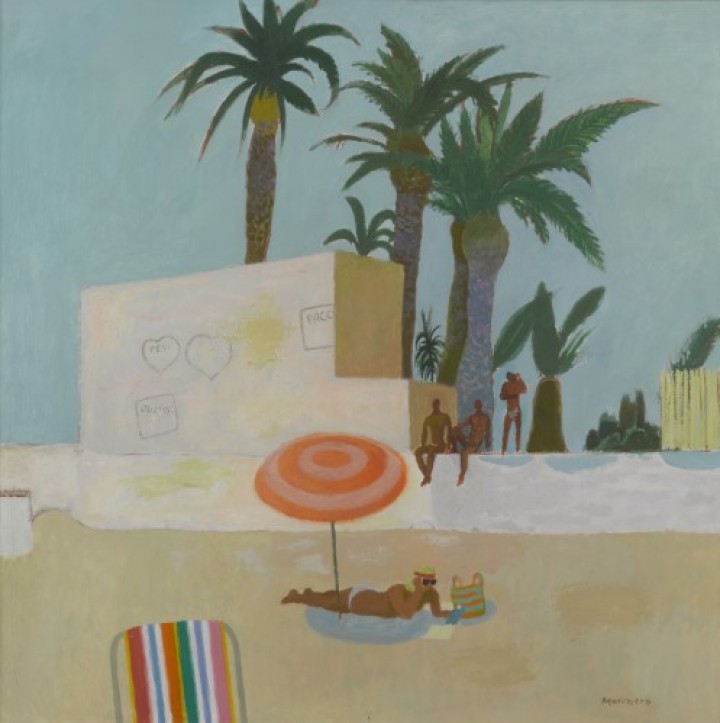 A different climate all together can be seen in Alberto Morrocco’s Love on the Costa del Sol of the late 1970s. Morrocco was born in Aberdeen to Italian parents. He studied at nearby Gray’s School of Art before travelling in France and Switzerland. After World War Two he joined the staff of Duncan of Jordanstone College of Art and Design in Dundee, where he remained until retirement. In 1950 he returned to Italy for the first time since childhood and visited regularly thereafter, as well as exploring the Mediterranean more widely.

Love on the Costa del Sol epitomises the archetypal summer holiday. A sole sunbather takes centre stage on the otherwise empty beach, lying on their front reading and shaded by a parasol. Three figures on a nearby sun-bleached wall are dwarfed by palm trees. The brightly coloured stripes of the beach chair in the foreground provide a visual link with those of the parasol and the green leaves silhouetted against the cloudless sky in the upper centre. Expanses of space are filled with a sense of warmth and relaxation. Time does not matter in an image which may provoke nostalgia for past holidays and longing for post-lockdown fun in the sun abroad.