Karla Black has been mining for gold for more than two decades now. Over that time, the accrued objects of her sculptural desires have often looked like they’ve been put together with stuff gathered from the mess of a playpen and transformed into retro-future relics occupying an adventure playground of the imagination. A decade on from Black’s Fruitmarket Gallery curated Venice Biennale show - the same year she was nominated for the Turner Prize - where better for Black to run riot some more than the former fruit and veg storeroom turned nightclub that makes up the Edinburgh gallery’s newly expanded space, now christened 'The Warehouse'.

The Fruitmarket’s existing galleries here house an array of Black’s older confections. Upstairs, almost the entire floor has become a pink powdered planet, with reels of cotton linking the threads that line its surface or else left dangling in a new iteration of Punctuation is pretty popular: nobody wants to admit to much (2008/2021). Downstairs, scrunched up brown paper and cellophane constructions held together (probably) with sticky-backed plastic hang in mid-air like makeshift hammocks on a desert island after a storm, or surprise birthday decorations of diplomatically indeterminate age. The party continues by way of smeared make-up bag reflections and what looks like Jenga played with slices of wedding cake that threaten to topple any second into the rouge-laden boudoir it’s been left inside. 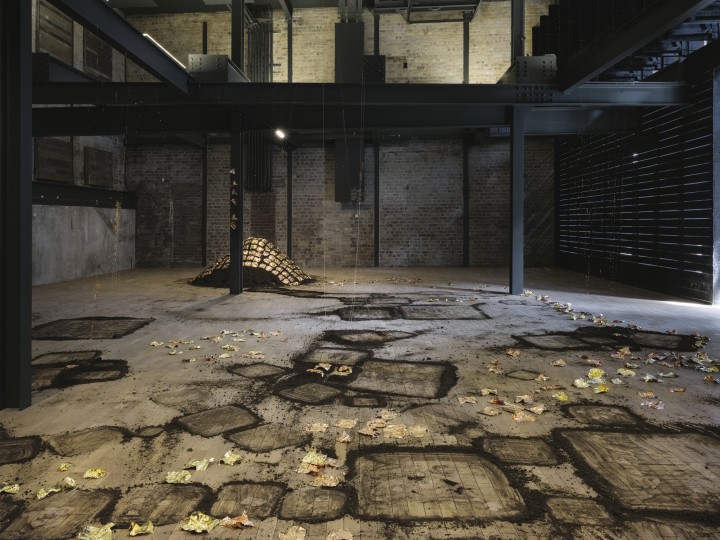 The best game of all is the surprise mystery tour along the corridor to the much darker Warehouse. Stripped back from its former fun palace finery to bare brick and steel, in the shadows, a small mountain of earth sits dappled with gold and copper leaf. From a distance, it looks like a tent draped in Christmas tree lights after dark. On the ground, the earth is patterned in a way that resembles cartoon tunnels with pictorial shapes made from the dirt  marking out fresh territory.

While nothing is actually dug up, the effect of this new work Black styles as Waiver For Shade (2021) is part architectural, part archaeological, as it gives a sparkly-attired nod to what was here before, while simultaneously setting down foundations for a bright new future beyond. Three new wall-based works reiterate the child’s play of all this with their smudges of paint and eye shadow that seep out onto the windows. Rather than treating the space with kid gloves, then, Waiver For Shade makes itself comfy and gets stuck in, never mind the mess. As it comes blinking into the light, it sets the tone for the shapes of things to come.

Karla Black – sculptures (2001-2021) details for a retrospective is exhibited at The Fruitmarket Gallery from the July 7th until October 24th 2021.