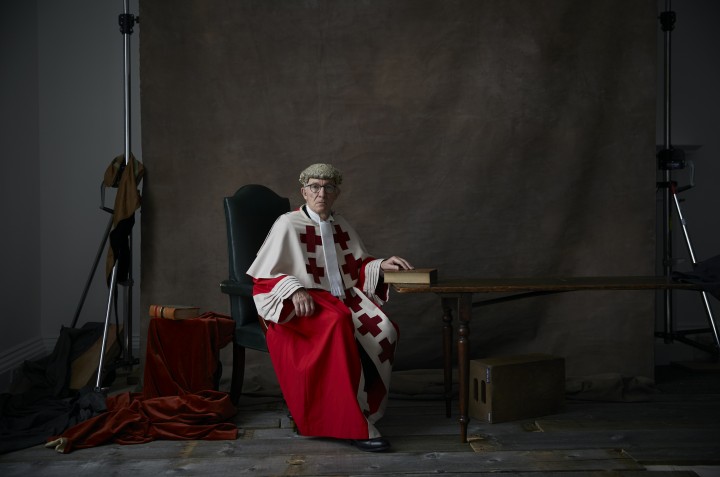 David Eustaces’s Thirty Two York Place photographic series combines tradition with the contemporary and a sense of place, to portray our hope and trust in the people who personify justice in Scotland.

The portfolio consists of images of twenty‐four judges, known as Senators of the Scottish College of Justice. It is named after the location in Edinburgh’s New Town in which it was made, in a studio steeped in Scottish art history. In 2018 Eustace gained access to this first‐floor, north‐facing room, which is dominated by an enlarged window, designed by the portraitist Sir Henry Raeburn in 1798; Raeburn worked in this space from that year until his death in 1823.

Eustace was immediately struck by ‘the energy of the building, quality of light and romance of the space’. However, it was to take almost two years to devise a project suitable to realise within it, accompanied by the threat of a sale to a new owner who would not support such a venture. 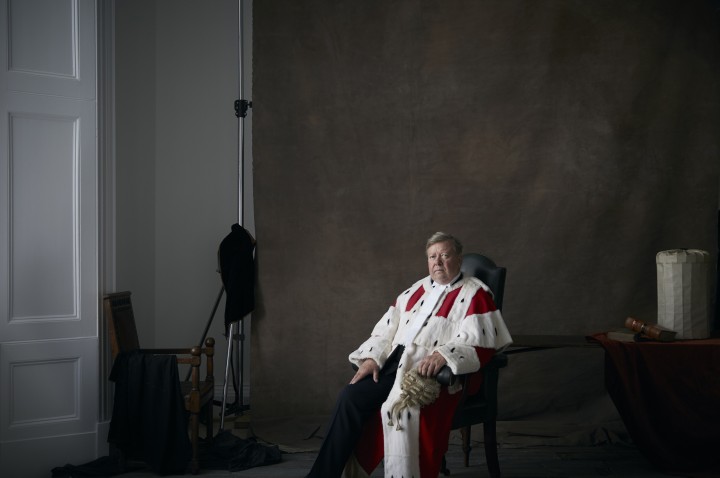 Inspiration struck during a dinner held at Parliament House, in which the Supreme Courts of Scotland are sited. As the guest of Lord Brodie, Eustace was seated beside the two most senior judges in the country, Lord Carloway, who is the Lord President of the Court of Session and Lord Justice General of Scotland and Lady Dorrian, the first female Lord Justice Clerk. On the surrounding walls were hung centuries’ worth of portraits of their successors. Eustace realised he was dining with the living subjects who embody enduring roles worthy of York Place.

During a lull in the Covid‐19 lockdown of 2020, Eustace welcomed his sitters to a minimal set which centred on a chair lent from the High Court of Judiciary and also featured three‐hundred year‐old legal books on loan from the Lord President’s office. His subjects brought their own robes and wigs, rich in the symbolism and hierarchy of their profession and at the centre of current debate over whether they should continue to be worn or not. Eustace views them as a reminder to the wearer of the responsibility with which they are entrusted when worn.

Eustace worked in collaboration with his sitters, who placed their reputations in his hands. Battling within himself to create something new, Eustace described the room as a ‘frame’ for the nascent series, often breaking the ‘fourth wall’ to show beyond the set to reveal the broader physical context in which he was working. This can be seen in his image of Lord Carloway, in which the natural light entering through Raeburn’s window highlights the black‐spotted ermine fur of the leading judge’s robe. To the left, the backdrop’s support and armchair tucked against the wall belie the scene‐setting on the right, of books laid on a table beside a ‘birdcage’ full‐bottomed‐wig‐box. 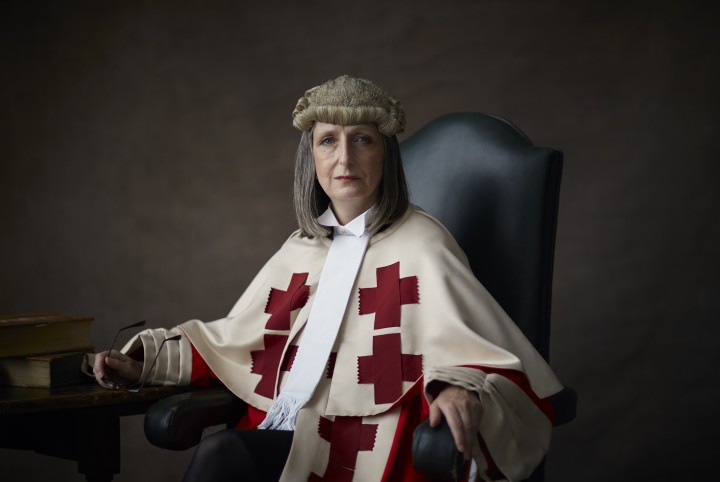 The seated Lord Carloway holds his bob‐wig in his left hand and looks directly at the camera, in a commanding yet benign pose. Whilst working throughout in landscape format, in order to give uniformity to the portfolio, Eustace employed a variety of compositions within the York Place series. The closer cropping of the image of Lady Carmichael means more prominence is given to her thick silk gown, the red crosses of its white cowl decorative references to their original use as fastenings. Be‐wigged and with her face half‐lit, half in shadow, Lady Carmichael’s solemnity is energised by the holding of her spectacles, in readiness for action. Her appointment as a judge of the Supreme Courts in 2016 came just twenty years after Lady Cosgrove became the first female Scottish judge.

Throughout the series, Eustace was concerned to explore “how the public view these figures and as a member of the public how we hope never to stand before them, yet must believe and trust in them.” This mixture of reverence and fear is embodied in his portrayal of Lord Brodie. The judge is seen from a respectful distance, seated and in full‐length. His gaze is unwavering, his hand placed on a book reminiscent of the swearing on a Bible required of Christian witnesses before they give evidence in court. Details such as the play of light on cuff pleats and fall fringe, as well as reflections off metal supports, add texture to the overall sense of gravitas conveyed. 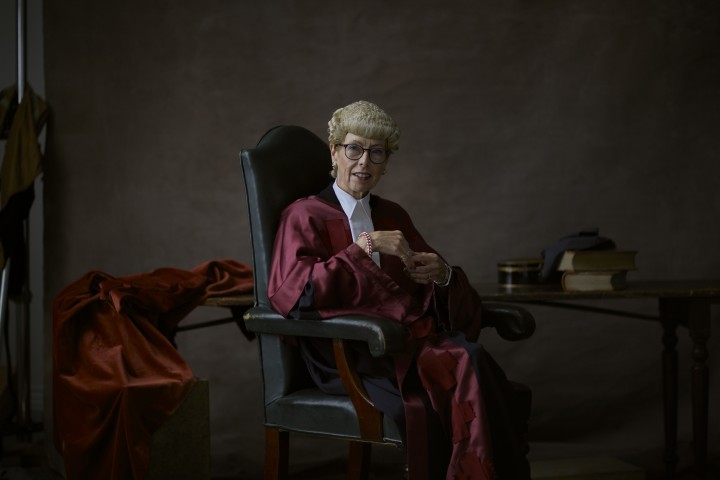 Having served in the Royal Navy and as a Prison Officer before training as a photographer, Eustace was in a unique position to convey the authority and dignity of the Senators’ professional standing, as well as the belief in and deference to them of the general public. Yet his images are also suffused with beauty and glimpses of individuality, as in his depiction of Lady Smith. A half‐smile indicates sympathy, even humour, whilst her jewellery, from prominent bracelet to signet and wedding rings, to a watch deep in shadow, reveals personal taste and hint at a private life beyond public office. The lusciousness of her burgundy gown, whose weight and tailoring is emphasised in the lighting of its folds, is echoed in the orange velvet draped in the background, whilst the reflection of light on the chair’s leather adds to the unexpectedly tactile dimension of this image.

As Eustace has explained about Thirty Two York Place, “this was a portfolio arrived at and nearly lost by the time it took me to find a subject”. Made at a particular point in Scotland’s history, when the legal requirements of curtailing the spread of coronavirus affected us all, it is at once contemporary whilst celebrating the historic. It is not a series of portraits, but rather a visualisation of the foundation of a just society, through the people who currently uphold its values. It is also a homage to a particular place and its history, as borne out in the portfolio’s sub‐title: “Modern Portraits in the Studio of Sir Henry Raeburn”.

The full portfolio can be viewed here. With thanks to David Eustace. Alice Strang is an Art Historian and Curator of Modern and Contemporary Art